"Little Women" will face-off the Big Men at the 92nd Academy Awards on Sunday, January 9th, 2020.

This year, the stories reflected in the Best Picture category are mostly male-driven works directed by men. Those titles include, "Joker," "1917," "Ford v Ferrari," "Jojo Rabbit," "Once Upon a Time... in Hollywood," "The Irishman," but "Marriage Story" and "Parasite" are more gender-balanced projects. "Little Women" looks up for more gender equality in every sense.

Most of the films qualifying in the main categories were screened in theaters in Los Angeles and New York in 2019. Looking back, the year 2019 will be remembered as one of the most uneven years in recent history. Optimistically thinking, with more productions directed by women and other communities, we will start seeing the #OscarsSoWhite like something from the past.

Many new Hollywood productions are oriented to close "the gender gap." The producers are also looking up for more "diversity and inclusion."

In the mid-time, we can relax, sit back and enjoy the admirable works that so many talented people in the industry brought us and who deserve recognition by the members of the Academy. "Honeyland" from North Macedonia opened in theaters mid-July, and it has two nominations, for best international feature film and for best documentary feature.

Nominations for the 92nd Academy Awards 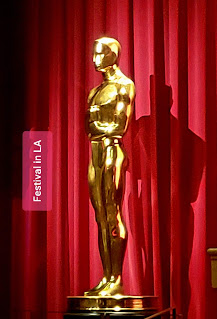 Related Articles:
The Academy Museum of Motion Pictures Opens at Last
MAKEUP & HAIRSTYLING - OSCAR WEEK 2020
Undine: Dangerous Liaisons in Berlin NINETEEN BEST FILMS OF 2019 - FESTIVAL IN LA
TWENTY BEST MOVIES OF 2020
THE BEST FILM FESTIVAL POSTERS OF 2019
THE WORLD'S BEST FILM FESTIVAL POSTERS 2020
Quo Vadis, Aida? The Perfect Depiction of a Genocide at The Balkans
Parasite: Accomplishes the South Korean Dream
The Painted Bird: In the Dawn of the Holocaust
Adam: Women’s Resilience in Morocco
Papicha: Girls Just Want to Have Fun and Freedom in Algeria
And Then We Danced: Folk, Love & Pride in Georgia
Honeyland: The Last Beekeeper of Macedonia
Invisible Life; Melodrama is Not Dead in Brazilian Cinema

Pain and Glory: Almodóvar's Blast from The Past
The Cave: An Underground “Elysium” for Children in Syria
Les Misérables: Boyz n the French Hood
“Birdman or (The Unexpected Virtue of Ignorance)” Flies High
“Roma” Anarchy and Repression in an Epic B&W Mexican Drama

“Les Misérables” Boyz n the French Hood
“Endless Poetry” The Atypical Universe of Alejandro Jodorowsky
Synonyms: A Good Jew in Paris
The Best Latina-Theme Movies in America
IF YOU ARE READING FROM A MOBILE DEVICE, CLICK: view web version FOR OTHER COOL FEATURES SUCH AS TRANSLATE POWERED BY GOOGLE, AN INTERACTIVE FILM FESTIVAL CALENDAR, AND MORE.
Festival in LA ©2020
Posted by Festival in LA at Monday, January 13, 2020