Papicha: Girls Just Want to Have Fun and Freedom in Algeria 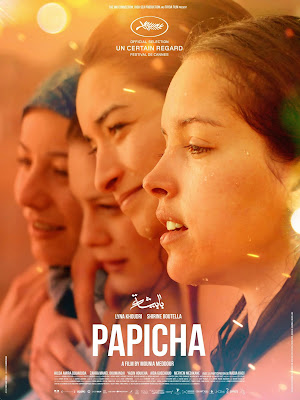 COLCOA REVIEW:  Vibrant and compelling, “Papicha” is a must-see drama with social content. The coming-of-age story is about the courageous young Muslim women claiming their place and time in a world of inequalities.

During the “black decade” of the 1990s, an oppressive system doomed women’s rights in Algeria. The Civil War in the African country brought them back to obscurantism. Director Mounia Meddour decided to move from making documentaries to direct her first feature loosely-based on her personal experiences around those tumultuous years in college.

When Meddour was a journalism student, she saw first-hand the uprising in her nation-state. Many wanted to leave - others, the daring ones who had to stay, experienced religious, political, and physical repression by the conservative system in power.


According to the director, during those dark times, men were awful. Also, ultra-conservative women were making religious propaganda in the streets. They were interrupting classes, attacking broad-minded girls by going to their houses and threatening them, violating their intimacy – forcing them to wear hijabs all the time.

At that age, female students want to dress up nicely, go out to the clubs, date, and have fun at the disco, like any other woman in the world.
While waiting for her Canadian Visa to leave the country, Nedjma's dreams cannot be placed on hold. As a serious design student, she won’t give up her fashion show so easily but cannot obtain fine fabrics. She improvises dresses with bargain fabrics to come up with original designs that will wow everyone. The other young women students from various fields of study join her on the runway show as an act of rebellion in their struggle for freedom.

The film does not show the authorities often, but they are a present dark force that moves in the shadows, repressing those who dare to be different.

The project took five years to make and many script drafts. The female director expressed that “Papicha” was hard to put together. For the authorities, the subject matter of the film is still a sensitive topic. Once she got financing, Meddour was able to show her country’s reality accurately and vividly, thanks to her background as a documentarian.

The opposition against women's liberation in Algeria has never seen so vividly and realistically until “Papicha.”

Meddour started production with mostly non-professional actors in the cast. The most challenging task in the making of the project was to edit the film because, in every take, actors had different dialogs. The director gave the actors plenty of freedom to improvise on the set.

The actresses had plenty of time to rehearse. They lived together in the same house for a week before filming. Their natural performances enlighten the screen, making out of “Papicha,” a delightful movie to watch.

Other contemporary films dramatize the women’s struggle for emancipation in the Middle East, such as this year’s Cannes Grand Prix winner “Atlantics.” Also, “Adam,” a cathartic film about women who want to live free from old biases. Another relevant project about sexual repression in Morocco is “Much Loved,” directed by Nabil Ayouch in 2015. “Mustang,” the French-Turkish Oscar nominee ends up in tragedy over women’s awaking. “Divines,” made in France, shows a young woman of color fighting for a chance to survive in a violent city.

The Afghan feature “Hava, Maryam, Ayesha” relates three feminist stories about their struggles dealing with chauvinistic men in their culture. Finally, the Canadian production “Antigone,” the story of a young African/Muslim immigrant struggling in Quebec's courts to keep her family together and out of trouble.

In many Muslim countries, men use religion as a form of oppression to submit women for their benefit. Women’s struggle in Algerian society gets a proper acknowledgment through this brave piece. Part of the Un Certain Regard competition at Cannes 2019, “Papicha” was also selected as the Official Algerian submission for Best International Film at the 92nd Academy Awards.

Daring and splendid, “Papicha” responds to the imperative necessity of World Cinema serving as a tool in the women’s fight for equal rights.

PAPICHA Oficial trailer
Related Articles:
Clara Sola: Defines Feminism and Magical Realism in Costa Rica
Annette: Swings Between “La La Land” and “Moulin Rouge!” Beautifully
Two of Us: Juliette & Juliette of Montpellier
COLCOA 23rd ANNIVERSARY
Adam: Women’s Resilience in Morocco
Les Misérables: Boyz n the French Hood
Cyrano, My Love: A Fine French Comedy of Love and Errors
The Painted Bird: In the Dawn of the Holocaust
And Then We Danced: Folk, Love & Pride in Georgia
Synonyms: A Good Jew in Paris
Invisible Life: Melodrama is Not Dead in Brazilian Cinema
Parasite: Accomplishes the South Korean Dream
Pain and Glory: Almodóvar's Blast from The Past
Honeyland: The Last Beekeeper of Macedonia
Shoplifters: The Universal Language of Stealing
The Art of Self-Defense: – Can Karate Cure Loneliness?
Endless Poetry: The Atypical Universe of Alejandro Jodorowsky
THE BEST FILM FESTIVAL POSTERS OF 2019
IF YOU ARE READING FROM A MOBILE DEVICE, CLICK: view web version FOR OTHER COOL FEATURES SUCH AS TRANSLATE POWERED BY GOOGLE, AN INTERACTIVE FILM FESTIVAL CALENDAR, AND MORE.
Festival in LA ©2019
Posted by Festival in LA at Thursday, November 21, 2019