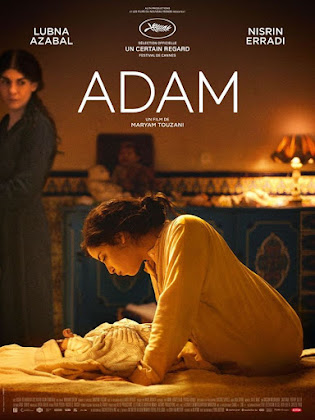 AFI FEST REVIEW: “Adam” is an inspiring drama about women’s resilience and determination against stigmatization in Morocco.
For some women, becoming a mother is an act of love. For others, it is a devastating, distressing, and confusing time. Every so often, it brings dishonor, shame, and misfortune.

“Adam” recaps three generations of Moroccan women who go through a unique loveless experience in an oppressive society, where religion controls every aspect of life – added to male dominance, women are struggling for their fundamental rights to work, love, and survive in their country.

“Adam” is a catharsis for women who want to live free from old biases in their society.

Alone in the streets of Casablanca, a troubled young pregnant woman named Semia, admirably played by Nasrin Erradi (“Catch the Wind”), is looking for shelter. Prejudices and stigmatization prevent peasants and residents from helping an outside sinner who is expecting - without a husband.

Semia’s misfortune may come to an end when she stumbles into a modest bakery owned by Abla, performed by the well-known actress Lubna Azabal (“Tel Aviv on Fire,” “Sofia,” “Goodbye Morocco,” and the Oscar nominee “Incendiaries”). Azabal plays superbly a mature woman hiding the reason why she can't love anymore.

Abla lives upstairs with her eight-year-old daughter named Warda - a curious girl who is looking for affection and feels a sudden attachment to the intriguing pregnant stranger just met.

Semia wants shelter until her son is born. Then, she will give him away and return to her community, and after that, her family will take her back as if nothing had happened.

Abla can accommodate the troubled lady for only three days before neighbors start to gossip about what’s going on in that house. She has enough problems of her own, with her daughter and her business. She can't give up any allowances so easily.

The interaction between the three women is edgy - as no one can externalize what they hide in their interior. But their lives will change dramatically after making some important decisions, give up their pride that will help them to build a strong bond in the newly created womanhood.

The complications keep the audience wondering how those relations will turn out for those resilient women who stoically have to confront their judgmental society and themselves.

The outstanding performances make the characters believable as they connect with their problems and their environment, such as the house, the business, their food, and the forbidden music.

When the actresses learned about the project, they wanted to read the script right away and give flesh to those stoic Moroccan women.

When director Maryam Touzani was a child, at her parents' house, she witnessed a women becoming a mother. After that meaningful moment, a maternal instinct was born in every woman in her home, including her.

Becoming a mother inspired Maryam to make a movie about motherhood. To tell her story freely, Maryam wanted to be as realistic and truthful as possible. “Stories of women need to be told by a woman's perspective. The point-of-view from a woman director can trigger a change in society,” Maryam Touzani expressed that at a Q&A after the presentation of her film at the AFI Fest 2019 in Los Angeles.

In recent years, Muslim women directors have raised their voices through cinema bravely. Many of them have followed their passion, finding their unique voices by narrating their personal stories with defined styles and esthetics.

Co-produced by Morocco, France, and Belgium, "Adam" is the astonishing Moroccan revelation of 2019. It was selected to represent the North African country for Best International Feature Film at the 92nd Academy Awards.

In “Adam’s” embryonic universe, women disbelieve each other, but they have to be brave and support each other to resist the oppression of their fundamentalist society in Morocco.

The three women carry an enormous amount of baggage, along with anxiety, grief, and depression. They have to find the precise moment to externalize those hidden desires and move on from their traumatic experiences before a baby is born.

This film’s pace reveals just enough to let the audience think, how the birth of Adam affects the lives of the struggling female figures.

Without falling into “feminist,” the film “Adam” is a catharsis that liberates women mentally, physically, and emotionally from an asphyxiating and claustrophobic environment. Motherhood brings them hope and a better understanding of the microcosm.

Eloquently and beautifully crafted, “Adam” makes us think – how lucky we are to be able to breathe without any restrictions because people can’t breathe freely in other parts of the world where women had to be resilient, stoic, and agents of change against oppression.

Related Articles:
Olga: The Ukrainian Gymnast Embodies Switzerland at the Oscars
The Academy Museum of Motion Pictures Opens at Last
Two of Us: Juliette & Juliette of Montpellier
Papicha: Girls Just Want to Have Fun and Freedom in Algeria
And Then We Danced: Folk, Love & Pride in Georgia
The Painted Bird: In the Dawn of the Holocaust
Honeyland: The Last Beekeeper of Macedonia
Invisible Life; Melodrama is Not Dead in Brazilian Cinema

Les Misérables: Boyz n the French Hood
Synonyms: A Good Jew in Paris
Parasite: Accomplishes the South Korean Dream
Pain and Glory: Almodóvar's Blast from The Past
The Cave: An Underground “Elysium” for Children in Syria
The Biggest Little Farm Transforms Land Into “Farmville”
The Art of Self-Defense – Can Karate Cure Loneliness?
Cyrano, My Love. A Fine French Comedy of Love and Errors
THE BEST FILM FESTIVAL POSTERS OF 2019


IF YOU ARE READING FROM A MOBILE DEVICE, CLICK: view web version FOR OTHER COOL FEATURES SUCH AS TRANSLATE POWERED BY GOOGLE, AN INTERACTIVE FILM FESTIVAL CALENDAR, AND MORE.
Festival in LA ©2019
Posted by Festival in LA at Tuesday, May 19, 2020 No comments: