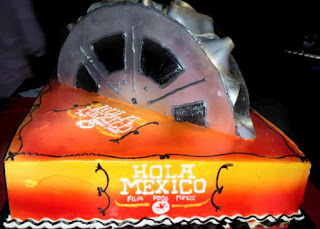 Hola Mexico Film Festival 2015 had a big Fiesta in Los Angeles a few days ago and left us with a great impression - The audience, the press, the sponsors, and the talent were content.

All the shows started on time and most of the directors were present for the Q&As, the red carpets and the after parties were great. 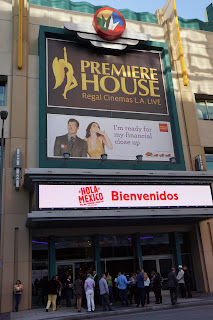 The films were surprisingly good and the LA LIVE Regal was a pleasant venue.

Hola Mexico, in nine days, showcased 22 quality films from South of the Border with a record of attendance of 25,000 movie goers - Some films like "Gloria," "La dictadura perfecta/The Perfect Dictatorship," and "El Americano" were completely sold out.
Samuel Douek, founder and programmer of Hola did a fine job creating enough buzz to consider the Mexican cinematic fiesta as one of the best film festivals in Los Angeles.

Hola Mexico will remain to grow with numbers of films, fans, events, and sponsors in the years to come. 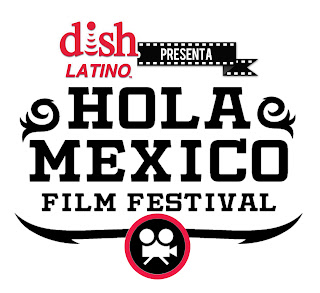 Hola Mexico will continue enriching itself by having all films subtitled in English.

Prior the festival, press screenings could spread the word to audiences and US distributors busting the opportunity for Mexican films to hit the movie theaters in the US sooner.

Many films presented in Hola won prizes at festivals around the world, including "Club Sandwich," "Las horas contigo," "Mexico Bárbaro," "La dictadura perfecta" among others.

With mariachi, tequila, concerts and special events, the 2015 edition of Hola Mexico has been the best.


And the top ten Mexican films in Hola Mexico 2015 were: 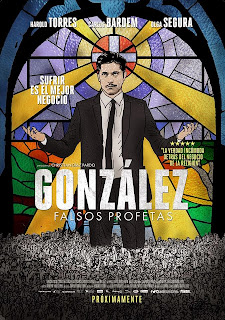 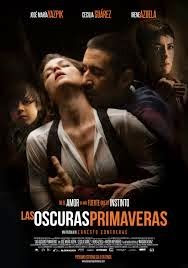 Directed by Ernesto Contreras.
☆☆☆
3.
Alicia en el País de Maria.
(Alice in Marialand).
A sophisticated, fast string to another dimension feature.
Dreams and sexual obsessions blind the characters.
A case of mistaken identity that invites to follow it.
Staring two of the new divas of Mexican Cinema:
Barbara Mori and Stephani Sigman (the new Bond Girl). 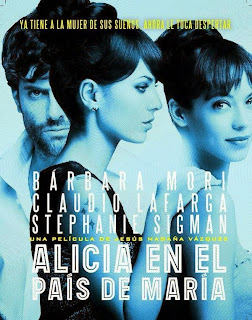 Directed by Jesús Magaña Vázquez.
☆☆☆☆
4.
El Mas Buscado
(The Most Wanted).
Clever and twisted.
Based on a true story of a
famous mariachi by night and a bank robber by day. 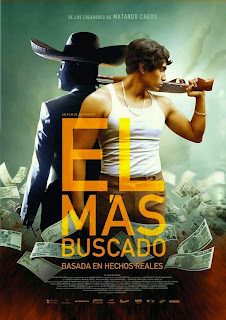 Directed by José Manuel Cravioto.
☆☆☆☆☆
5.
East Side Sushi.
A wonderful story of a woman fighting for her dreams.
From the East Side of Sacramento, a woman gives up her fruit vending cart for a more steady job in a Japanese sushi place.
She is so good with the knife that fast learns how to make sushi.
The competition with the other male cooks will backfire on her.
HOLA MEXICO AUDIENCE AWARD WINNER 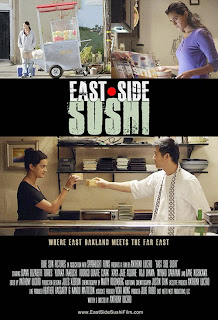 Directed by Anthony Lucero.
☆☆☆☆☆☆
6.
La dictadura perfecta
(The Perfect Dictatorship).
A powerful and scandalous film about the Media and Politics in Mexico.
The fame of the director is due to his controversial and poignant films, such as:
"La ley de Herodes/Herod's Law," "El Infierno/El Narco."
SOLD OUT! 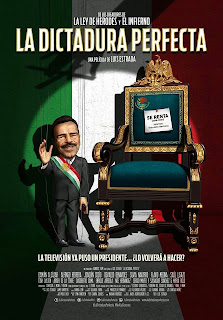 Directed by Luis Estrada.
☆☆☆☆☆☆☆
7.
El Americano, The Movie.
The 3D animation made a big splash with clever Spanglish dialogs and colorful characters.
A very well made story
with deep feelings and excitement for adventure.
RED CARPET GALA. 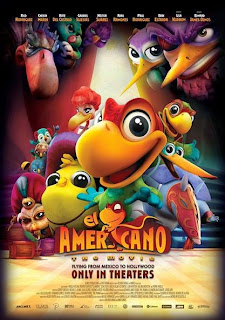 Directed by Ricardo Arnaíz.
☆☆☆☆☆☆☆☆
8.
Tiempos Felices
(Happy Times).
A serious comedy about a breaking-out and a crazy agency who take advantage of the naive people who hire their services. 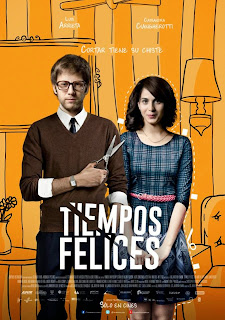 Directed by Luis Javier M. Henaide.
☆☆☆☆☆☆☆☆☆
9.
Eddie Reynols and the Steel Angels
A great surprise, enjoyable.
A musical for the middle-aged and the youngsters too.
To all who love the rock en español. 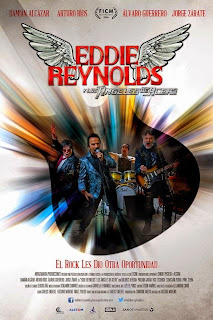 Directed by Gustavo Moheno.
☆☆☆☆☆☆☆☆☆☆
10.
Matria.
An eye-opening  documentary about the Mexican Revolution of 1910, Masons, and an army of 100,000 Charros against a possible invasion of Nazis to Mexico during the 1940's.
Director and video artist Fernando Llanos unveils family secrets. This film about Fernando's Grandfather's past made uncomfortable to a more than one member of his own family.
A most see! 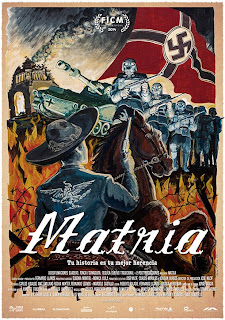 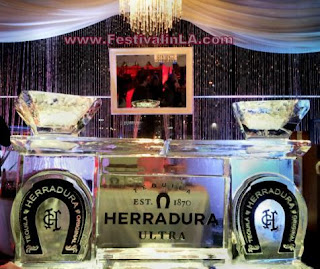 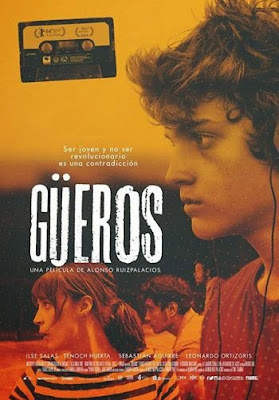 AFI FEST REVIEW: Radiant and bold. “Güeros” is a gem sculpted by the new brilliant generation of filmmakers approaching from Mexico!
“Güeros” is a portrait of a confrontational generation we are not aware of, but allows us to discern their existence and purpose in time.


Director Alonso Ruizpalacios had something in mind: to transcend a larger-than-life film reflecting the soul, music, culture, and the effervescent youth of Mexico City in the form of a poetic love letter.

“Güeros” has the style of “Y tú mamá también” and the fresh look of “Lake Tahoe.”

The director’s real inspiration was “Los Caifanes/The Outsiders” by Juan Ibañez (1966), one of the best independent films in Mexico's history.


Set in 1999, a fair-skinned teenager named Tomás is sent by his tiresome widow mother from Veracruz to live with his dark-skinned big brother Sombra, played by Tenoch Huerta (“Deficit,” “Days of Grace”), to Mexico City.


Sombra has depression and panic attacks, ironically, the doctor (director’s own cameo) recommends a vacation in Veracruz. 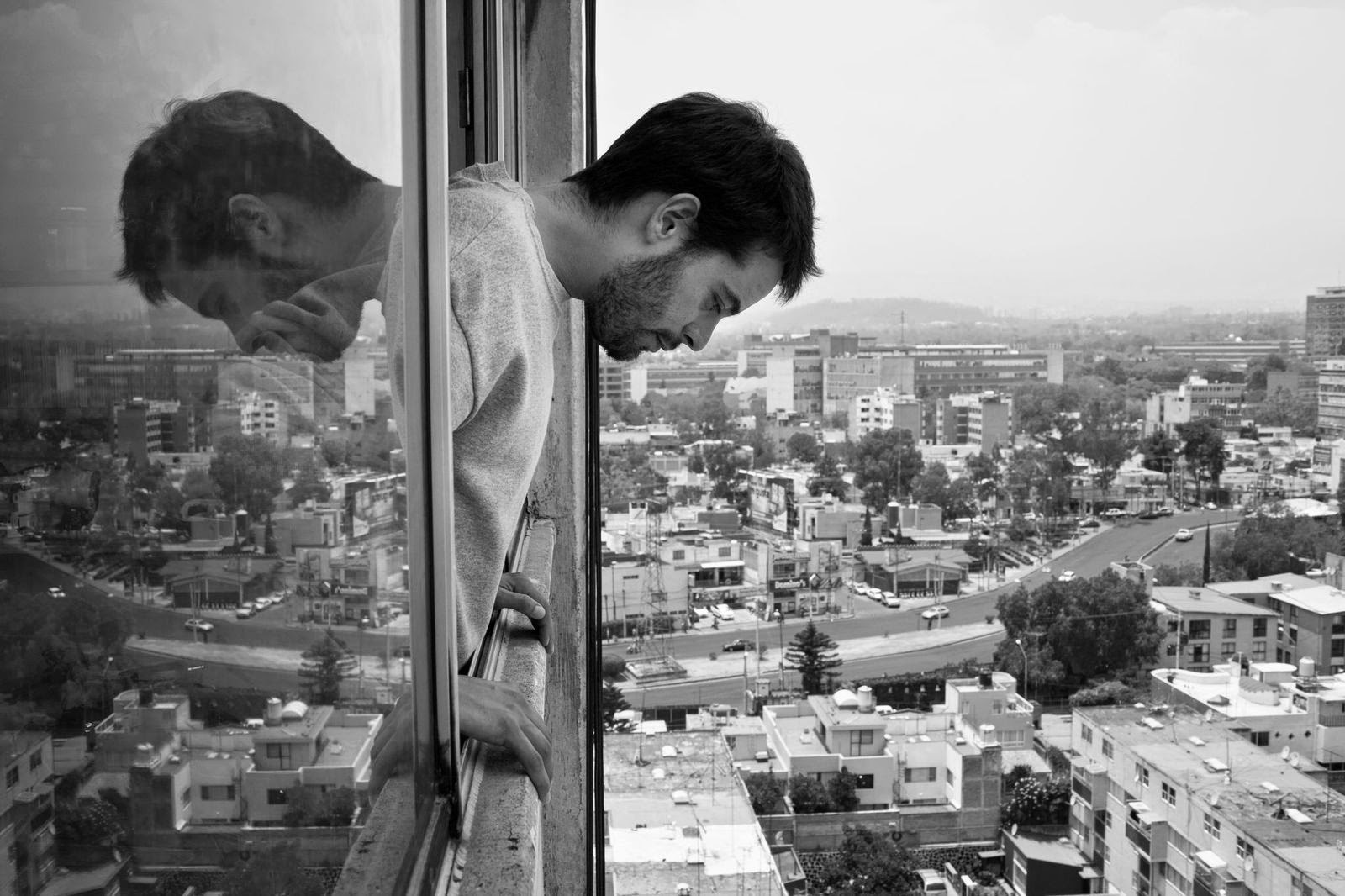 One of Mexico's endless conflicts is the battle between "güeros" and “morenos” (light-skinned v. dark-skinned), also discussed in Carlos Reygadas “Post Tenebras Lux” and hundreds of other Mexican films, the difference is that in “Güeros” is more subtle.”

Sombra and Santos are students at the U.N.A.M. (National Autonomous University of Mexico). The college is closed due to the student’s strike.

As “outsiders,” they are questioning the actual ideology of the movement that is conflicting with their own ideas, goals, economy, and the country’s future.

As they witness the anarchy on Campus, a sentiment of Nostalgia for their 'Alma Mater' is felt. 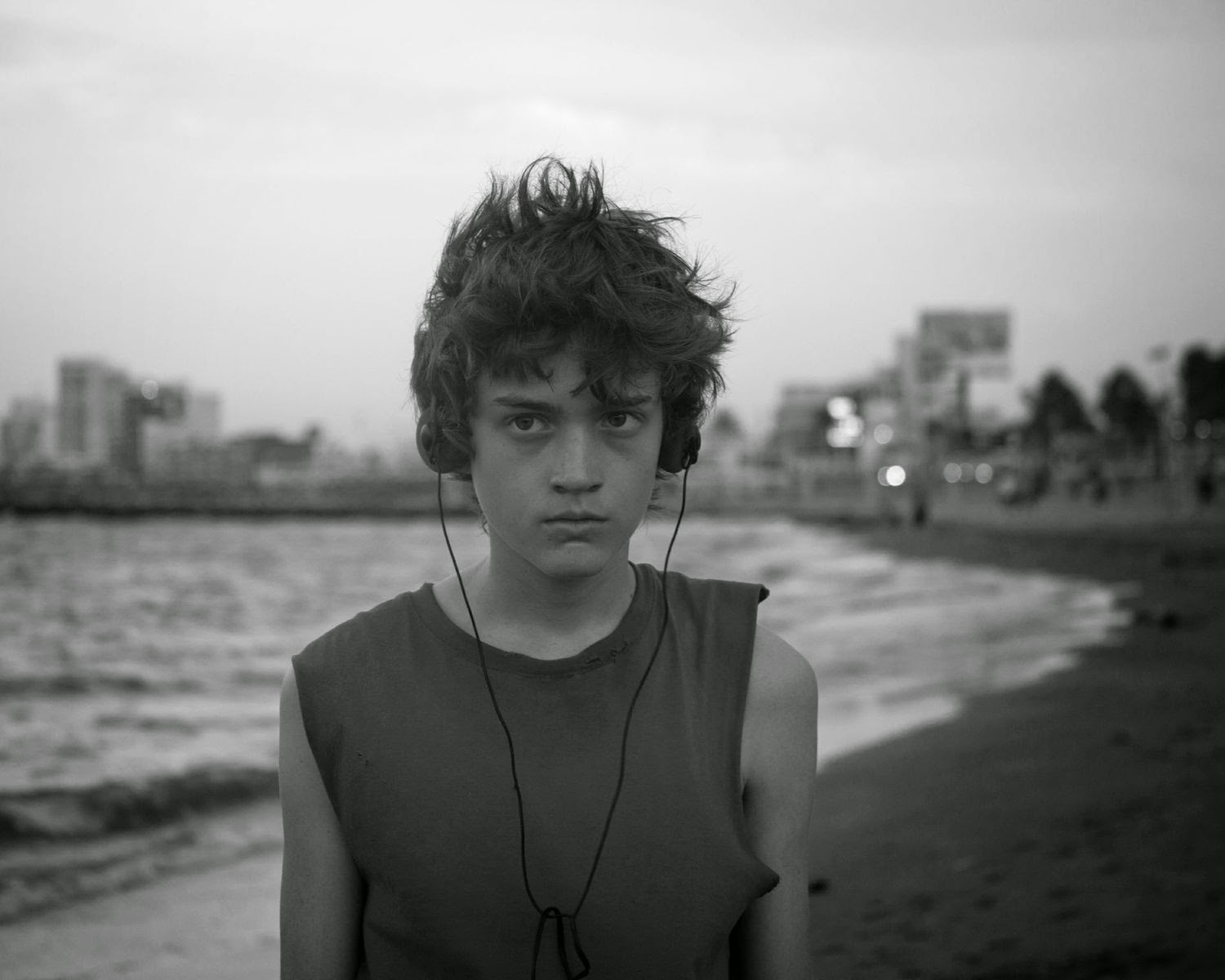 The only remembrance little Tomás has of his father is an audiotape of a folk-rock singer Epigmenio Cruz that he listens obsessively on his walkman.

A series of unfortunate events push them in a quest for the dying, forgotten, and mythical singer.

They travel from their old apartment building in the north of the city to the south where they face the dangers and paranoia of hostile environment - nothing that a humongous bottle of Cerveza "Caguama" can't cure.

At the chaotic University, they meet Ana (Ilse Salas). She is the leader of the student movement and also a radio personality at the rebel underground radio station - The same station the guys were listening in their car earlier. 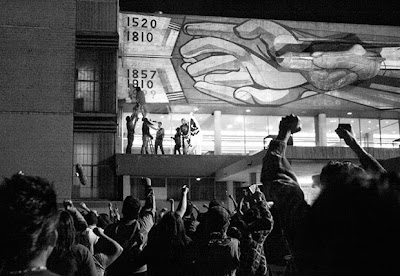 She needs a break from the conflict and therefore joins them in their quest for Epigmenio.

The quartet doesn't give up and continue their trip from the South of the City to the Chapultepec Zoo to get more clues. Then, to the Zocalo (Mexico's City Downtown), where they will have their "La Dolce Vita" moment at a fancy pool party, where they get in trouble again.

They go from the Centro to their final destination, a Cantina located in the East-neighbor city of Texcoco. Inside, the TV-set has Juan Gabriel on singing "Hasta que te conocí/Until I Met You," which it plays along very well with the scene's climax.
The performance of the charismatic actress Ilse Salas is dominant. Her fresh looks and big eyes remind us of the Italian actress Giulietta Masina (Fellini's lifetime partner) - ("Juliet of the Spirits," "The Nights of Cabiria," "La Strada"). 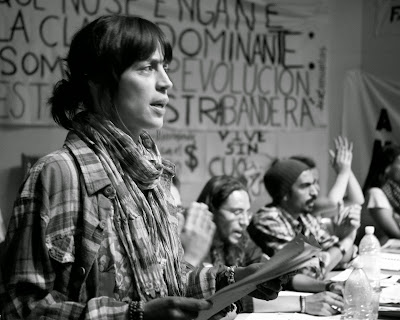 Ana fights against the misogynist 'macho' men yelling at her they want to see her breast, not the leadership of a woman.

Young Tomás is played by talented new actor Sebastian Aguirre. He has the strength and the right heart to allow the audience to see the world from his own perspective. 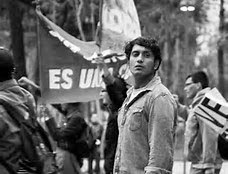 On the other hand, the character of Sombra takes too long to come to terms with the reality of the plot. One can understand his depression and traumas, but one or two good speeches of his are not enough to reach out to his full potential.

By trimming down a few unnecessary shots, this film could render at a faster pace to its already "black and white" 'artsy look.'

"Güeros" is a rare Mexican film with global reach, universal emotions, and likable characters. The nostalgic film's music, poetry, and lyrics hide a deeper meaning to the story.

The well articulate script connects brotherhood, friendship, the entire and enigmatic Ciudad de Mexico with the “Youth in Revolt.”

“Güeros” is not a political statement, it does not support the left or the right wing. Existentialism present in every life of those four great characters. They are focused on surviving and also in reaching an emotional fulfillment in a cosmopolitan city full of contrast.

“Güeros” is part of a new and diverse Mexican Cinema in search of the global audience. In the past twelve years, Mexico's film production went from 12 to 120 movies a year, a 100% increase.

Due to the awards in festivals around the World and the Oscars that Mexican directors have won in recent years, some publications wrote: “Hollywood loves Mexican directors, but hates Mexican movies.” That’s one of the main reasons why not many Mexican films get distributed in the USA.

In a more optimistic arena, things may change in a 'Fair Play,' a trade in a market where diversity should be the ultimate goal.