“The Mole Agent” is a triumph of the human spirit! It is the most original, intelligent, charming, and endearing movie of the year. This Chilean documentary tackles elderly neglect straightforwardly with honesty and tenderness.

The narrative starts when A CLIENT wants to prove a case of elderly abuse against her mother in a nursing home in Chile. She contracts a detective agency that can send its best agent to the mission - someone who can pass unnoticed by the caregivers and the other retirees in the facility.

Rómulo Aitken, the head of THE INVESTIGATION AGENCY, is in charge of replacing the previous agent - due to a broken hip.

The agency’s NEWSPAPER AD states that it is looking for a serious candidate, a man between 80-90, for the investigator’s position. 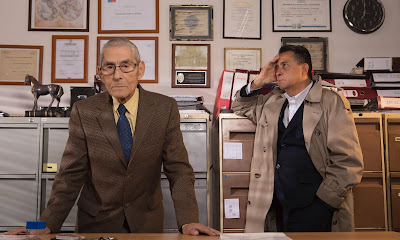 THE INTERVIEW AND SELECTION run smoothly. Twenty applicants fit the profile, and three seem viable – only one is more thoughtful and formal for the job. His name is Sergio Chamy.

Finding Sergio was a “happy accident” for the agency and the filmmakers. The determined and meticulous ninety-year-old newest agent can take over the entire investigation. Sergio’s mannerisms, accent, and impeccable behavior make him look like a well-trained actor, but he is natural, charming, and attentive. 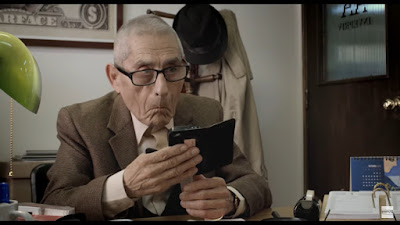 THE TRAINING includes using a cellphone, camera, texting, recording devices, and other GADGETS every elderly investigator should know, including WhatsApp, an application that many of us do not even know how to use.

Inside THE INSTITUTION, the agent must blend with all the other elderly patients and look like a “normal grandpa” and not arouse suspicion. 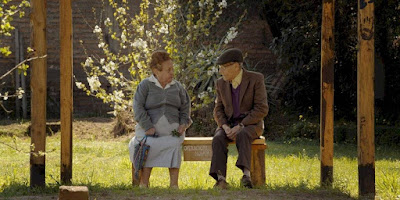 THE ROMANCE is an unexpected part of every hero’s journey when a coquettish woman wants to date Sergio. He acts like a real gentleman by respecting her without breaking her heart.

THE TARGET is hard to find, and it becomes like looking for a needle in a haystack. Sergio’s perseverance guides him to her room. Still, his clumsiness with the gadgets forces him to be more discreet and never look conspicuous or nosy to the nurses or other employees.

THE POET lights up everybody’s story.

THE SUSPECT seems to be in trouble, and Sergio must find what it is.

THE CONFLICT is more complex than it seems to be. It has a profound social background that resides inside every family, and how we tend to forget those who gave us life at the end of their lives.

THE RESOLUTION comes as a shocking revelation that no one sees coming. It is almost a biblical lesson to learn, “who is free from sin cast the first stone.”

RELIGION is essential to the residents’ lives, as we see some religious motifs that comfort them.

“The Mole Agent” is the work of a genius coming from a blossoming director Maite Alberti, who repeatedly mentions that making this film was fun in various virtual Q&As.

The editing follows the storyline straightforwardly and professionally, focusing on a spy movie structure. After that, everything else felt organic, multi-layered, and complex. She emphasized not directing the subject to do not alter Sergio’s natural execution. Making that decision was risky for her, but she had to let Sergio go and live his experience in front of the camera to his fullest.

The director lied a little to have permission to shoot the film inside the facility. She suggested that the film’s attention be centered on Sergio, the newest arrival, without interrupting the lives of others.

When principal photography was done, and the crew left the place, they had to come out with the truth. To come clean, Alberti organized a private screening at the nursing home and mentioned her true intentions. The relationship they constructed inside the facility was real. When they had to say goodbye, it was not much about losing a resident but winning a friend.

As a filmmaker, Maite Alberti followed her instincts. Inside the institution, she ensured everyone felt comfortable with the camera. Maite also found out some interns have dementia to sign the release form, and she ended it by getting the approval of a family member.

“The Mole Agent” is so well-made that it may confuse the viewers. Some have the feeling that everything is artificially made. They think it is not a documentary due to the residents’ spontaneous reactions and natural performances. They seriously believe that “El Agente Topo” is a mockumentary because it was directed by professional actors, a script, and a big budget. The truth is that this linear story was meticulously planned and naturally performed by real people, elements that make it look like a “narrative feature film.” However, everything in this vivid documentary is real. Cinema verité style shows real people in everyday situations and authentic dialogue. Following the residents’ natural actions, the director validated this excellent and engrossing docudrama.

The crew arrived three weeks before the shooting, giving residents and caretakers time to adapt and act normal in front of the camera. During the four months of principal photography, they worked six days a week and waited patiently to capture the precise moment due to the residents’ daily routines.

The Chilean Academy selected this co-production between Chile, Netherlands, Spain, Germany, and the United States to represent the South American country at the 93rd Academy Awards in the Best International Feature Film category.

This production has been nominated for twenty-four awards around the world. It qualified in the documentary category - gaining an Oscar nomination for Best Documentary Feature. “The Mole Agent” is one of the few projects representing the Latino community in a year where people of color got more recognition by the Academy and other essential Guilds and awards than Latinos.

“The Mole Agent” is a heartwarming story that makes us reflect on our aging population. This Neo-Noir documentary centers on creating an enduring universe where all the players who live, love, and die in a nursing home are real.

“THE MOLE AGENT” OFFICIAL TRAILER
Related Articles:
Clara Sola: Defines Feminism with Magical Realism in Costa Rica
Endless Poetry: The Atypical Universe of Alejandro Jodorowsky
Under the Volcano: The Golden Era of a Recording Studio in the Caribbean
Laura Pausini: Pleased to Meet You, Recounts the Life of the Italian Megastar
Quo Vadis, Aida? The Perfect Depiction of a Genocide in The Balkans
A Fantastic Woman Love, Grief, and Compassion in Santiago
Two of Us: Juliette & Juliette of Montpellier
Tove: Bounded by Art, Love, and The “Moomins”
Gunda: An Emotional Journey of Pigs, Chickens, and Cows
Parasite: Accomplishes the South Korean Dream
The Painted Bird: In the Dawn of the Holocaust
And Then We Danced: Folk, Love & Pride in Georgia
“Synonyms” A Good Jew in Paris
“Roma” Anarchy and Repression in an Epic B&W Mexican Drama
“Birdman or (The Unexpected Virtue of Ignorance)”
THE WORLD’S BEST FILM FESTIVAL POSTERS 2020
THE WORLD’S BEST FILM FESTIVAL POSTERS 2021
TWENTY BEST MOVIES OF 2020
The Best Latina-Theme Movies in America
The Academy Museum of Motion Pictures Opens at Last