Synonyms: A Good Jew in Paris 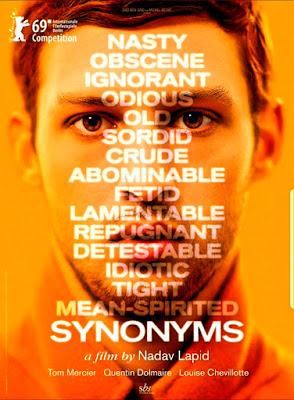 “Synonyms” is an urgent cry for freedom, sublime, and obsessively poetic. Unmissable and beautiful. Pure Bertolucci! 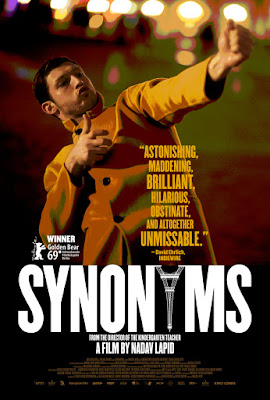 Recently, antisemitism, Far-right politics, and extreme Nationalism have been increasing activities in Europe, and many French Jews are fleeing to Israel.

Ironically, young Joav is magnificently played by newcomer Tom Mercier. Upon his arrival in Paris, he felt the urgency to become a French citizen.

Joav is an Israeli army deserter suffering from PTSD. His memories of abuse and brutality experienced in his nation blend in with an explicit dehumanization of his persona.

When Joav arrives in the city, he falls asleep in the bathtub of an empty apartment located in a fancy neighborhood of Paris. When he wakes up, all his belongings are gone. Back to the tub and to a near-death experience of hypothermia, a young Good Samaritan couple comes to the rescue.
Emilie (Quentin Dolmaire “Godard Mon Amour”) and Caroline (Louise Chevillotte) are a wealthy pair who want to fulfill their intellectual needs by playing dangerous games with Joav recklessly.

They feed him, dress him, and give him cash. At one point, Emilie wants Caroline to marry Joav to become a French citizen sooner. What a lucky boy! Their generosity comes with an exorbitant price tag because nothing is for free in life.
“Synonyms” is an existentialist masterwork with a series of complicated events that inspires its audience to dig more into the true meaning of friendship, origin, nationality, dignity, and self-respect.

While working at the Israeli Embassy, Joav creates chaos by trying to help people in need of shelter. The symbolism and political correctness of the film reach their climax through an extreme event that pushes boundaries and international borders, metaphorically speaking - comparing Joav’s liberal actions versus the politics of Israel toward Palestinians.

Joav’s only weapon is a French/Hebrew dictionary, where he can find many words to recite. The only way to survive in the classist French society is to speak Victor Hugo’s language to perfection because Joav knows it is never too late to save his soul.

After graduating in philosophy from Tel Aviv University, visionary Director Nadav Lapid (“Kindergarten Teacher,” “Policeman”) went to live in Paris at the end of his military training in Israel. He had a mission to clear his mind and to become a French citizen, something reflected in his compelling body of work, mostly in his latest work, “Synonyms,” a masterpiece!

To write the 2019 Berlin Golden Bear winner, Lapid centralizes the story on the main character’s journey and his wealthy friends.

The director’s semi-autobiographical work shows many layers of the story through Joav’s conflicting personality. Not only the inner force and self-determination of maintaining his goal till the end, but it contradicts the purpose of the preservation of Israel Zionism as well - because his background plays a big part in his life.

As a paradox in the story, Joav is a soldier who deserted his country, then emigrated to France to be alienated by the Parisians.

When Joav’s father went to Paris to bring him back to Israel. Joav does not want to hear the message from his mother, and nothing can change his mind. He maintains himself reluctant towards his Israeli nationality.

In the Land of Israel, the confrontational attitude of generations is evident - the older adults speak Hadith, the younger Hebrew. The new immigrant sings the Marseillaise in France better than any French-born citizen.

“Synonyms” appeals to the human spirit by showing the vulnerability of the main character in a very dehumanized society.
“Synonyms” is a social and political manifesto.

The controversial film shows an idealistic young man’s struggle to adapt to a new country, managing the conceptualization of freedom, opportunity, equality, indulgence, range, unrestrained, and rope. Under other conditions, he could implement loyalty, gratitude, and righteousness upon his persona.

When the rich abuse the poor, the thin line of trust breaks. A moment of awareness plays a big part, and it is when the player doesn’t want to play anymore.

In the new land of opportunities, no man should continue pushing his luck in dangerous conditions.

In “Synonyms,” one crucial question arises, how far can a player carry on the dangerous “game of life” affecting the lives of others viciously and without any rules?
Synonyms – Official U.S. Trailer

Three Thousand Years of Longing, George Miller’s Lavish Genie Tale
The Academy Museum of Motion Pictures Opens at Last
Two of Us: Juliette & Juliette of Montpellier
THE BEST FILM FESTIVAL POSTERS OF 2019
THE BEST FILM FESTIVAL POSTERS OF 2018
COLCOA23rd ANNIVERSARY - THE FRENCH FILM FESTIVAL
The Painted Bird: In the Dawn of the Holocaust
‘Cyrano, My Love’ A Fine French Comedy of Love and Errors
“Honeyland” The Last Beekeeper of Macedonia
“Tigers Are Not Afraid” And the Lost Boys & Girls of Mexico
“The Great Hack” Faces Up To Ethics and Technology
“The Silence of Others” Speaks Up Amnesiacs in Spain
“Shoplifters” The Universal Language of Stealing
“Roma” Anarchy and Repression in an Epic B&W Mexican Drama
“Cezanne and I” An Extraordinary Journey of Art and Friendship
IF YOU ARE READING FROM A MOBILE DEVICE, CLICK: view web version FOR OTHER COOL FEATURES SUCH AS TRANSLATE POWERED BY GOOGLE, AN INTERACTIVE FILM FESTIVAL CALENDAR, AND MORE.
Festival in LA ©2019
Posted by Festival in LA at Thursday, October 03, 2019