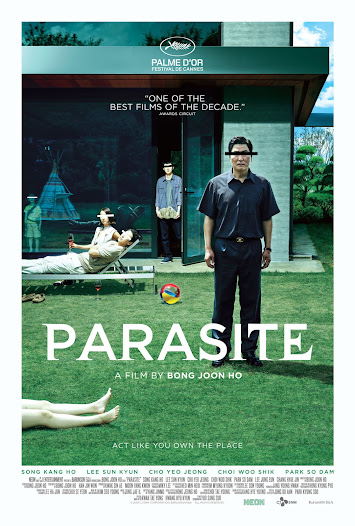 “Parasite” is the most outstanding, hilarious, intense, and politically diverse movie of the year.

In “Parasite,” Joon-ho shows no mercy picking out the differences between rich and poor. Joon-Ho's humanistic approach is undeniable, maintaining a high level of respect for his characters regardless of their economic status, nor to their true intentions – since none of them are genuinely evil by nature or utterly uncorrupted by the system.

The South Korean story takes epic proportions resembling an authentic Greek-tragicomedy thru a Universal theme of class-struggle and life-irony.

The symbolism of this film has a truthful meaning accordingly to their social-status. For a wealthy family, the rain represents a natural way of cleansing and abundance. For the poor, it is a catastrophic chain of events that can wipe them off the face-of-earth – it is almost like fumigating “parasites.”
The incredible journey of trickery and scams begins with Kim Ki-woo performed by the young and talented actor Woo-sik Choi (“Okja,” “Set Me Free”). The sneaky college dropout takes the opportunity to work as an English tutor at the Park’s residence.

As is usual, poor people’s ambition has no limits. It is almost like rich people, they can't stop working because they desire more wealth.

Ki-woo also sees the chance to have his sister Kim Ki-jung (So-dam Park) tutoring art to a disobedient preschooler, who is interested in surreal self-portrait painting, and American Indian wildness.
Kim’s family's determination to take over the house causes the firing of another key member of the Park’s staff.

The patriarch of the Kims, Ki-taek, is played exceptionally-well by the renowned actor Kang-ho Song (“A Taxi Driver,” “Thirst,” “The Host”). He enters the house as the chauffeur. Aware of not crossing the line, his body odor of poor people causes wealthy family's aversion.

In the real world, rich and poor can't get that close because of the odor. The smell reveals social status, type of job, quality of food, behavior. In South Korea, people responded to the sense of smell right away. The scent is something we can't talk about in public, but it is an inherent characteristic of all human beings.

The idea of making “Parasite” came out in 2013, during the post-production of “Snowpiercer.” While Joon-Ho worked as a college tutor, he met an impoverished young student employed in a wealthy family’s house. The director went over, the student took him upstairs, and he couldn’t believe how proud the guy was working in somebody else's house. This anecdote and other personal experiences motivated him to write his magnificent piece.
The Oscar® hopeful director admits with a good sense of humor. He is not a “control freak” but likes to control everything. During the pre-production, he did the entire storyboard himself, and it was a big help for this linear story.

Like many South Korean wealthy families, the Park’s house has a bunker in its basement in case of an atomic attack by the North Korean leader “Little Rocket Man,” Kim Jong-un. By the way, the jokes about the North Commander are part of the hilarious political satire.

The art department work is monumental; they built the interiors and some of the streets inside of the studio. That includes the well-controlled epic rain flooding. The whole shooting took seventy-four days, three times more than an average film schedule of twenty-four days.

After a screening in West-Los Angeles, during the Q&A, the director spoke about his film candidly. He said: "In most cases, microaggression towards the dignity of the underprivileged damages our society." He continued: "When we watch the news, media and audience won’t dig a little bit more into the case - what are the motives, the necessities, or genuine intentions of people implicated."
At that time, I asked Mr. Joon-Ho to describe the genre of his extraordinary piece. Adding that when he writes a script, he is never aware of a specific style because he let the story take the direction itself without boxing it in one particular category. Everyone can classify his film accordingly to their perception.

Bong Joon-Ho worked with the same actors in his previous films. They know each other for a while and feel more comfortable for actors to give a perfectionist director an authentic performance.
The performances in “Parasite” are exquisite and natural. The entire cast shines on the screen for long-lasting delight.


“Parasite” is an intimate film, not necessarily a movie with special effects. For that reason, Bong Joon-ho achieved the same Dolby Atmos sound quality of Alfonso Cuarón’s Oscar® winner, “Roma,” emphasizing on the difference of classes – noisy for the poor, quiet for the rich.

Funny but true, Kim’s mother quotes: “It's such a luxury to be kind. If I were rich, I would be kind.” The director says it's not morally correct, but it's straight forward.
In society, the essence of family is to stay together. In"Parasite," the punishment is to end up scattered away. The audience cannot hate the Kim family because they have their charm. The spectators rule for the poor, making the Kims a very likable antihero.

The morality of the film doesn't justify the act of killing and is open to interpretation. Just remember, none of the characters are criminals; circumstances bring them together – but the calamity reaches all.

Some people may see “Parasite” as socialist propaganda, I see it as a masterwork that reproduces reality in a very divided society.
Parasite (Official Trailer)
Related Articles:
The Academy Museum of Motion Pictures Opens at Last
MAKEUP & HAIRSTYLING - OSCAR WEEK 2020
THE WORLD'S BEST FILM FESTIVAL POSTERS 2020
TWENTY BEST MOVIES OF 2020
THE BEST FILM FESTIVAL POSTERS OF 2019
“Les Misérables” Boyz n the French Hood
The Painted Bird: In the Dawn of the Holocaust
“Pain and Glory” Almodóvar's Blast from The Past
“Honeyland” The Last Beekeeper of Macedonia
Invisible Life: Melodrama is Not Dead in Brazilian Cinema
“The Cave” An Underground “Elysium” for Children in Syria
“The Biggest Little Farm” Transforms Land Into “Farmville”
“Synonyms” A Good Jew in Paris
“Shoplifters” The Universal Language of Stealing
“The Art of Self-Defense” – Can Karate Cure Loneliness?
“Endless Poetry” The Atypical Universe of Alejandro Jodorowsky