Quo Vadis, Aida? The Perfect Depiction of The Genocide at The Balkans 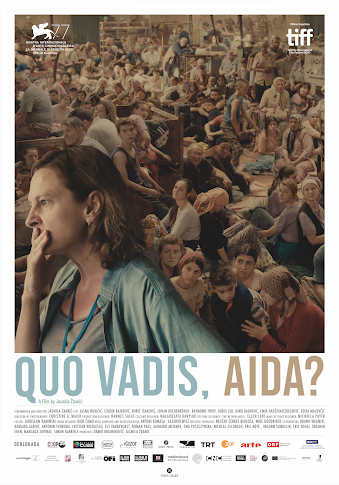 “Quo Vadis, Aida?” is a monumental work of art, operatic and poignant.

Based on actual events, the Oscar-nominated film from Bosnia and Herzegovina raises awareness of people’s struggle in the Balkan War during the 1990s.

The historical drama follows a crucial moment in the life of Aida Selmanagic (Jasna Djuricic), a United Nations translator who sees herself in the middle of an international conflict. The interpreter’s job allows her to gather the information that will change the destiny of thousands. As she helps everyone inside the refugee camp, she will do the impossible to save her husband and two young sons in the bargain. However, the ethnic cleansing in Srebrenica orchestrated by General Ratko Mladić is still one of the most horrendous crimes against humanity at the end of the 20th Century.

The performance of Jasna Djuricic is impeccable. Her facial expressions transmit the proper emotions in every single scene she plays. 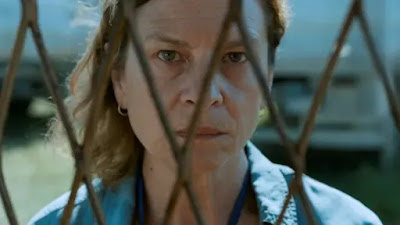 The Serbian invasion of Bosnia took place in 1995 with serious repercussions hard to assimilate for the rest of the nations, who were unaware of the chaos suffered by the people in the newly divided Yugoslavia due to religious and political differences. 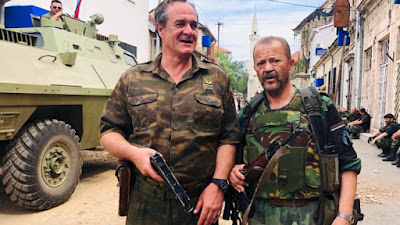 General Ratko Mladić (Boris Isakovic) documented his war crimes with a camera person recording every step he gave, including the tragic genocide perpetrated by his officers. Moreover, the material validated his criminal actions in an effective system of political propaganda during those chaotic times in the Balkans peninsula. 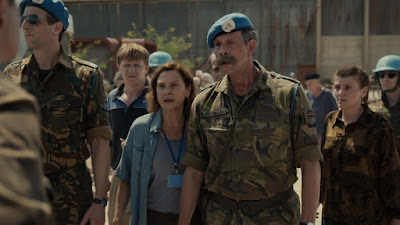 The General made a historic pact that looked more like a “one-sided ultimatum” between his army and the United Nations Blue Helmets. Aida witnesses the event and feels that the General will take extreme actions against innocent locals in the restricted areas protected by the United Nations peace forces.

Writer-director Jasmila Zbanic remembers how the Serbian army penetrated the UN-protected areas mercilessly. The Blue Helmets forces could not protect the civilians, and mass killings and mass graves are still unveiled. She compares the Bosnian experience to the horror lived during WWII.

Zbanic based part of her story on the book “Under the UN Flag” by Hasan Nuhanovic, who recounted the story of a male translator during the conflict. She adapted the film by having an influential female figure leading the action and connecting the dots. Researching for more evidence, Jasmila Zbanic found that genocide is still denied by many, including the European Union.

At a virtual screening sponsored by the Museum of Tolerance in Los Angeles, Jasmila Zbanic passionately expressed that her main character is not an ordinary hero because “In the attempt to save her family, Aida loses her humanity, making her life more variable.” With her movie, Jasmila hopes to start opening the conversation about the importance of finding the truth about the genocide in her homeland - as a form of people’s liberation.

The production crew went to a refugee camp during the Bosnian War (1992-1995) and hired more than 500 extras from different countries. Some of them were real survivors who were able to tell their stories. For the director, it was imperative to listen to the people’s first-hand experiences and set the account right. 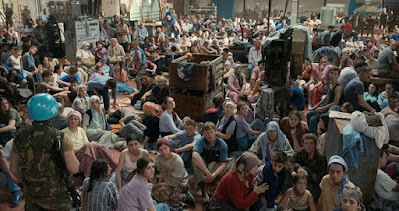 To recreate some of the most dramatic scenes, Jasmila Zbanic was inspired by “Schindler’s List.” She used some SFX effects flawlessly - always keeping in mind the audience’s perception to communicate the facts about one of the most tragic episodes in Bosnia and Herzegovina’s history.

Jasmila Zbanic started her career as a documentarian. She looked for hours of video footage, transcripts, and other propaganda campaigns to accurately recreate the actors’ appearances, mannerisms, and dialogues. She learned how to place her real-world findings in all her projects, but in “Quo Vadis, Aida?” she was open to dramatization.

Since its premiere at the Venice Film Festival 2020, “Quo Vadis, Aida?” was screened in many film festivals and in a local theater where some filmgoers had the opportunity to appreciate a movie that tells their story straight on the big screen. The film also streamed online in their country and reached a broader audience, for the director was a personal way to fight censorship.

She ran an extensive Awards campaign that earned her an Oscar nomination in the Best International Feature Film category. After winning fourteen international awards, the movie got distribution in the United States, now streaming on Hulu.

“Quo Vadis, Aida?” is not a film about revenge. Its true intention is to bring evil people to justice and have the European Union and the entire world recognize that the Srebrenica genocide actually happened.

Aida is a fighter who sees the light at the end of the tunnel - our generation’s responsibility is to learn from the past and prevent atrocities like the genocide at Srebrenica from ever happening again for a better and brighter future.