Tempestad; is Mexico’s Selection for the 90th Academy Awards 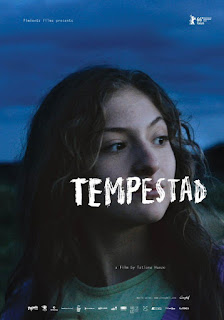 The award-winning documentary “Tempestad” has been chosen the official Mexican submission to the Oscars© for Best Foreign Language Film, 2018.
The film directed by talented Salvadorian filmmaker Tatiana Huezo won the Ariel (the Mexican equivalent to the Oscar©) for Best Director, Best Documentary, Best Sound, and was nominated for Best Picture, 2017.

Tatania has been working in Mexico for quite some time. Her reputation as a visionary director has grown notability after her remarkable directorial debut in 2011 with the documentary “The Tiniest Place/El lugar mas pequeño.” In there, Huezo, beautifully detailed the footprints of survivors of El Salvador's civil war in the 1980's.

The Mexican Academy of Arts and Cinematographic Sciences made the announcement of its selection Wednesday morning, detailing that an individual committee composed of 123 voting members viewed 15 pre-selected works choosing "Tempestad."

The other 14 films include this year’s Cannes Un Certain Regard Jury Prize Michel Franco’s “April’s Daughters,” and last year’s Best Director at the Venice Film Festival Amat Escalante for his sexual-extraterrestrial-drama “The Untamed/La región salvaje.”

Other remarkable films on the list were “Nocturno” by Luis Ayhllon which was an official selection of the LA Film Festival, and the beautiful “Moonlight” like nostalgic production “I Dream in Another Language” screened at OUTFEST 2017.

2016 was a prosperous year for Mexican films, including the extensive line-up of outstanding documentaries such as the nostalgic box-office smash “Beauties of the Night/Bellas de Noche.”

Also, “All Of Me/Llevate mis amores,” a marvelous human portrait of women helping the migrants from Central-America with food and first aid, who traveled through Mexico on top of the train named “The Beast/La bestia” on their way to the United States.

Another high-quality documentary was the one about a journalist photographing the chaos in the streets of Mexico, “The Man Who Saw Too Much.”

Finally, the beautifully shot “Plaza de la Soledad” by Maya Goded was also a good candidate.
“Tempestad” is a heart-wrenching documentary that reflects the reality of the human trafficking in a country plagued by the infamous “war on drugs.” The film follows two unrelated storylines of women who are suffering the abuse of an endemic system where prostitution, corruption, bureaucracy, and drug dealing damage their lives.

The film submitted by Mexico has not been the only documentary on the competition. Last year, Italy presented “Fire at Sea” landing a nomination in a different category, Best Documentary Feature. In 2011, the German submission “Pina” by Wim Wenders had the same luck.

Every year, many countries submit documentaries to the Foreign Language Film category, hoping to get a nomination -- if they don’t, at least they have their voices heard in America. Perhaps the Academy will consider a new category: “The Foreign Language Documentary Feature.”
“Tempestad” can qualify in other categories including Best Documentary Feature by getting one week of theatrical release in L.A. and N.Y.

In the past, three Mexican documentaries have been nominated for an Oscar© for Best Documentary Feature, “Torero!” by Carlos Velo, 1956. “The Olympics in Mexico” directed by Alberto Isaac, 1969. And “Promises,” directed by Carlos Bolado, a documentary about the lives of seven children during the Israeli-Palestinian conflict in 2001.

In the Foreign Language Film category, Mexico has been nominated eight times and never won.

Alfonso Cuarón's “Roma” could be Mexico's next best thing for next year.

“Tempestad” has been released in Germany as “Sturmisches Land” and in France as “Tempte.” The French TV called it “Un pays dans la tourmente.”

Finally, to send "Tempestad" to the Oscars© represents an enormous opportunity for a documentary to draw everybody's attention to the terrible condition of human trafficking, not only in Mexico but around the world.
"Tempestad" trailer
Follow us on Twitter
Like us on Facebook

Related Articles:
“A Fantastic Woman” Love, Grief, and Compassion in Santiago
“In the Fade” “Revanche” in Hamburg
“The Square” An “Exit Through the Gift Shop”
Hashtag #OscarsSoFabulous
SEVEN GREAT FOREIGN FILMS SHOWCASED AT AFI FEST 2017

Polina: From the Classic Russian Ballet to the World of Contemporary Dance

Inspiring and beautiful, “Polina” or in French “Polina, danser sa vie” recites the incredible journey of a young Russian ballerina with big dreams and great expectations. 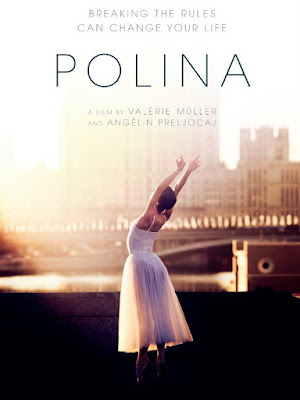 Based on the graphic novel by Bastein Vivés, “Polina” opens with an unforgettable and recurrent image of a seven-year-old girl performing in the woods.
Polina grows as a beautiful teenager. With discipline and talent, she continues her development as a ballerina in a prestigious Academy in Moscow.
At the Academy, Professor Bojinski's military methods make Polina’s life more stressful. The tutor challenges his pupils with pain and strict discipline. “A real artist always longs for perfection,” he says.

The Bolshoi Ballet is one of the most significant contributions to the Russian culture, a national symbol of pride. Every year, many young aspiring Russian dancers compete to be part of it. The Bolshoi is the ultimate goal. Polina is not the exception. She, as well, will do the impossible to be part of the most prestigious dance company in the world.
In life, love always plays a tricky game -- Polina falls for Adrien played by Niels Schneider (“Heartbeats,” “I Killed My Mother”), a charming French dancer who introduces her to the world of contemporary dance.

In France, Polina lands in the hands of a famous modern-dance guru named Liria Elsaj, played by the Oscar winner Juliette Binoche (“The English Patient”).

Binoche is a chameleon of an actor who in every film transforms herself into an extraordinary character with perfection.

Liria is a professional coach, as she demands of her talented dancers to tap into the best of their interiors if they want to continue pursuing their dreams.

She firmly believes, “When you dance, it is important to feel the absence of someone you love.”

She continues, “An artist is someone who observes, looks around, and masters his technique. A real artist is always looking for perfection. You have to learn your craft and be ready for your big moment.”

Out in the streets, Polina bounces with the underground dancers of Paris, the unprivileged, marginalized immigrants who like to dance contemporary music in the free spaces, plazas, and alleys. She is consumed with amazement to see the dancers moving with the freedom she never had.

Jérémie Bélingard is a real-life star of Paris National Opera. He plays a motivator who helps troubled kids to be better through modern dance with striking techniques.
Bélingard’s presence is sublime. The interaction he has with Polina creates a turning point in the story and real meaning in Polina's life.

For the role of Polina, directors Angelin Preljocaj and Valérie Müller-Preljocaj auditioned 700 dancers before they discovered Anastasia Shevtsova at the Mariinsky Theater in Saint Petersburg. 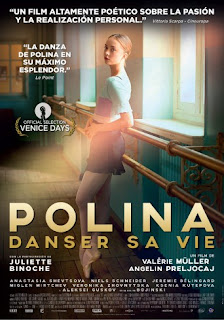 Anastasia Shevtsova is a real virtuoso. Her breakthrough performance in "Polina" is extraordinary - she has exceptional acting abilities and professional dancing skills, all in one.

"Polina" graces some of the most stunning locations from Russia to France, and Belgium. The gorgeous cinematography is by George Lechaptois. He displays Polina’s world with elegance and beauty.

The original music score is by 79D. "Polina's" musical evolution goes from the classics to the contemporary sounds of modern dance seamlessly.

“Polina” is enjoyable, original, and breaks from conventions, although the editing could be more timely, with smoother transitions to give a sense of modernity to the entire film.

Polina’s final conflict is within herself -- she has to make important decisions about her life. Will she play a character in “The Nutcracker,” perhaps in “Snow White,” or will she merely perform herself in contemporary ballet?

Remember, the best role of your life is the one where you can be yourself.
"Polina" trailer
Related Articles:

Related articles:
“A Fantastic Woman” Love, Grief, and Compassion in Santiago
“In the Fade” “Revanche” in Hamburg
“The Square” An “Exit Through the Gift Shop”
SEVEN GREAT FOREIGN FILMS SHOWCASED AT AFI FEST 2017

“DANCER” THE UKRAINIAN BILLY ELLIOT OF ‘TAKE ME TO CHURCH’