Invisible Life: Melodrama is Not Dead In Brazilian Cinema 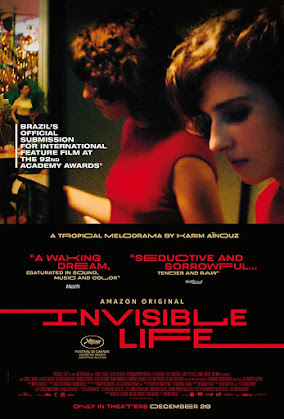 “Invisible Life” is a nostalgic, affectionate, and well-crafted masterpiece.

The Brazilian/German co-production is a profound and artistic adaptation of Martha Batalha’s novel “A Vida Invisível de Eurídice Gusmăo,” depicting the lives of two sisters growing up in Brazil and their tortuous separation by their conservative parents in the 1950s - Eurídice (Carol Duarte), the extraordinary pianist/aspiring soloist; Guida (Julia Stocker), yearning to be a devoted housewife.
A series of unfortunate events will determine the fate of the Gusmăo sisters. The pre-established authoritarian male structure of that time caused heir dearly separation.
Life sets them apart but their hearts remained together by the illusion of writing to each other. Those undelivered letters uphold the melodrama tight till the end as a thread of a very well structured film.

Furthermore, in the story, the parents forced Euricide to marry a man who doesn't care for her vocation. Eurídice's strain continues rehearsing and improving herself for the long-awaited audition.

Guida returns to her parents' house with her broken dreams and an advanced pregnancy, forcing her to live out in the streets.

At that time, women couldn't aspire for higher education or better-paying jobs in their society. Sexism suppressed many women's dreams, goals, and desires.

The sisters' experience can compare to our mothers and grandmothers lives who didn't have the opportunities they deserved. They could be someone famous if they only were allowed to fulfill their dreams.

"Invisible Life" is a well-told family melodrama with social and political substance, transcending to our days in defense of the women’s emancipation, if we can read between the lines.
Director Karim Aïnouz (“Madame Satã,” “Futuro Beach”) took a risky decision to adapt the novel to the big screen with delicacy and mastery.

Born in Fortaleza, Brazil, Aïnouz was inspired partly by the courage and the spirit of his single mother's survival.

After a private screening in Hollywood, Aïnouz was questioned by viewers about altering the novel’s ending. He said, adapting the conclusion of the book to the screen took him more than a year. In the film, the end rightfully complements the entire story, making it more poetic and cinematic. The writer's team includes Murilo Houser and Inés Botargaray in the credits.
In charge of the lavishing look of the film is cinematographer Hélène Louvart. The talented D.P. worked in other relevant movies around the globe such as “Happy as Lazzaro” in Italy, “Maya” in France and India; “Petra” in Spain, “Dark Night” in Florida, “Beach Rats” in New York, and now “Invisible Life” in Brazil.

With a plethora of colors and elaborate set compositions, “Invisible Life” is a tropical allegory full of liveliness, heartening emotions, and plenty of nostalgia. A story about women with broken wings longing for the lives they could have.

The film's editing elongates the flow of the story and can be confusing if we don't follow the family tree-line carefully. Still, the project is enjoyable, regardless of other criticism and respectable points of views.

“Invisible Life” can be compared with other compelling and classic melodramas such as the Best Picture winner “Rebecca” by Alfred Hitchcock, “Imitation of Life” by Douglas Sirk, “Like Water for Chocolate” by Alfonso Arau, and “All About My Mother” by Pedro Almodóvar.
“Invisible Life” inspires women to continue breaking barriers and closing the gender gap, optimistically speaking.

The Brazilian melodrama won Un Certain Regard in Cannes 2019, the CineCoPro Award at the Munich Film Festival, and nominated for an Independent Spirit Award.

The timing of these engaging melodrama couldn't be any better as we see today’s women pushing barriers that limited previous generations to accomplished their goals and reached out for more opportunities, leaving behind the oppressive world remarkably and exquisitely depicted in “Invisible Life.”
Invisible Life - Official Trailer


Related Articles:
Clara Sola: Defines Feminism and Magical Realism in Costa Rica
Olga: The Ukrainian Gymnast Embodies Switzerland at the Oscars
Undine: Dangerous Liaisons in Berlin
Two of Us: Juliette & Juliette of Montpellier
The Painted Bird: In the Dawn of the Holocaust
And Then We Danced: Folk, Love & Pride in Georgia
Adam: Women’s Resilience in Morocco
“Les Misérables” Boyz n the French Hood
“Papicha” Girls Want to Have Fun and Freedom in Algeria
“Parasite” Accomplishes the South Korean Dream
“Pain and Glory” Almodóvar's Blast from The Past
“Honeyland” The Last Beekeeper of Macedonia
“Synonyms” A Good Jew in Paris
“The Cave” An Underground “Elysium” for Children in Syria
NINETEEN BEST FILMS OF 2019 - FESTIVAL IN LA
THE BEST FILM FESTIVAL POSTERS OF 2019
IF YOU ARE READING FROM A MOBILE DEVICE, CLICK: view web version FOR OTHER COOL FEATURES SUCH AS TRANSLATE POWERED BY GOOGLE, AN INTERACTIVE FILM FESTIVAL CALENDAR, AND MORE.
Festival in LA ©2019
Posted by Festival in LA at Tuesday, December 31, 2019