The Biggest Little Farm: Transforms Land Into a “Farmville” Reality 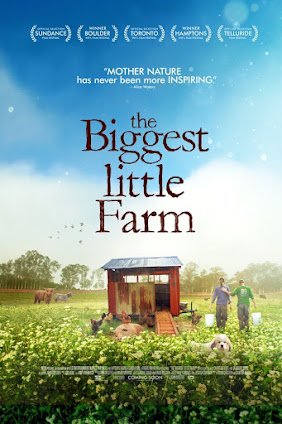 “The Biggest Little Farm” is a captivating, environmentally inspiring, and organically stimulating documentary about all the excitement of running a farm successfully in California. A total winner!


Facing eviction from their tiny urban apartment in Santa Monica, California, John and Molly Chester needed to find a new place to live in, something with a backyard where their new dog Todd can bark as much as he wants.
The California couple never imagined that their steadily growing family soon would find the land of their dreams in the thriving community of Moorpark - a citrus-growing area located one-hour northwest Los Angeles in Ventura County.

Years back, John lived on his uncle’s farm, where he was taught to respect the land. At that time, he didn’t see things the way he sees now.
They dove into this new lifestyle headfirst and started researching sustainable farming on-line.

The Chesters found everything they needed on the internet: from investors to volunteers and even livestock! The outline has a similar strategy to the game we played on Facebook, Farmville, but at this time, it is real.

When they met Alan York, the expert in soil and ecosystems, they knew they found a counselor and mentor. His approach had a colorful philosophy. On their advantage, York was less scientific and more pragmatic.

In 2009, John had no time to waste. His background in photography and knowledge in farming inspired him to tell his personal story about nature and cycles of life.

John began filming their journey focusing on how the seasons of the year changed and modified the environment repeatedly year after year. He used that information as a fundamental guide to working with his crew periodically.

John placed the footage together with the help of some interns. It was when he was able to finish this fun-to-watch documentary.

The cinematography is by John Chester himself, and it has the quality of any National Geographic project.

“The Biggest Little Farm” features stunning imagery combined with an accessible and fun narration that makes watching this film a joy.

After a screening in Beverly Hills, we had a very insightful Q&A with John Chester, where he reflected, “Nature doesn’t work right or wrong, only works with consequences. The complexity becomes a vibrant experience. The most crucial task is to diversify the soil, adding natural nutrients, because the conditions of the land ties with everything else." “Farming is the most interesting video game you can ever imagine to play.”
On their particular farm, every animal is a character. They have a name and an essential job, like Emma, the pig, who never stop birthing piglets. Her best friend was Greasy, the rooster, and Todd, the inspirational dog.

To transform every adversity into an opportunity, the new farmers relied on the power of observation and discovered that even predators become pollinators to keep the balance in life.

On a farm, living and dead walk side by side, and death is only a facet of life. One of their most challenging tasks was to euthanize an animal, but remember that life recycles itself: dead means nothing to the ecosystem, only a new beginning for another being to subsist.

John Chester added: “An embarrassing situation cripples the possibility to find an explanation. When something goes bad, do not freak out; a problem is a chance to find a solution.”

The marvelous documentary teaches us to treasure that "observation is our superpower." 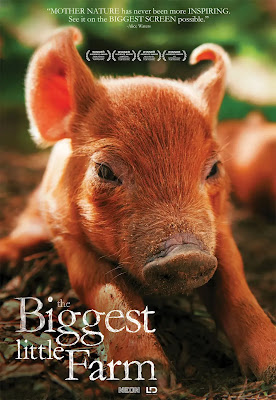 After the screening, the director commented that at the Berlin film festival, people said: “We didn't know Americans can be so ecosystem friendly.” A big oops from the political agenda of the present administration.
Audiences around the world help the pleasing documentary to earn accolades, mostly in film festivals such as Sundance, and the AFI FEST. But the narrative missed essential pieces of information - financial standings, earnings and losses, and some relevant economic data, for other people who, after watching the documentary feel motivated to venture and follow the filmmakers/entrepreneurs lead in farming.

In the film, the lack of "money matters" and some other specific facts to make this farm sustainable compensates with natural humor and tenderness and charm.

Though we followed Chesters's experiences carefully, we couldn't stop thinking about the lives of the vast army of people we don't see on the screen but who help to make the film. It will be equally enlightening to see the volunteers, interns, and farmworkers who keep the piece of the land alive.
“The Biggest Little Farm” creates a profound impact on the viewer for its honesty and accessibility. Mostly about the significant challenges we are facing now due to Climate Change and Global Warming.

Thumbs up for the Chester family, and for their extraordinary ability to reconstruct and maintain the land where nature and humans can coexist harmoniously.
The Biggest Little Farm trailer

The Biggest Little Farm offers educational tours, for more information visit:
The Biggest Little Farm Educational Program
Related Articles:
The Academy Museum of Motion Pictures Opens at Last
Under the Volcano: The Golden Era of a Recording Studio in the Caribbean
NINETEEN BEST FILMS OF 2019 - FESTIVAL IN LA
THE BEST FILM FESTIVAL POSTERS OF 2019
“ZOO” SAVING PRIVATE ELEPHANT
“The Cave” An Underground “Elysium” for Children in Syria
“Honeyland” The Last Beekeeper of Macedonia
“The Art of Self-Defense” – Can Karate Cure Loneliness?
“Shoplifters” The Universal Language of Stealing
“Ben is Back” So is Julia Roberts
“A Son of Man” Ecuador Center of “The New World”
“My Life as a Zucchini” The Animated Life of a Swiss Boy
“Barry” And “The Wonder Years” Of Barack Obama
“Hunt for the Wilderpeople” Is the Funniest Manhunt Movie Ever
“KICKS” KIDS OF COLOR ROAMING IN SUBURBIA
The Painted Bird: In the Dawn of the Holocaust

IF YOU ARE READING FROM A MOBILE DEVICE, CLICK: view web version FOR OTHER COOL FEATURES SUCH AS TRANSLATE POWERED BY GOOGLE, AN INTERACTIVE FILM FESTIVAL CALENDAR, AND MORE.
Festival in LA ©2019
Posted by Festival in LA at Monday, April 29, 2019