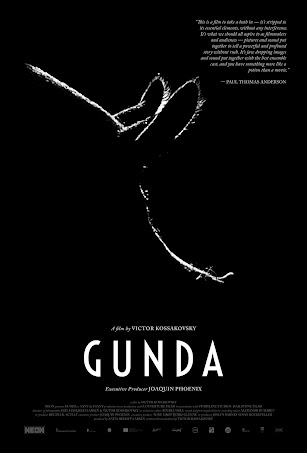 “Gunda” is a fascinating and minimalist depiction of the tranquil life in a farmhouse, where pigs, chickens, and cows take center stage. “Gunda” is one of the best documentaries of the year!

In “Gunda,” he takes us into an observational passage with stunning cinematography, perfect use of a non-intrusive camera, and crystal-clear sound. The film is captivating audiences and has awards – at the Berlin and Stockholm film festivals – nominated for Best Documentary at the European Film Awards and an IDA Award. Many may find the pace gridlocked yet compelling and thought-provoking.

The documentary creates awareness about how domestic animals show emotions through behavior – as we see mamma pig caring for her piglets, caged chickens experience freedom for the first time, and cows run without restrictions on the fields.

The film opens with a steady shot of the exterior of a barn. Inside, a mother pig is giving birth to about a dozen piglets. It is a miracle of life. As every little pig comes to the exterior, we fall in love with them. They are adorable! – it is also what the protective mother pig thinks. The day passes, and the entire pack goes out for a stroll to discover the delights of the dirt in their vast universe.

When a flock of caged chickens slowly and cautiously moves out, the physical damage suffered for an entire life in captivity is noticeable. One chicken is without a leg, and others miss a substantial number of feathers, all disoriented.

The fascinating trend continues with a gorgeous display of big and healthy cows interacting and running freely in the open. Those images make us think about all sorts of things, such as how valuable life is for everybody in the field, even those domestic creatures we cage, kill, and consume in our daily diet.

When Kosakovskiy decided to make a black & white silent film, he wanted the audience to experience, in first-person, a glimpse of life on a farm. He knew he needed to spend months with the best equipment possible – the best camera and sound, no music sugar-coating, but plenty of inspiring images of nature.

For years, Kosakovskiy needed help to raise the budget to make this film and pitching a black & white trinity movie with pigs, chickens, and cows as the main stars were hard. To convince producers to invest in his project, he referred to other similar successful films like “Ida,” “Cold War,” and “Roma.” Now, he is glad the producers could see his vision and the intention to shoot a naturalistic film.

To captivate the animals’ actions and reactions, the small camera crew worked tirelesfrom nooning until sunset. Those long-working hours meant nothing compared with the precious moments they got enriching the story dramatically.

Kosakovskiy’s experience working in cinema made him make the right decisions, using long lenses not to distract the animals. For that, he needed the best steady cam operator to keep the proper distance between the camera and the subject, avoid being invasive with the animals, or alter the natural outcome. To photograph the living beings from far was not an esthetic choice but a moral one.

In a movie set, the director is always in control of every given situation. In this documentary, the director had to be patient and not dictate something he couldn’t control, such as animal behavior, weather, and human challenges. To make “Gunda,” the filmmakers traveled to animal sanctuaries in Norway, Spain, and the United Kingdom.

Kosakovskiy said after a drive-in screening at the Hollywood Legion Theater, “Making this movie changed the way I see life.” The whole intention was to show life on a farm without saying anything and understand what a mother pig feels; seriousness, sadness, and hopelessness.

He continued the conversation. “All those creatures have a soul, and discovering those emotions is moving. The pig compellingly talked to us. In the very last scene, the pig’s behavior looks scripted. It was a miracle; the team cried.”

After admiring such a marvelous work of art, I decided to take “Lechón Asado” out of my Cuban diet, and I am not Cuban, and I am just a simple lover of the world’s cuisine. I am also becoming more appreciative of my Mesoamerican culture based on vegetables and insects.

DANCER” THE UKRAINIAN BILLY ELLIOT OF ‘TAKE ME TO CHURCH

Under the Volcano: The Golden Era of a Recording Studio in the Caribbean
Drunken Birds: Paradox and Poetry in a Canadian Drama About Immigration
Quo Vadis, Aida? The Perfect Depiction of a Genocide in The Balkans
“ZOO” SAVING PRIVATE ELEPHANT
“Hunt for the Wilderpeople” Is the Funniest Manhunt Movie Ever
“Jurassic World: The Fallen Kingdom” “Honey I Blew Up the Dino.”
“Barry” And “The Wonder Years” Of Barack Obama
And Then We Danced: Folk, Love & Pride in Georgia
The Painted Bird: In the Dawn of the Holocaust
“Papicha” Girls Just Want to Have Fun and Freedom in Algeria
‘Cyrano, My Love’ A Fine French Comedy of Love and Errors

“Parasite” Accomplishes the South Korea Dream
Two of Us: Juliette & Juliette of Montpellier
Tove: Bounded by Art, Love, and The “Moomins”
The Mole Agent: No “Mission Impossible” for a 90-Year-Old Chilean Private Detective

IF YOU ARE READING FROM A MOBILE DEVICE, CLICK: view web version FOR OTHER COOL FEATURES SUCH AS TRANSLATE POWERED BY GOOGLE, AN INTERACTIVE FILM FESTIVAL CALENDAR, AND MORE.
Festival in LA ©2020
Posted by Festival in LA at Tuesday, December 15, 2020 No comments: