The Painted Bird: In the Dawn of the Holocaust 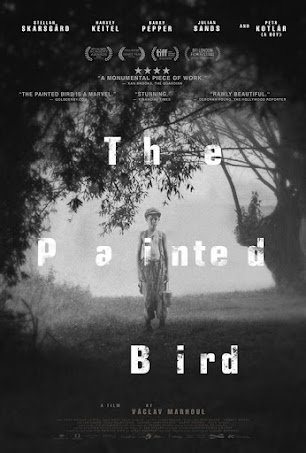 “The Painted Bird” is a monumental achievement, a remarkable cinematic experience - an epic journey of hope and despair. It is one of the best movies about the Holocaust ever made. It is just marvelous!

"The Painted Bird" is a war-survival movie that recapitulates the brutality perpetrated against an innocent soul in the middle of the grim and obscure devastation at the dawn of WWII.

“The Painted Bird” took audiences in festivals around the world by surprise. Spectators who stayed in the theater valued its stunning and pristine 35mm black-and-white cinematography, its poetic narrative, and exquisite portrait of the early life of a vulnerable Jewish boy wandering across the hazardous trenches of international conflict.

The sharp images of child abuse, mutilation, rape, and human cruelty forced attendants to walked out in festivals at the Venice, Toronto, and Chicago film festivals. None the less, this work-of-art was recognized with other prestigious awards such as the Czech Lion for Best Picture and the UNICEF Award at the Venice Film Festival.

Set in several rustic Eastern European locations, the unbearable three-hours-long Czech production is divided in nine suffocating chapters. Each passage is named after every adult who crosses the tortuous path of this nameless six-year-old boy – Marta, Olga, Labina, Mitka, Miller, Priest & Garbos, and others. These troublesome and unruly peasants serve as custodians of the poor boy’s faith.

The boy’s journey starts with a powerful opening - a bullying scene where the villagers’ children burn his pet alive. When his Jewish father was escaping from the Germans, the family spread out - leaving the boy to the custody of a blind older woman. The sudden death of the matron is a prelude of the poor boy's martyrdom.

In the boy's odyssey, every stop is a challenging experience of oppression, abuse, extreme physical pain, domestic violence, and sexual assault.

To be able to survive in a cruel world, the boy's prodigious mind develops the power of observation. His resilience centers in his ability to remain silent, as a mere beholder of his own life.

The film was cleverly shot in chronological order in the course of two years. This heroic love poem permits spectators to witness the boy's natural growth, maturity, and evolution during his treacherous path.

“The Painted Bird's” universality dwells in its honest perception of religion that connects to all beliefs - including Judaism, Catholicism, Protestantism, and Atheism. In the film, religion is in proportion to the presence of Fascism from Nazi Germany and to the Soviet Communism from the former USSR. Those political ideologies gambled with the lives of millions in the central part of Europe during the war.

The language spoken in the movie is called 'Interslavic' or 'Interslavic Esperanto.' An international language articulated in several Eastern European Countries. We can hear Polish, German, and Russian as well.

Written by best-selling, prize-winner author, Jerzy Kosinski, the book is published in the United States in 1965. The polemic resides in the subject matter of the story that leaves in the readers' mind a ghastly, everlasting impression of discomfort.

Initially, the writer wanted the most famous international film directors of that time, such as Federico Fellini or Luis Buñuel to direct the adaptation of his literary work to the big screen, but the project never materialized.

It was only after the passing of Kosinski of apparent suicide, at the age of fifty-seven, when the Czech director Václav Marhoul went to a secluded Jewish community in Chicago to secure the rights of the novel, which is considered as a major literary work about the Holocaust in proportion to Anne Frank: "The Diary of a Young Girl."

Written in Manhattan, Kosinski set his personal story in Poland. Due to the controversial text, the northern European country didn't want to be associated with the project. The director set the child's journey south of the Polish border, without specifying a country, language, or even the name or last name of the boy.

Viewers can balance this poignant production with other classic Holocaust movies such as “The Sound of Music,” “Schindler's List,” “A Bag Full of Marbles,” or the parody “Jojo Rabbit.” But “The Painted Bird” is a hyper-realistic, dissenting, and straightforward version of life at the end of the 1930s in rural Europe - where ignorance, superstition, and poverty prevailed.

In this story, nothing is intentional; everything is circumstantial. Metaphorically speaking, “The Painted Bird” title comes from a scene where a bird breeder paints the bird's feathers and sends him free. Upon the bird’s return, he is picked to death by his flock. In the movie, the kid is that bird. The paint becomes his stoic instinct for survival. Adults represent his flock, who will do anything to break his spirit apart.

Instead of looking at the series of disgusting images of the film, viewers should see the movie as a relevant document that demonstrates how low humanity can go under extreme circumstances.

For grown-up men and women suffering the calamities of war, they were able to see the boy as an adult and maybe as one of their own. They were protective and at the same time, predatory. Humans tend to hurt what they love most and corrupt the innocence with profane intentions and lower instincts. It is human nature.

Marhoul confessed to me at a small gathering in Hollywood that his ambitious project took him ten years to make, including one full year to get the author's rights. He hopes that his movie would remain in the minds and hearts of the spectators for quite some time. And I think it will, because this film is remarkable. The filmmaker's style is rigorously academic and his honesty impeccable - comparable to Agnieszka Holland's heartrending Holocaust film “Europe Europe.”

Symbolically, Catholics can see the boy's passage as a foray through the Seven Deadly Sins (Pride, Envy, Gluttony, Lust, Anger, Greed, and Sloth). The verse “An eye for an eye, and a tooth for a tooth,” can be found easily in any chapter. The film's complexity depicts the innocent life of a boy, the cruelty of his surroundings, and historical events with accuracy.

“The Painted Bird” is a film I could never forget for its originality and breathtaking images of agony and hope.

“The Painted Bird” is one of the best films of the year. For that reason, the Czech Republic selected this magnificent production as its entry for Best International Feature Film at the Oscars. Later, this drama was chosen by the Academy as one of the top ten semifinalists.

This magnificent film vividly exposes the calamities of warfare, the deviousness of human behaviors, and the physical and psychological damage we can cause in children under those extreme circumstances. “The Painted Bird” is a work of art about the Holocaust - an extraordinary achievement in contemporary cinema.

The Painted Bird - Official Trailer
Related Articles:
Olga: The Ukrainian Gymnast Embodies Switzerland at the Oscars
Under the Volcano: The Golden Era of a Recording Studio in the Caribbean
Two of Us: Juliette & Juliette of Montpellier
Quo Vadis, Aida? The Perfect Depiction of a Genocide at The Balkans
And Then We Danced: Folk, Love & Pride in Georgia
Invisible Life; Melodrama is Not Dead in Brazilian Cinema
“Les Misérables” Boyz n the French Hood
“Synonyms” A Good Jew in Paris
“Papicha” Girls Just Want to Have Fun and Freedom in Algeria
“Parasite” Accomplishes the South Korean Dream
“Pain and Glory” Almodóvar's Blast from The Past
“The Cave” An Underground “Elysium” for Children in Syria
“Honeyland” The Last Beekeeper of Macedonia
‘Cyrano, My Love’ A Fine French Comedy of Love and Errors
THE BEST FILM FESTIVAL POSTERS OF 2019
IF YOU ARE READING FROM A MOBILE DEVICE, CLICK: view web version FOR OTHER COOL FEATURES SUCH AS TRANSLATE POWERED BY GOOGLE, AN INTERACTIVE FILM FESTIVAL CALENDAR, AND MORE.
Festival in LA ©2020
Posted by Festival in LA at Monday, June 01, 2020