L.A. Comic Con drew thousands of fans the the city's Convention Center, where hundred exhibitors introduced what they had to offer to visitors. Many people worn elaborate and original costumes.

The conferences and autograph signings with many celebrities, writers and content creators also were well-taking care off.

L.A. Comic Con is growing at accelerating pace, we are hoping that the yearly event brings more movies studios and Hollywood premieres to reach the level of San Diego in the near future. 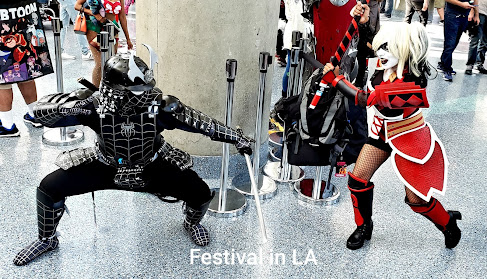 Related Articles:
The Academy Museum of Motion Pictures Opens at Last
THE BEST FILM FESTIVAL POSTERS OF 2019
Guillermo del Toro Launches the Teaser of “Nightmare Alley”
Annette: Swings Between “La La Land” and “Moulin Rouge!” Beautifully
My Hindu Friend; Hector Babenco's Testament to Posterity
Quo Vadis, Aida? The Perfect Depiction of a Genocide at The Balkans
Summer of Soul: The Music Fest that Gave Freedom to Thousands
Undine: Dangerous Liaisons in Berlin
Two of Us: Juliette & Juliette of Montpellier
Parasite: Accomplishes the South Korean Dream
And Then We Danced: Folk, Love & Pride in Georgia
“Synonyms” A Good Jew in Paris
“Roma” Anarchy and Repression in an Epic B&W Mexican Drama
“Birdman or (The Unexpected Virtue of Ignorance)”
THE WORLD'S BEST FILM FESTIVAL POSTERS 2020
TWENTY BEST MOVIES OF 2020
The Best Latina-Theme Movies in America