Cyrano, My Love: A Fine French Comedy of Love and Errors The success of “Shakespeare in Love” inspired young French actor/director Alexis Michalik to write “Cyrano, My Love,/Edmond,” an opulent period piece set at the end of the 1800s.
When Michalik was ready to produce the film, he had no one to back him up.
Before he gave up trying to find the money, he traveled to London - where he saw the play version of the 1998 Best Picture Oscar winner “Shakespeare in Love.” Then, he decided to adapt his film script to the theater. “Cyrano, My Love” becomes one of the biggest hits in French theater history. The play is still running in Paris for more than three years.

Thanks to the success of his comedy in the theater, Michalik was able to direct his first feature.
Unfolding in the world of Parisian theaters in 1897  - “Cyrano, My Love” chronicles the frantic struggle of young playwriter Edmond Rostand to deliver an entire play in verse named, ‘Cyrano de Bergerac.’ The problem was that Edmond only had the title and nothing else. 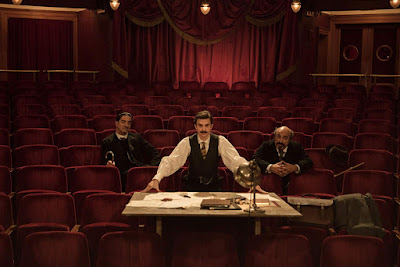 Actor Thomas Solivérés is magnificent, playing Edmond Rostand. His histrionic characteristics have the potential to reach up to the level of the great Buster Keaton. Solivérés' elegant performance connects with the audience rapidly. The young and talented French actor also worked in other transcendental French films such as “The Intouchables,” continuing his ascendant career with “Les gorilles,” “The Tournament,” “Love at First Child,” and “Honey Bunny.”

In the story, Edmond must leave behind his previous flops, jealous wife, and two children and move on to something bigger-than-life to fulfill his destiny. He only needs divine inspiration, a muse, a pal, or an event that could ignite his passion for writing. The luck will be on his side – he will have more of what he bargains for in a series of fun-to-watch trials and errors. 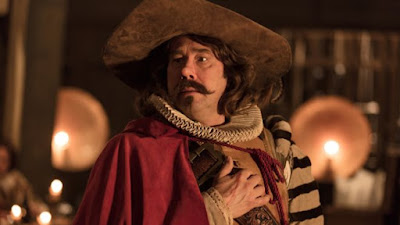 Coquelin challenges Edmond to have the play done as soon as possible. In the mise-en-scene, the ambition of the Corsican producers has no limits. They impose an elderly diva for the female lead.
Everyone’s reputation and prestige are in peril without a script. They also need the theater’s permits, another necessary point to accelerate the pace and to have the promised play ready for the Holidays,

Edmond Rostand was satisfied with the first and second acts in the writing process. Feeling motivated, he continues adding three more to this masterpiece - written in rhyming couplets and Alexandrine verses.

Cyrano de Bergerac is the fascinating story of the tragic hero with a long nose who wants to gain the love of his cousin Roxanne. In literature, to be considered a “Tragic Hero” is a character who must arouse pity from the audience, have a downfall, and possess admirable traits.

Alexis Michalik’s passion for theater started when he was three-year-old. In “Cyrano, My Love,” he mixes accurate historical facts surrounding the life of such a talented writer and actors with some literary liberties that make this piece enjoyable and fun to watch.

For Michalik, the most challenging part of making the film was to adapt the screenplay to the stage because theater has other specifications and arrangements for actors to deliver their lines. He had to place on hold the movie he had in mind due to the lack of interest of the potential producers.

The talented director added. “It was an excellent experience to do the play before the movie because everyone involved in the film saw how the story evolves in the theater.” - Both a considerable successes.
“Cyrano, My Love” was shot entirely in the Czech Republic, said Alexis Michalik in a Q&A after screening his U.S. Premiere during the 2019 COLCOA French Film Festival.

For Michalik, acting and directing his first feature film was easy. Michalik considers himself an excellent auto-critic even though, sometimes, he is too harsh to himself.
“Cyrano, My Love” is a highly gratifying romance to watch.

The farce and the entanglements are funny  - not only for the talented actors who played their parts stunningly but for audiences worldwide who fell under the spell of Cyrano and his pursuit of love.

Three Thousand Years of Longing, George Miller’s Lavish Genie Tale
Mrs. Harris Goes to Paris, The British Cleaning Lady to the Dior House
Two of Us: Juliette & Juliette of Montpellier
THE BEST FILM FESTIVAL POSTERS OF 2019
“Les Misérables” Boyz n the French Hood
“Synonyms” A Good Jew in Paris
“Pain and Glory” Almodóvar’s Blast from The Past
“Invisible Life” Melodrama is Not Dead Thanks to Brazilian Cinema
“The Cave” An Underground “Elysium” for Children in Syria
“The Biggest Little Farm” Transforms Land Into “Farmville”
“Honeyland” The Last Beekeeper of Macedonia
“Shoplifters” The Universal Language of Stealing
“The Art of Self-Defense” – Can Karate Cure Loneliness?
“Endless Poetry” The Atypical Universe of Alejandro Jodorowsky
SEVEN GREAT FOREIGN FILMS SHOWCASED AT AFI FEST 2017
The Academy Museum of Motion Pictures Opens at Last