Summer of Soul: The Music Fest that Gave Freedom to Thousands 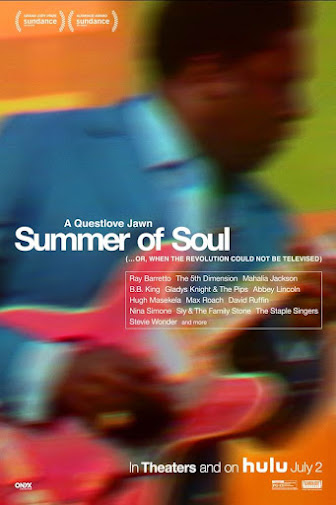 “Summer of Soul” is spectacular! A gleaming gem, beautifully crafted and assembled. A marvelous discovery!

In the heart of Harlem, New York – during the summer of 1969, a once-in-a-lifetime music affair called the Harlem Cultural Festival took place. It was when Woodstock grabbed all the headlines of the season. The black-music-theme event had little to no media coverage and was not even televised. In the end, nobody knew such a fantastic series of concerts existed.

The event was recorded, but the material was lost for over 50 years. Until now, that fantastic footage was discovered and put together effectively by the enthusiastic director Questlove.

The Harlem Cultural Festival drew a significant number of 300,000 euphoric and well-dressed black people who enjoyed every bit of the delights of Soul music in a peaceful party atmosphere. It was the day that many people felt free.

The plethora of interviews with some of the attendees is eye-opening. The vivid recollection of those remarkable moments filled their hearts with joy.

The Harlem Cultural Festival was a total revolution, musically and politically speaking.

The charismatic Tony Lawrence served both as a performer and MC.

Herbie Mann, The 5th Dimension, with their mega-hit “Aquarius/Let the Sunshine In” (Part of the musical “Hair”), was sensational. They were called “The black group with a white sound.”

Passionate Mahala Jackson made people throb with emotion. Gladys Knight named the Queen of Soul, said, “America had started to listen to their music, and it took them to the next level.” Integrity, class, and being polite are the key to success. Black people wanted to progress. They called the event the Neo-super Blackness.

Many attendees and musicians were very proud of their African musical roots. In addition, Mongo Santamaria and Ray Barreto presented their Afro-Caribbean Latin beat, giving voice to the Cuban, Panamanian, and Puerto Rican intense rhythms. The music from their barrio created a unique bond between the Latino and the Afro-American community flawlessly.

On that glorious day, Nina Simone’s determination and positive energy gave empowerment and confidence to the already excited congregation of beautiful black people.

The documentary emphasizes the political turmoil of those crucial years, including the assassination of Martin Luther King Jr. a year before. The killing of Democratic Presidential candidate Robert Kennedy early that year. The Vietnam War. The Civil Rights Movement and the moon landing.

The filmmakers did not mention another critical turning point in history, such as the Black Power Protest at the Olympic Games in Mexico City in 1968, giving them international recognition for the Civil Rights movement.

In terms of conceptualization, Stevie Wonder said some great words, “1969 was a pivotal year where the Negro died, and Black was born.” This means that Americans will stop using the “N” word from that day.

The logistics for the event had to be precise and well-organized. That includes sound quality, speakers, stage design, security, and sponsors – and to manage all of that, in an open-air venue, with little or no money was challenging.

Back then, segregated music became mainstream, but they called it “Freedom Music.”

In the film, every player’s background is worth learning, and the filmmakers showed that individually. The documentary intelligently shows who these people are, where they come from, their goals, and their passions.

“Summer of Soul” is a work of art that grasps America’s musical history with force and madness. The impressive material is presented effectively and efficiently in terms of structure and timing, and this extraordinary documentary is worth seeing for pure enjoyment.

Related Articles:
Clara Sola: Defines Feminism with Magical Realism in Costa Rica
The Academy Museum of Motion Pictures Opens at Last
Under the Volcano: The Golden Era of a Recording Studio in the Caribbean

DANCER” THE UKRAINIAN BILLY ELLIOT OF ‘TAKE ME TO CHURCH’