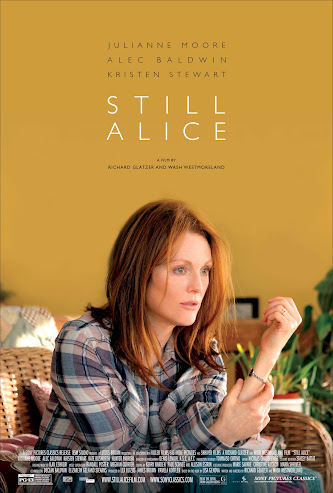 “Still Alice” is a sublime, elegant, and compassionate film about Alzheimer's. Julianne Moore's performance is brilliant and enduring. A major Oscar® contender.
Dr. Alice Howland (Julianne Moore: “Boogie Nights,” “Children of Men,” “Short Cuts”) is a prominent linguistics professor who is diagnosed with early-onset Alzheimer’s disease. Because she has “A Beautiful Mind,” her sickness advances faster than in other people. 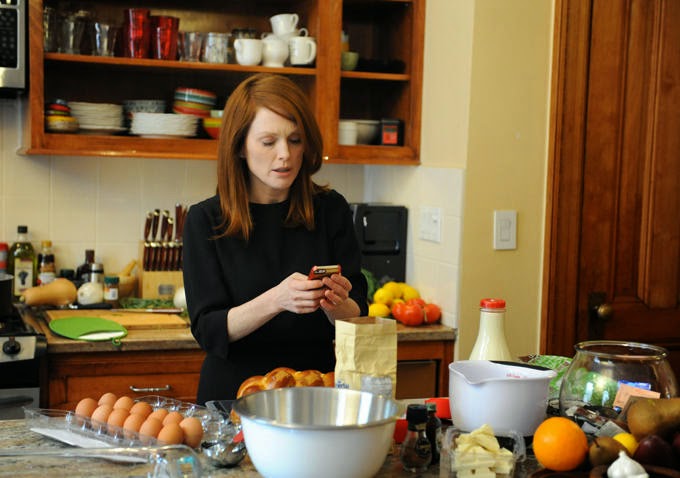 Her journey runs in three stages: denial, diagnosis, and decline. She will meet doctors, nurses, and caregivers that help her confronting the challenges and evolution of her symptoms.
At a Q & A hosted by Variety in Hollywood, someone asked: why Doctor Alice Howland does not return to work? Straightforward and a little controversial, the panel responded that many patients with other illnesses. After being diagnosed, get fired, in the movie is understandable why she doesn't go back to work. There is no needed to explain because the story focuses on Alice’s behavior, not on her job, like the critically acclaimed film “Philadelphia.” Julianne Moore pointed out: “This is a movie about life, joy, and mortality.”

During treatment, her loving family - a son, two daughters, and her husband – all care for her, but the conflict soon arises as they keep going with their lives, and she feels powerless in her own. Her emotions' intensity evolves as she struggles to connect her family, the neighborhood, and the world.

The film is carefully depicted from Alice’s perspective while she tries to convince herself and others: “I am not suffering, I am struggling.” The message is to remember Alzheimer’s patients whose awareness and quality of life can be maintained, though it may seem to those around them losing themselves.

Directors and husbands Richard Glatzer and Wash Westmoreland (“Quinceañera,” “The Last of Robin Hood”) researched and prepared meticulously to overcome some filming challenges such as a short shooting schedule, limited budget, and the fiercely cold weather in New York. Despite these challenges, they made an accurate and conscious adaptation of this best-selling novel by Lisa Genova without falling into melodrama.

The drama is kept to a minimum due to Moore's subtle performance and thanks to the perfect evolution of the dialogue.

Alice’s husband (Alec Baldwin) and daughter (Kristen Stewart) both keep their dialogs with her simple. Later, those conversations and actions turned deep, with a great sense of understanding and tolerance. Her daughter becomes her confidant, companion, and a reminder of her past.

Everybody knows that their lives will be different as Alice's disease progresses, but they maintain their love for her and do what they can to make her time easier. 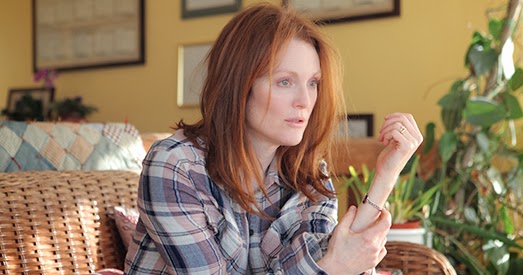 “Still Alice” reminds us of how Alzheimer's patients begin forgetting things, themselves, and the people and around them, and they are still people who need to be loved, emphasizing the values of compassion and respect.

“Still Alice” offers a humanistic approach to the illness, providing viewers with a sense of awareness and tolerance. This motion picture's message taught us how to be more patient with the elderly, especially our mothers.

Related Articles:
Makeup & Hairstyling Symposium 2019
“Ben is Back” So is Julia Roberts
“A Son of Man” Ecuador Center of “The New World”
“Roma” Anarchy and Repression in an Epic B&W Mexican Drama

“The Silence of Others” Speaks Up in Amnesiac Spain

“Shoplifters” The Universal Language of Stealing
THE BEST FILM FESTIVAL POSTERS OF 2018
The Best Latina-Theme Movies in America
Hashtag #OscarsSoFabulous
Copyright © 2014 Festival in LA
Posted by Festival in LA at Wednesday, December 17, 2014