The Square: An “Exit Through the Gift Shop” 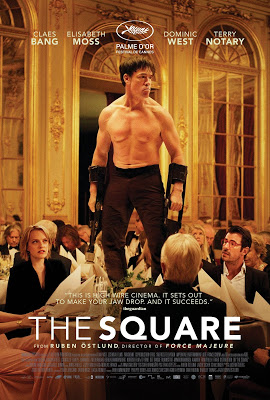 “The Square” is brilliant, intellectually and emotionally entertaining.

This sophisticated and well-told story centers on the Stockholm museum’s director and curator, Christian (Claes Bang), who through a new and provocative exhibit, falls, elegantly, into a personal and professional catastrophe. 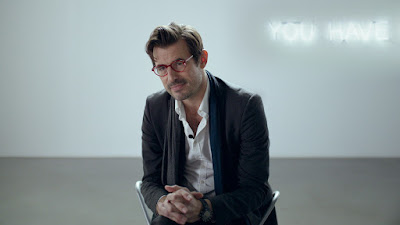 Pretending to be a role model, a good father, and a fantastic lover, he thinks he can take any woman to bed. In this case, an American reporter (Elisabeth Moss), who is covering the story of the museum’s new opening. After a few drinks, the reporter and the director have one of the funniest after-sex scenes ever. 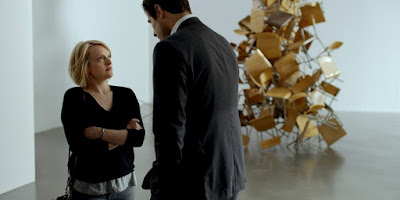 “The Square” is a wonderful satire placing humans in implausible situations blown out of proportion. As Christian says, “We, as a museum mustn’t be afraid to push boundaries.”
The humor has irony within. The mockery on sophisticated people that look like standup comedians is real. The sarcasm pushes everyone into corners of the arena.
Swedish director Ruben Östlund is the perfectionist who doesn't mind to do more than twenty-five takes until he gets what he wants from the actors. He says, in five takes you can't get the precise reaction from the performers.

In a conversation we had with Mr. Östlund, he freely expressed his thoughts on violence in a film, “We love violence in cinema because it doesn’t represent a treat or physical damage to us. Same with dark comedy, it has horror and amusement as well.”

In the director’s previous work, “Force Majure,” the conflict between husband and wife is do because of the husband’s passivity and inability to take action to protect his family from an avalanche, that makes him the most hated character in the story, from the wife and everybody else. In contrast with “The Square,” the male character is as susceptible and vulnerable as his female counterpart, regardless of his inability to make the right decisions.

In the director' body of work, notorious is the influence of Lina Wertmuller’s misogynist film “Swap Away” (1974) with its battle of the sexes. And another subtle reference is the surrealistic Oscar winner “The Discreet Charm of the Bourgeoisie” by Luis Buñuel.

The film, far from been condescending, is a rigorous critic of today’s society. 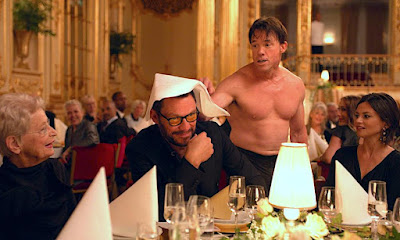 The audience who assisted to the world premiere at the famous French Riviera Film Festival saw themselves reflected in the big screen because the actors in the movie were also wearing tuxedos and nightgowns. The spectators identify with the actors because they looked alike.


The story went furthermore when the performers representing the rich people in the scene, contemplate a man acting like an orangutan. He, aggressively, started capturing the patrons' fear with his hunting instinct, pushing boundaries to the limit. 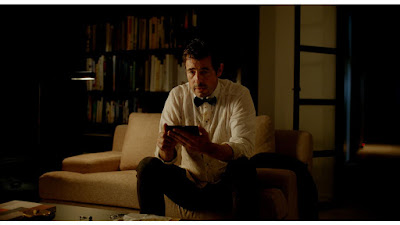 While making the invitation to discover what is inside “The Square,” the director added to the conversation, “Human beings are very simple and easy to change their behavior.”

Anarchy is represented through animal behavior, contrasting with the people’s right intentions and also with the true meaning of art.
Pretentiously conceived to win the Palm d’Or in Cannes, the film aspires to perfection with its terrific cast and original story, but its narrative pushes its theme so hard that misses its substance internally – Then the movie becomes conceited and hard to believe.

The 2017 Palm d'Or winner is elegant and fun to watch, but you can't depend too much on what is real and what is not. The question is if you dare to enter to see and experience “The Square” at a museum or opt out to "Exit Through the Gift Shop."

Related Articles:
THE ACADEMY MUSEUM OF MOTION PICTURES OPENS AT LAST
“A Fantastic Woman” Love, Grief, and Compassion in Santiago
“In the Fade” “Revanche” in Hamburg
9 FOREIGN LANGUAGE FILMS ADVANCE IN THE OSCAR® RACE 2018
SEVEN GREAT FOREIGN FILMS SHOWCASED AT AFI FEST 2017
“Endless Poetry” The Atypical Universe of Alejandro Jodorowsky
“Polina” From the Classic Russian Ballet to the World of Contemporary Dance
“Cezanne and I” An Extraordinary Journey of Art and Friendship
“Elle” The New “Basic Instinct” with a “French Twist”
“My Life as a Zucchini” The Beautiful Animated Life of a Little Swiss Boy
“Neruda” Runaway Poet
Copyright © 2018 Festival in LA
Posted by Festival in LA at Sunday, January 28, 2018