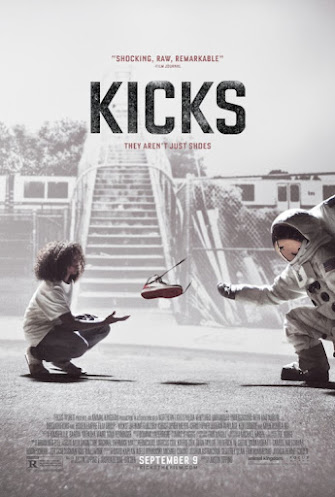 “Kicks” is one of the best and freshest independent films of the year, yet ingenious and original.

This new coming-of-age story builds tension in eighty minutes of wondering characters surviving in the slums of America.

The first fifteen minutes of the film seem to be the most extended Nike Air Jordan’s commercial ever. This story is not about an ordinary tennis shoe, it is about "THE JORDANS."

Once the main character starts looking for what is worth in life, is when the action takes off.

In the suburbs of Oakland, California, we meet Brandon (Jahking Guillory), an introvert teenager who likes to hang out with his older buddies, Rico (Christopher Meyer) and Albert (CJ Wallance). They love to smoke, drink and rap.

Brandon, after being beaten up in a very humiliating incident - he and his friends set off on a quest to recuperate his biggest treasure, his stolen tennis shoes.
A confrontation like that happens all the time anywhere, it is real - people can get killed over a backpack.

In “Kicks,” the city plays one of the main characters.

The teen-drama moves from a small, impoverished ghetto to a more significant and more dangerous part of the town, where the big boys play with huge cars, easy girls, loaded guns and plenty of drugs.

While the meanest guy in the “barrio,” Flaco (Kofi Siriboe), physically abuses Brandon (14), his five-year-old also is also getting abused.

Flaco tries to teach a lesson to his son, but he has no moral authority over him - this is a fundamental element woven through the plots and subplots of the movie.
“Kicks” underlines a cycle of abuse. The irony comes when someone preaches respect, while he is no respecting those who are vulnerable.

The young actors of "Kicks" are terrific. They had fun working with director Justin Tipping.

Justin said: “I was terrified the first day of shooting! It was like a weird experience and at the same time, it was incredible to work with all of those talented kids.”

“Kicks” is a remarkable film debut for the director Justin Tipping.


The musical evolution of the film unfolds the drama.
The director, cleverly, incorporated hip-hop in the beginning to foreshadowing the rap that plays later, showing the transformation of a fragile teenager molding into a robust young adult.

In other parts of the world, some movies about troubled kids have been made in a similar tone. For example, the award winner Mexican production “Güeros,” last year’s independent sensation “Dope,” the Oscar winner “Tsotsi” from South Africa, "My Brother the Devil" from the U.K., and the iconic “Boys n the Hood” by John Singleton.

A ray of hope can be seen in the desolated universe of “Kicks” where friendship remains unbroken.

The film is slightly predictable but satisfies the audience who cheers for the main character, the vulnerable teen who wants to take justice into his own hands. If he succeeds or not, this is worth trying.