In the Fade; “Revanche” in Hamburg 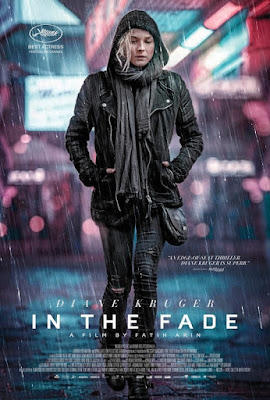 “In the Fade” is an intense, game-changing thriller that will make you see humanity with a whole new perspective.

This year’s winner of the Golden Globe and the Critics’ Choice Awards is a brilliant German feature directed by Fatih Akin (“Goodbye Berlin,” “The Edge of Heaven,” and “Head-On”).

The story begins with a fun, loving, interracial German-Turkish couple in Hamburg. Their lives are about to change by a tragic event perpetrated by a White Supremacist.

After a terrorist attack outside the couple’s office, Katja (Diane Kruger) is beyond consolable. She loses herself to a deep depression where suicidal thoughts seem to be her only peace.

The arrest of the two suspects in the case of the murder of her son and husband will confront her with them in court, only to further hate.

When justice eludes the victim, vengeance is an obsession, and it becomes a drug of choice. Not thinking clearly and out of options, she firmly believes retribution is now hers to execute.

Winner of the 2017 Best Actress award at Cannes, Diane Kruger’s performance is terrific and emotionally intense. Her tremendous energy creates an electric connection with the audience.

“In the Fade” has a very well-researched script, displaying through its legal jargon a very vivid German courtroom scene with their proper cultural actions as every character unfolds entirely in the story.

Turkish-German Director Fatih Akin made a film very personal by adding to his vision a racial struggle of his own.

Without being unapologetic, the film presents the raw and sad sentiment of racial intolerance that darkens the world.

For instance, the word “Neo-Nazi” was meticulously mentioned only in two crucial moments of the story. The director was sure to never show swastikas and other fascist symbols. He cleverly removed all the free propaganda that only benefits those radical groups by saying, “We are aware of them, and we are not afraid.”

American films rarely touch this controversial subject as sordid and vividly as Europeans do. The different realities influenced the way they tell their stories differently.

It is worth mentioning two significant American landmarks, “American History X” (1998) and the documentary “Oklahoma City” (2017).

The European and Middle-East productions are much bolder. Those films are essentially more authentic about domestic terrorism, such as the French show “Made in France,” “Les Cowboys,” and “Carlos.”

Oscar nominees “Paradise Now” and “Omar” from Palestine are transcendental regarding what we can learn from their history of violence.

“The Attack” from Lebanon is another powerful film about endless war.

Israel also has many terrific films on the issue, such as “Bethlehem” and “Adjami.” Morroco produced “Horses of God” and “Death for Sale,” portraying their restless youth no other country could do. “In the Fade” is told in chronological order, and its structure is in two acts - a courtroom drama and an intense psychological thriller. Its assembly must be more creative to make its linear system less predictable.

More daring editing is needed with a back-and-forth narrative that could add a more thought-provoking concept, similar to the composition and complexity of films like “Pulp Fiction,” “Babel” or “Irreversible.”

“In the Fade” is a well-recommended flick; it has won many awards worldwide but failed to get an Oscar nomination for Best Foreign Language Film in 2018. It must be why the Academy members skipped this award winner German import.

“In the Fade” is a challenging project that works well as catharsis about the pulsing of a modern World immersed in a Social Crisis.
In the Fade - Official trailer

“A Fantastic Woman” Love, Grief, and Compassion in Santiago
“The Square” An “Exit Through the Gift Shop”
9 FOREIGN LANGUAGE FILMS ADVANCE IN THE OSCAR® RACE 2018
SEVEN GREAT FOREIGN FILMS SHOWCASED AT AFI FEST 2017
“Endless Poetry” The Atypical Universe of Alejandro Jodorowsky
“Cezanne and I” An Extraordinary Journey of Art and Friendship
“Elle” The New “Basic Instinct” with a “French Twist”
“My Life as a Zucchini” The Beautiful Animated Life of a Little Swiss Boy
Roma and Ten New Mexican Trailers