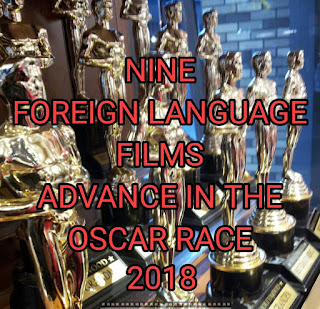 A new record of 92 hopefull countries submitted a film for the 90th Academy Awards consideration in the Foreign Language Film category - including six nations presenting a movie for the first time, Honduras, Haiti, Laos, Mozambique, Senegal, and Syria.

From the long list of Foreign Language submissions announced last month, only nine films advance in the Oscar® race, the five films will be nominated later next month.

Email ThisBlogThis!Share to TwitterShare to FacebookShare to Pinterest
Labels: A Fantastic Woman, Chile, Foreign films, Germany, Hungary, In the Fade, Israel, Lebanon, Loveless, On Body and Soul, Oscars, Russia, South Africa, the Academy, The Insult, The Square, The Wound