You're Killing Me: Dating a Serial Killer Has a Good Sense of Humor 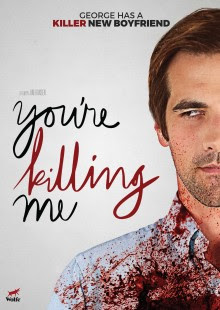 “You’re Killing Me” is an absurd romance-slasher gay movie with a twist of dark humor. Twisted and weird, naive, and wacky.


Joe (Matthew McKelligon) is a regular, insensitive guy who can’t open up to other guys.
Quickly bored at the superficial gay gatherings, Joe turns to a killing spree, funny but honest.

Joe, the killer, stalks George (Jeffery Self), and they soon start dating.


George is an excellent-looking narcissist and an Internet Star. He and his friend Barnes (Bryan Safi) have a trendy, fun, and flashy Drag Show on-line. They report who they see at the Target Store in West Hollywood and other banal topics that go viral on Social Media.

George naively thinks Joe is hot and anything else.


The relationship gets interesting when Joe, the killer, confesses all his crimes.

George, the Internet Diva, doesn’t take things too seriously. Instead, he feels flattered and falls for the serial killer.


George is happy to have someone attractive near him, and Joe is content to finally meet someone who listens and understands him.

For Joe, he can introduce George to his parents, no matter how awkward the situation.
When George’s friends get in the way, they disappear mysteriously, one by one.

The ones still alive take a while to see the sign; theyy react when the danger is imminent.


The original dialogs are fascinating, from George’s greeting voicemail to the harsh lines of Joe:

“Hi! Leave a message or text me like a normal person.” George.


“The killer is someone the victim always knows.” Friends.


“I’m glad I got to be with you when you’re going wild.” George.


I genuinely love this director Jim Hansen (from the smash viral series “The Chloe Videos”).

Hansen can correctly show American society's disconnection from real-world issues and how candid and self-centered most Americans can be.

No matter how dramatic the situation turns, a “whatever” will immerse them in the tiny little bubbles of their fantasy world.

After all, there is nothing wrong with living in “La-La Land.”

In “You’re Killing Me,” Hansen worked with actors he knew and trusted but missed a significant opportunity to show the diversity of the gay community by adding more characters from different backgrounds. Clearly, this movie was made before the #OscasSoWhite controversy.

Although the editing is wacky and out of rhythm, the thrilling moments are funny, which is good enough to provoke a nervous laugh.
“You’re Killing Me” is not the regular serial-killer type of movie, and indeed, Joe is not the kind of guy you want to go out with or fall in love with, but at least he is someone who pretends to listen when you have nothing valuable to say.
“You’re Killing Me” was the most talked-about movie at OUTFEST 2015; some of the audiencehatede it, and others like me loved it.
TRAILER:

Related Articles:
“A Fantastic Woman” Love, Grief, and Compassion in Santiago
“Cezanne and I” An Extraordinary Journey of Art and Friendship
“Elle” The New “Basic Instinct” with a “French Twist”
“My Life as a Zucchini” The Beautiful Animated Life of a Little Swiss Boy
“KICKS” A BUNCH OF KIDS OF COLOR ROAMING IN SUBURBIA
“Güeros” A Lyrical Love Letter to Mexico City
“Neruda” Runaway Poet
“Colossal” Not Your Typical “Godzilla” Movie
20 BEST GAEL GARCIA BERNAL MOVIES
The World’s Best Female Lead Singer Movies