Cezanne and I: An Extraordinary Journey of Art and Friendship 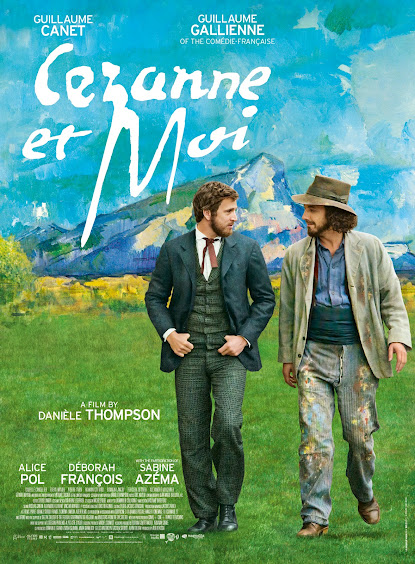 “Cezanne et moi” is a highly accomplished time-period film about art, love, and the friendship between two of the most significant artists of the 19th-century who reached everlasting fame, Paul Cezanne, the neglected painter, and Emile Zola, the celebrated author.
The exquisite French production develops into an intimate biopic that recalls the lives and camaraderie of the two legendary artists.

The nonlinear story goes back and forth from present time to their childhood, adolescence, and the various stages of their adulthood.
The friendship between the writer and the painter begins when Emile Zola, bullied by his classmates for being a fatherless son of an Italian immigrant, meets Cezanne, the rich boy who defends him in a catholic school located in a small province of France.

Their ambitions motivated them to move from the quiet Mediterranean hillside town of Aix-en-Provence to Paris. In Montmartre and Batignolles, Inglewood, they met other emerging and well-established artists such as Monet, Renoir, Bazille, Morisot, and Cassatt.

Zola and Cezanne become roommates. They slept with the same women and fell in love with many of dubious reputations. In those difficult times, the artists struggled to the brink of starvation.

Zola's background was not French, but he was eloquent and descriptive in his writings.

Fame and fortune came first for the writer, while the painter wrestled his demons.

Cezanne hated himself so much that he destroyed some of his most valuable artwork. He was not alone; his unique, groundbreaking Impressionist style sparked negative reviews from other classic artists regardless of the approval chord struck among the young art lovers.

This feature film perfectly depicts how the two friends lived their lives in their opposite worlds, with their trials and failures. The artist followed their true passions.


Frustrated for being ignored by the Academy of Arts, Cezanne hit rock bottom. Yet, Zola always cared for his friend.

Cezanne expresses his emotions to Zola deeply, in a lucid moment, “I would like to paint as well as you write.” And continues, “If I live with a man I love, I should live with a woman who hates me, yes?” Then, when their friendship gets tiresome, he finishes with a sentimental note “I can't remember why you love me so much.”


The prestigious Academy of Arts qualified Zola's books “Germinal” and “Nana” as vulgar and obscene. French readers had a big appetite for those stories regardless of the scandal. His success was imminent.


The experiences of Zola in brothels are not depicted in the film as he transcribes those into his controversial novels. A brief juxtaposition of Zola's bacchanals could help to illustrate the writer's controversial life. That could be one of the reasons why this ambitious biopic got such mixed reviews in France.

On the other hand, showing the downside of the Parisian night scene would take away much of the film's central theme, the friendship between two great artists.

Actors Guillaume Gallienne (Cezanne) and Guillaume Canet (Zola) are magnificent in their respective characters; their performances are outstanding.

The film is remarkably directed and written by Daniele Thomson ("Avenue Montaigne," "It Happened in Saint-Tropez/Des Gens qui s'embrassent"). Mrs. Thomson's years of experience in filmmaking delivers an essential and transcendental film about the lives of two of the most celebrated artist in French history.


Daniele Thomson's style for writing comedy is subtle, sharp and elegant. Mrs. Thomson is the Woody Allen of French Cinema.

Ms. Thomson's writing style is delectable. She works on the dynamics of conversations and enlarges the dialogue to transmit the proper emotions from the actors to the audience.
The lavish photography is evocative and utterly beautiful. Legendary French cinematographer Jean-Marie Dreujou ("Two Brothers," "Balzac and the Little Chinese Seamstress") made an incredible work bringing to light those amazing visuals that relate so vividly the contrasting lives of the writer and the painter.
The original music composed by Erik Neveux (Intimacy, The Attack) is exquisite and extraordinary. The violins, cellos, guitars, and flutes reverberate flawlessly, enhancing the mood according to the story.

The music has plenty of natural and evocative sounds that create the appropriate ambiance of the time period with grace, harmony, and elegance.

Viewers will experience a gorgeous film full of art, passion, and those beautiful moments that go along with a lifetime friendship.
"Cezanne and I" official trailer

“A Fantastic Woman” Love, Grief, and Compassion in Santiago
“In the Fade” “Revanche” in Hamburg
“The Square” An “Exit Through the Gift Shop”
“Endless Poetry” The Atypical Universe of Alejandro Jodorowsky
“Elle” The New “Basic Instinct” with a “French Twist”
“My Life as a Zucchini” The Beautiful Animated Life of a Little Swiss Boy
“Güeros” A Lyrical Love Letter to Mexico City
“Neruda” Runaway Poet
“Colossal” Not Your Typical “Godzilla” Movie
“KICKS” A BUNCH OF KIDS OF COLOR ROAMING IN SUBURBIA