Lunana: A Yak in the Classroom, Children Bhutan's Hidden Treasure

“Lunana: A Yak in the Classroom” is sublime and heartfelt. An unforgettable “Journey of Hope” to the top of the Himalayas.

Ugyen Dorji (Sherab Dorji) is an educated and determined young teacher from Thimphu, the capital of Bhutan.

Ugyen, like many other blossoming adults, enjoys modern music, karaoke bars, and nights out with friends. His ultimate goal is to abandon the national schooling system, emigrate abroad, and become a famous rock star. However, being bound to a long-term contract, his ambitious plans fail, and to settle his commitment to the State, he is sent to the world’s most remote school to instruct children in need.

As a mentor, Ugyen is aware of climate change and global warming. However, he must experience firsthand the importance of maintaining a harmonious balance between the earth, people, and mother nature. The mountain will mold his attitude, and to fit in, he must find the “karmic connection.”

In Bhutan, villages are so isolated that they can only be reached in five or more walking days. Lunana has only 56 residents, and the school is high at 4,800 meters in altitude.

For Ugyen, meeting the children, their quaint schoolhouse, their yak-centered world, and hearing high above an enchanting song help him to make up his mind. 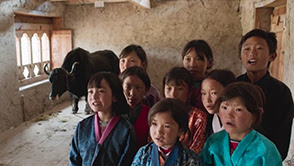 Despite the filmmaking fright opposed to working with children or animals, director Pawo Choyning Dorji had a sacred yak ruminating freely inside the classroom, becoming an essential part of the story. He also worked with a group of incredible children who had never as much watched a movie before and yet were charismatic and enthusiastic.

Filming in a remote location also compelled the director and crew to adapt to limited logistics. The only electrical power source there was unpredictable local solar – as we see Ugyen’s MP3 player drying up – it affected the filmmakers. They had to shoot everything without watching dailies, making the editing and post-production more challenging.

Bhutan has no funding for arts and crafts, much less any budget for filmmaking. Choyning Dorji had to look for help overseas, and he received some economic aid and equipment from India, Japan, and Australia. His next project is called “Once Upon a Time in Bhutan...” 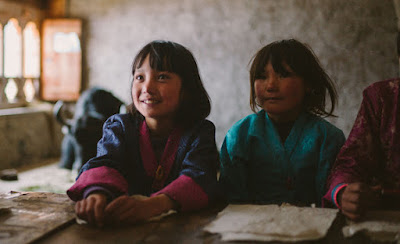 The First Amendment of Bhutan’s Constitution states: “It is the government’s responsibility to make its citizens happy, and if the government fails, the government has no right to exist.” Bhutan is the happiest country on earth and also one of the poorest.

“Lunana: A Yak in the Classroom” is Pawo Choyning Dorji’s exceptional first movie as a writer, director, and producer – it also became the opportunity to expose his art and creativity to the world regardless of his country’s limitations. Pawo learned his skills working as a cameraman and producing for the award-winning monk and filmmaker Norbu. 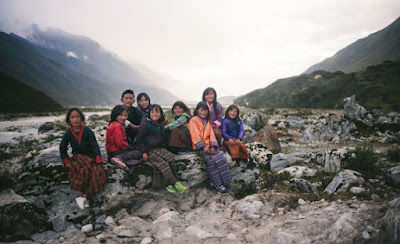 After traveling around the international film festival circuit and being nominated for the 94th Academy Awards in the category of Best International Feature film, a modest and yet beautiful project from Bhutan has attained unprecedented exposure - even among the locals, schoolchildren, and monks in the remote temples and monasteries who also experienced and embraced the film journey joyously.

The fact the Oscar-nominated Bhutanese film “Lunana: A Yak in the Classroom” is a study of symbolism where dress codes accentuate styles and status between women and men - peasants and leaders. The dress codes are required nationally in public buildings and ceremonies based on modesty and traditional Buddhist respect.

The dialog is meaningful, and the semantics convey political and religious connotations that help the public learn more about Bhutan, an independent country protected by India from China’s interest after China annexed Tibet and the Buddhist leaders left in 1959. 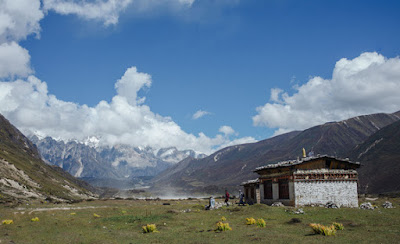 To avoid dwelling on the common stereotypes of snowy mountains, the film’s breathtaking cinematography focuses on landscapes with people, especially in children’s faces, as a mirror that reflects their purest emotions.

Songs and music provide a rewarding companion to the story; the lyrics connect the land, the people, and the spirits of the mountain. Who would have guessed a movie from Bhutan could be so transcendental in our days of isolation during the pandemic?

Watch “Lunana: A Yak in the Classroom” and let your inner teacher come out and live through the wonder felt by the children of this magnificent movie.