Olga: The Ukrainian Gymnast Who Represented Switzerland at the European Championships

COLCOA REVIEW: “Olga” is an impeccable, realistic, and captivating dramatization of a Ukrainian gymnast who struggles to achieve her dreams in and outside her country.

The Swiss/French co-production is a fascinating and honest portrait of the world of gymnastics and what athletes must do to participate in international competitions. Young female athletes undergo intense “military” training conjoined with a tumultuous external political environment affecting their mental health and well-being. 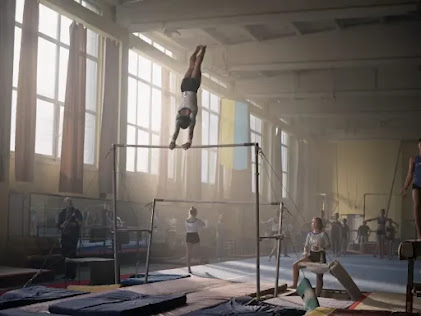 Olga, a 15-year-old Ukrainian gymnast an exile in Switzerland, works tirelessly to secure a place at the country’s National Sports Center and compete at the European championships. 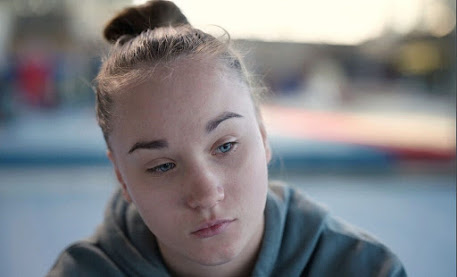 The story progresses from her specific physical training to the external political conflict afflicting her homeland and touching Olga’s psychological stability.

Her mom is a notorious journalist who works uncovering the corruption cases and the refusal of President Yanukovych to sign the free trade agreement with the European Union. During Ukraine’s Euromaidan of 2013, Olga’s mother became a victim of political persecution, repression, and brutality.

Witnessing the riots in Switzerland, Olga suffers anxiety and excessive psychological damage that affects her performance. Far from her Ukrainian teammates, she still can connect with them through a smartphone, where she catches a glimpse of what is happening with her mom from the palm of her hand.

The film simultaneously displays the girl’s experience of the political crisis of her native land, her adolescent crisis, and the immigrant challenges of her social world.

First-time French director Elie Grappe pulls off a compelling work. Fortunately for the director, project, and viewers - she is both a professional actor and athlete accustomed to competing in large-scale arenas.

In a related real-life story, the turmoil that affected the US gymnastic team at the Tokyo 2020 Olympic Games was psychological pressure, mental stress, and other external factors that physically undermined the athletes’ performances. As the news of the American team’s challenges spread worldwide, the timing of “Olga’s” release could not be better as an inspirational beacon appropriate for thousands of young athletes who dream about participating in Olympic competitions and can feel related to Olga’s experience. 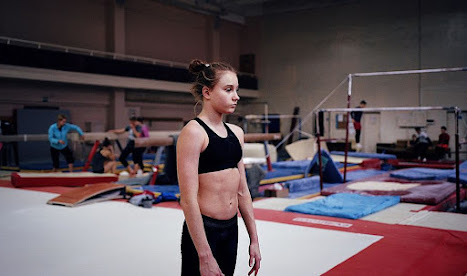 Elie Grappe gave enough space to the young actresses to display their emotions, as he wanted to show their passion, desires, and true nature right from the beginning. The story focuses on a young girl with a strong body in an athletic complexion who is ready for an international championship.

Elie Grappe tells the story with authenticity through functional and spacious settings, clearly intended to endow his first feature film with a “documentary look,” creating dramatic moments in intimate settings.

The director made the good work an essential part of the film to build every scene’s intensity focusing on the athlete’s stress, training, failures, and accomplishments. He wanted to show the main character’s anger and confrontation with the rest of the world with sounds, acoustics, and vital musical tones. He thus bolsters the whole atmosphere by recording the participants’ training with dynamic microphones.

French director Elie Grappe emigrated to Switzerland when he was 17, and it took him ten years to make “Olga.”

The Covid-19 crisis, too, severely impacted the crew during the locked-down. When one of the members died, filming was suspended. After a year, they faced another challenge, returning to complete the movie. Evidently, the young actors had grown relatively quickly and did not look the same as they had before the pandemic.

The editing slows down the action, and Olga’s failures are repetitive, as the audience keeps wondering if she will eventually succeed. 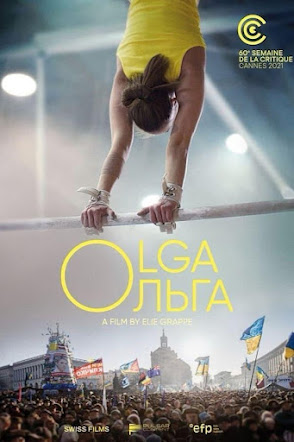 Selected as the Swiss entry for the Best International Feature Award at the 94th Academy Awards, “Olga” is the winner of the SACD Award at the Critic’s Week in Cannes 2021. It also won Best Picture at the Brussels International Film Festival and Best Feature at Hamburg.

“Olga” is about the struggles and choices a gymnast has to make to become somebody, whether she wants to be a Swiss champion or a Ukrainian patriot.