The Art of Self-Defense: Can Karate Cure Loneliness in a Hyper-masculine World? 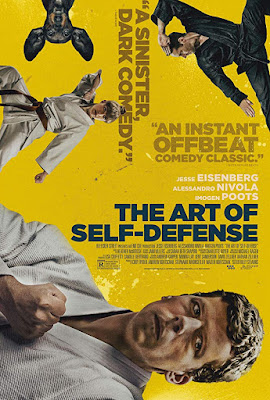 “The Art of Self-Defense” is a hilarious and quirky dark comedy you don’t want to miss. One of the best independent films of the year! The performances of Jessie Eisenberg, Alessandro Nivola, and Imogen Poots are remarkable!

Not so long ago, Meryl Streep said there is no art in football and Mixed Martial-Arts. Many around the world won’t agree - not even Casey (Jessie Eisenberg), who enrolls in karate lessons after a random violent attack.
By submerging himself in this shadowy world of Martial-Arts, Casey will try to gain self-confidence, strength, and a more manly personality.

At the dojo, he gets welcomed by Anna (Imogen Poots). She is a confident young but alienated karate instructor. For being a woman, she is relegated to teaching children in the mornings instead of participating in the evening competitions against men. Those combats could get her closer to her ultimate goal, a well-earned black belt.
The grandmaster is Sensei (Alessandro Nivola). His strange and magnetic personality makes him look lifelike. He wants to be in control. His captivating charm lures Casey into his business for mind and body training.

When actor Alessandro Nivola read Riley Sterns’ great script, he thought; it was original, intricate, and somehow controversial. Those are the critical ingredients for an independent film to succeed. In the screenplay, he saw the importance of emphasizing the dialogue with personal tones.
Nivola was worried about learning karate in four days rather than incorporating complicated long sentences into his part. During the shooting, Nivola took a deep breath, knew his lines, and delivered them the best he could. Nivola is terrific playing a low-key psycho:

“Karate is a way of communicating.”
“Never hold back; it makes you weak.”

Sensei is a master in the art of manipulation. He articulates a sinister plan to keep up with his image and thrive in business in his martial arts school.

Alessandro Nivola undertones his character to make it more realistic. Sensei enjoys playing God with subtle cruelty by controlling his kingdom and minions, similar to Ed Harris in “The Truman Show” (1998). A performance that earned Harris an Oscar nomination for Best Supporting Actor that year.
In “The Art of Self-Defense,” director Riley Stearns accurately explores “male loneliness” and makes his actors move up to the next level. Christian Bale in “The Machinist” accomplished a similar interpretation as Jack Plotnick in the movie called “Wrong” by Quentin Dupieux.
Jessie Eisenberg performing the lonesome character is insightful. His impotence and frustrations are evident in every action. His passive/aggressive personality grows bigger until he becomes the person he means to be.

In “The Art of Self-Defense,” Jessie Eisenberg is not a “Rocky,” but he can pull out a show.

The secret in this movie is to discover how the behavior of an almighty and powerful character affects everyone and how the rest of the group could eventually counterattack.

In a cruel world, we must make the best of it. After seeing “The Art of Self-Defense,” you may think twice about signing up for some excellent karate lessons to steam your life.
THE ART OF SELF-DEFENSE - Official trailer

Related Articles:
THE BEST FILM FESTIVAL POSTERS OF 2019
“The Final Master” A Cinematic Feast of Martial Arts
“The Silence of Others” Speaks Up Amnesiacs in Spain
“Shoplifters” The Universal Language of Stealing
“Ben is Back” So is Julia Roberts
“Destroyer” Nicole Kidman Vs. Gangs of LA
“A Son of Man” Ecuador Center of “The New World”
“Roma” Anarchy and Repression in an Epic B&W Mexican Drama
“GOAT” WHITE BOYS DO CRY
“Invisible Life” Melodrama is Not Dead Thanks to Brazilian Cinema
The Painted Bird: In the Dawn of the Holocaust
The Best Latina-Theme Movies in America

TO ACCESS OUR INTERACTIVE FILM FESTIVAL CALENDAR FROM YOUR MOBILE DEVICE, CLICK: View web version.
Festival in LA ©2019
Posted by Festival in LA at Monday, July 08, 2019