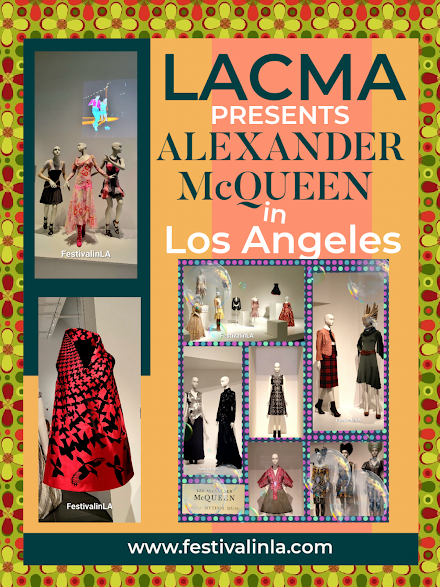 The museography focuses on the artistry, creativity, and body of work of the prolific Scottish designer from 1990 to 2010.

LACMA’s buoyant exposition spotlights the dresses, fabrics, and accessories of the fashion virtuoso who killed himself in 2010 at the age of 39, right after the passing of his mother.

The museum displays many classy McQueen garments from the Regina J. Drucker Collection, joining with other LACMA’s permanent collection artworks.


McQueen founded his label in 1992. The four-time winner of the British Designer of the Year was chief designer at the Givenchy firm from 1996 to 2001.

MacQueen’s fame flourished, making him the recipient of the International Designer of the Year award in 2003.

Visiting the "Lee Alexander McQueen: Mind Mythos Muse” exhibit is an eye-opener and a unique opportunity for the people of Los Angeles to explore, admire, analyze, and understand Alexander McQueen’s legacy.

The McQueen exhibition at LACMA is presented at the Resnick Pavilion and will be open to the public viewing until October 9, 2022.

After going to LACMA’s installation, consider complementing the visit by watching at home on Hulu or Prime Video “McQueen,” a profound and bold documentary made in 2018 that focuses on the life of the controversial monster of fashion and design Lee Alexander McQueen.

YOU ARE READING FROM A MOBILE DEVICE, CLICK: view web version FOR OTHER COOL FEATURES SUCH AS TRANSLATE POWERED BY GOOGLE, AN INTERACTIVE FILM FESTIVAL CALENDAR, AND MORE AWESOME ARTICLES.