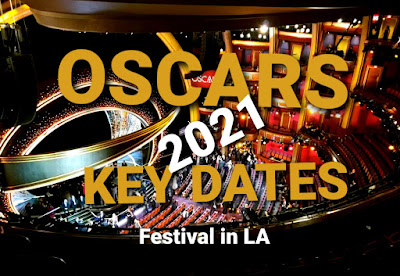 Due to the extreme circumstances of the pandemic, closure of movie theaters, and adjustments to the “New Normal,” this morning the Academy of Motion Picture Arts and Sciences announced important new key dates for the Oscars 2021.

The new time-frame for an award eligibility is now from Jan 1st, 2020 to February 28th 2021. This means, producers, talent, and distributors will have more time to exhibit their films, campaigning, and conquer the vote of the Academy members.

For the fourth time in history, the Academy delayed the Awards: In 1938, the Academy moved the ceremony days after the big floods of Los Angeles. In 1968, the assassination of Martin Luther King Jr. also delayed the ceremony. In 1981, the homicide attempt against president Ronald Reagan moved the awards as well. Now, in 2021 the delay is because of the pandemic – closure of studios, productions, and movie theaters.

The new multicultural Board of Governors is taking important and transcendental actions regarding diversity and inclusion. Plus, the required participation to an annual Unconscious Bias Training for Governors, branch executive committee members, and Academy staff. The course is open to all the 9,000+ members.

These critical changes and adjustments are necessary to benefit not only the Academy Awards, movies studios, or distribution companies, but also for everybody's safety, representation, and inclusion.

Related Articles:
Adam: Women’s Resilience in Morocco
Les Misérables: Boyz n the French Hood
And Then We Danced: Folk, Love & Pride in Georgia
Invisible Life: Melodrama is Not Dead in Brazilian Cinema
Parasite: Accomplishes the South Korean Dream
Pain and Glory: Almodóvar's Blast from The Past
The Cave: An Underground “Elysium” for Children in Syria
Honeyland: The Last Beekeeper of Macedonia
“Shoplifters” The Universal Language of Stealing
Birdman Flies High For Accomplishment and Awards
The Painted Bird: In the Dawn of the Holocaust
“Papicha” Girls Just Want to Have Fun and Freedom in Algeria
“Birdman or (The Unexpected Virtue of Ignorance)” Flies High
“Roma” Anarchy and Repression in an Epic B&W Mexican Drama
Synonyms: A Good Jew in Paris
NINETEEN BEST FILMS OF 2019 - FESTIVAL IN LA
THE BEST FILM FESTIVAL POSTERS OF 2019
IF YOU ARE READING FROM A MOBILE DEVICE, CLICK: view web version FOR OTHER COOL FEATURES SUCH AS TRANSLATE POWERED BY GOOGLE, AN INTERACTIVE FILM FESTIVAL CALENDAR, AND MORE.
Festival in LA ©2020
Posted by Festival in LA at Monday, June 15, 2020