My Life as a Zucchini: The Animated Life of a Swiss Boy 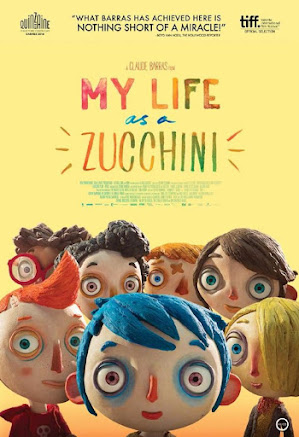 "My Life as a Zucchini" is the most gorgeous film of the year! A heartfelt stop-motion animation, colorful yet sweet and tender. A masterfully crafted coming-of-age Swiss production suitable for children of all ages.

The animated story recounts the early life of an introverted nine-year-old orphan named Icarus. His mother nicknamed him Zucchini. From then on, Icarus proudly keeps the Zucchini moniker to honor his mother's memory. 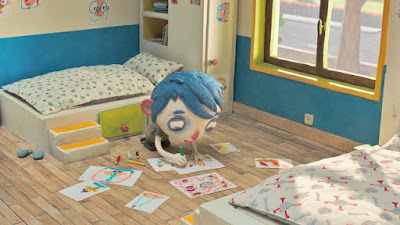 Zucchini is the wallflower kind of kid who is also an excellent storyteller who communicates his experiences through drawings.

His big eyes are two transparent windows that reflect the purity of his soul, emotions, and real feelings.
Looking at those big eyes, we can tell when Zucchini feels lonely, sad, depressed, nostalgic, jealous, happy, or in love for his new friends. Zucchini once said, “Sometimes, we also cry of happiness...” 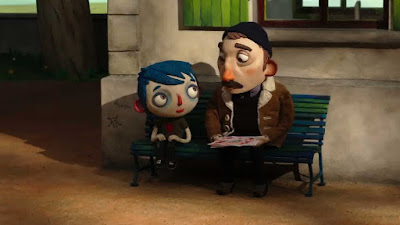 Zucchini has to assimilate the passing of his mother by using the help of Raymond, the supportive cop who tells him that his mother is already in heaven and she is Okay. There is no need for a guilty feeling.
Director Claude Barras identifies his childhood with these fantastic characters. He is influenced by classics such as the “400 Blows,” “Nobody's Boy: Remi,” “Heidi,” and “Bambi.”
Zucchini and his friends have one thing in common: they all lost their parents in particular circumstances.

Barras comments that no matter how obscure the story is, we always find ways to tackle those critical subjects with children. As the Brothers Grimm did in Germany with their dark stories told in their own exciting way.

Zucchini is a dark novel that departs from the depiction of a kid who kills his mother with a shotgun. Those tragic stories happen almost every day in real life; not many can tell.

“My Life as a Zucchini” is a faithful adaptation to the screen of Gilles Paris’ Autobiography. Screenwriter Celine Sciamma (“Tomboy”) laid down an elegant and subtle screenplay on the page. She knew the story had to be up for kids of all ages. So, she wrote a less ghastly adaptation from the writer’s experience.

Inside the Fountain’s Foster Home, Zucchini and his “diverse” buddies are from different backgrounds and represent the most needed inclusion and diversity in cinema.

The Zucchini gang teaches us an unforgettable lesson, “No matter how rough life can be, there is always hope for a better future.”

Simone is the red-headed sloppy boy, who knows everybody's story. Ahmed is the soul of the party. Jujube is the chubby, gluttonous/hypochondriac. Alice is the shy blonde who hides under her hair. The gentle African girl is Beatrice. And Camille is everybody’s sweetheart, a proactive, confident, lovable girl.

The ten-inch-tall puppets were beautifully handcrafted and came to life in a simplistic but realistic form. The dolls were made of latex, silicone, wires, and fabrics.

The ten-inch-tall puppets were beautifully handcrafted and came to life in a simplistic but realistic form. The dolls were made of latex, silicone, wires, and fabrics.

When the puppets needed a change of clothes for the next scene, the production stopped for the night. 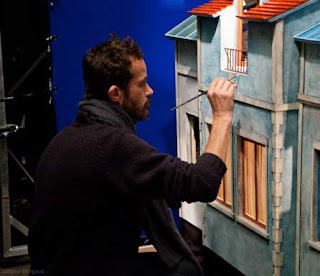 The minimalist and handcrafted sets were hand-painted by the director and his crew. The art direction, combined with the perfect editing, makes audiences glide evenly through the entire movie.

Without sugar coating, "My Life as a Zucchini" draws the spectator from the begging to the end. The story flows smoothly with continuity, good pace, and gratifying surprises.

Professional and non-professional child actors were cast to do the characters' voices to communicate their emotions realistically. The children were placed in an actual set to perform and interact with each other taping dialogs during the action. In the recording, their voices occasionally overlapped in purpose to make the soundtrack more realistic.

This original animated film is Switzerland’s official entry to the 2017 Academy Awards for best foreign-language film. It also qualifies in the category of a best-animated feature, with a high possibility of getting an Oscar nomination in both types. 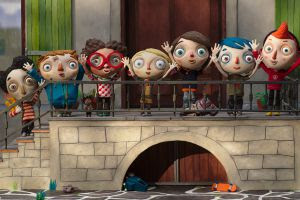 The film's saddest and happiest moment is when the children talk about adoption, helping them mature emotionally. As Simon says, “Adoptions with older kids happen rarely.” Children must be content with a simple goodbye and the sweetest memories of their good friendship.
“Zucchini” masterfully captured plenty of gratifying moments for the little ones and the grown-ups, created by the talented puppeteer.

Related Articles:
“The Biggest Little Farm” Transforms Land Into a “Farmville” Reality
Gunda: An Emotional Journey of Pigs, Chickens, and Cows
“Tigers Are Not Afraid” And the Lost Boys & Girls of Mexico
“ZOO” SAVING PRIVATE ELEPHANT
“LONG WAY NORTH” EMPOWERS “LITTLE WOMEN”
“Moomins on the Riviera” A Sophisticated Animated Feature with Social Satire
“KICKS” A BUNCH OF KIDS OF COLOR ROAMING IN SUBURBIA
“Güeros” A Lyrical Love Letter to Mexico City
The Painted Bird: In the Dawn of the Holocaust
Olga: The Ukrainian Who Represented Switzerland in Gymnastics
“Neruda” Runaway Poet
“Colossal” Not Your Typical “Godzilla” Movie