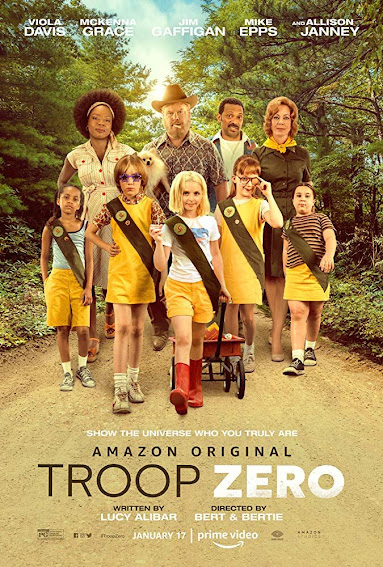 AFI FEST FILM REVIEW: “Troop Zero” is one of the most refreshing movies of the year. An unforgettable underdog children’s adventure based on real-life events captivating audiences on Amazon Original - Prime Video.

In 1977, NASA sent two Gold Records to space with “The Sounds of the Earth” inside the Voyager spacecraft. NASA invited children from all over the world to record a greeting in their native language.

The National Aeronautics and Space Administration commissioned a small town in Georgia to represent the country. Local children team up to compete for a slot in the recording.

In there, we meet Christmas Flint, performed by young and talented Mckenna Grace (“Gifted,” “How to Be a Latin Lover”). Her mother's absence makes the young dreamer feel that someone out there in space is listening.

To reach her goal, Christmas recruits a group of misfit Birdie Scouts to compete against other “normal” groups.
The purpose is to earn the most “merit badges” to succeed in the mission.

Participating in those trials will bring children together and leave them fond lasting memories of their experience.

According to the directors Bert & Bertie, this vibrant and colorful film took two months of preparation and thirty-two days of shooting.

After reading the script, they were inspired to work on the original story of “the voice recording to space set in the 1970s,” something they considered meaningful because unconventional children were involved.

Bert & Bertie collaborated closely with screenwriter Lucy Alibar, who also wrote: “Beasts of the Southern Wild” in 2012. Miss Alibar mentioned that she was open to suggestions and letting the actors collaborate during rehearsals.

In terms of creating such “diverse” characters, she said that “they never put colors on them.” They only knew that they had to be racially mixed. Alibar also mentions she was inspired by her close friends: “They are so cool and different.”

The filmmakers said staging the dance scene was the most challenging part.

Having two Academy award winner actresses in the cast, Allison Janney (“I, Tonya”), and Viola Davis (“Fences”), made the young actors feel star-struck. But as soon they started working together with the celebrities, the youngsters gained the necessary confidence to act at their level. The young actors’ performances are authentic and praiseworthy.

The audience may feel that the action of this “brat pack” movie takes too long to take off, but in the end, “Troop Zero” is a rewarding movie to watch.

Other successful films that empower children and embrace the much-needed diversity in Hollywood are “Napoleon Dynamite,” “Little Miss Sunshine,” “And hunting for the Wilderpeople.” These movies also portrayed adults and children in their unique and fantastic worlds.
The film teaches us that winning is not that important. What matters is to embrace our differences, accept each other the way we are, and gain confidence by participating in something larger than life that leads to personal gratification.

“Troop Zero” is simple, but its freshness and lively characters exceed expectations making the audience enjoy the ride to the end and beyond.

Troop Zero - Official Trailer
Related Articles:
I Lost My Body; I Found An Animated Masterpiece
“My Life as a Zucchini” The Animated Life of a Swiss Boy

“Moomins on the Riviera,” An Animated Feature with Social Satire
“LONG WAY NORTH” EMPOWERS “LITTLE WOMEN”
“The Biggest Little Farm” Transforms Land Into a “Farmville” Reality
“ZOO” SAVING PRIVATE ELEPHANT
“Hunt for the Wilderpeople” Is the Funniest Manhunt Movie Ever
“Jurassic World: The Fallen Kingdom” “Honey I Blew Up the Dino.”
“Barry” And “The Wonder Years” Of Barack Obama
“Les Misérables” Boyz n the French Hood
“Tigers Are Not Afraid” And the Lost Boys & Girls of Mexico
“Güeros” A Lyrical Love Letter to Mexico City
“GOAT” WHITE BOYS DO CRY
“KICKS” A BUNCH OF KIDS OF COLOR ROAMING IN SUBURBIA
“The Art of Self-Defense” – Can Karate Cure Loneliness?


IF YOU ARE READING FROM A MOBILE DEVICE, CLICK: view web version FOR OTHER COOL FEATURES SUCH AS TRANSLATE POWERED BY GOOGLE, AN INTERACTIVE FILM FESTIVAL CALENDAR, AND MORE.