Fire of Love: The Everlasting Stars of Volcanology 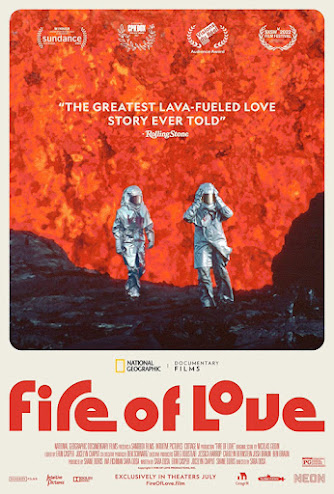 Dangerously real, “Fire of Love” ignites the lover’s passion for Earth Studies 101 enormously. This Academy award-nominee documentary can be used to save lives in communities surrounding volcanoes around the globe.

“Fire of Love” is a complete recompilation of transcendental materials related to volcano studies collected deep from the archives of Katia & Maurice Krafft. The French couple discovered their magnetism for each other and volcanoes. Attracted by the powerful energy emanating from the Earth’s interior, they defied nature to fulfill their hunger for knowledge.

The daredevils of volcanoes are here to enlighten humanity with their amusing discoveries and heart-pounding missions, leaving us with an everlasting legacy.

Before 1966 all we knew about volcanoes was generic. The geology classified volcanoes by region, age, and size - until the Kraffts came with their exhaustive research studying every volcano individually. 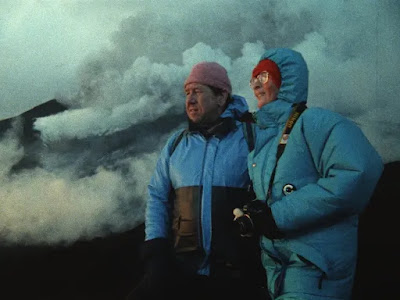 Since they met in a coffee shop in Paris, the French couple could not live apart and embarked on a series of expeditions overseas to study each volcano individually. When they were children, their parents took them separately to visit the volcanoes in Italy – they started with the Stromboli.

In 1970 they married. Their honeymoon was in Santorini, the mythical city of Atlantis. They devoted their lives to their volcano studies and decided not to have children. The newlyweds were the first and probably the only volcanologist couple in the world, which revolutionized every previous theory about the volcanoes and the tectonic plates.

In the film, once they started their journey, the visuals and environmental sounds blended, complementing everything with “Je Me Sens Vivre,” a romantic French song by Dalida.

They brought down every theory and every myth about volcanoes, even the truths and fragments of history already set in books. As they went more profound when more questions arose. They traveled to different countries, continents, and Islands, starting with Mt. Edna and the Stromboli in Italy to begin their investigation. They knew that every mystery had to be solved. They lived every new adventure to its fullest.

TV appearances witnessed their studies, and it was an excellent opportunity to let the world know that studying volcanos must be done individually, not as a generic classification. Every volcano is a different animal. And they were more excited to show their findings when the TV became color. 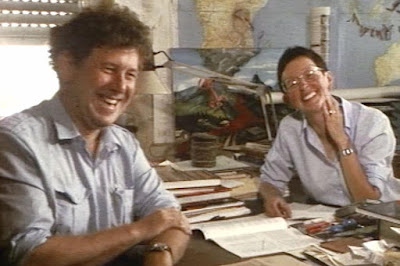 They had their strength - Katia worked on still pictures, printing books, chemistry, soil composition, gases, and physics. Maurice filmed everything on location, including eruptions, keeping the records and archives in order.

Both complemented each other exceptionally well. The closer they get to the volcanos, the more they see and become volcano runners. Even local people helped them with supplies and guidance to reach the craters.

Contemplating the devastating landscape surrounding a volcano, Maurice and Katia stated, “We are not religious, we are scientists, but we have our short life to return to the ground.” They romanticized their job following their passion for volcanoes and each other. Katia observed 170 volcanos, Maurice 150, 20 less than her.

Maurice prefers an intense and short life to a monotonous, long one. In his existentialist philosophy, he feels that his life is a kamikaze existence in the beauty of volcanic things, together with the strenuous sounds of the volcano explosions.

They came out with a new classification theory for volcanos, Red and Grey. They named Red Volcanoes because of their red magma and moving plates underneath, and Grey Volcanoes after the grey smoke and ashes. They produce the most fertile soil for plant and vegetable growth. But these were the more explosive, the monster volcanos, the killer volcanos such as Mount St. Helens in the US near Vancouver, Canada. 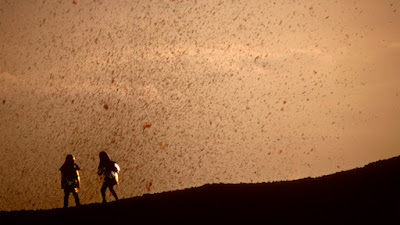 “Volcanology is a science of observation. The closer they get, the more they see.” With new gear, they could get closer to the edge. In their fascination for danger, the unknown is not to be feared, but something is not torn. When the Krakatoa erupted in Indonesia in 1971, they studied chemistry and water composition, the acidity that kills every living organism surrounding the volcanoes. In 1973 they visited one of the most active volcanoes in the world. Mt. Nyiragongo in Zaire, now the Democratic Republic of Congo, to continue the studies of lava and soil composition.

The signs before a blast are the alteration of minerals, gases, soil temperature, and tremors that ignite an eruption, but there is no certainty to know when or at what time. “Going to the site of a volcano eruption is like playing Russian roulette - you never know when you will be killed,” said Maurice. 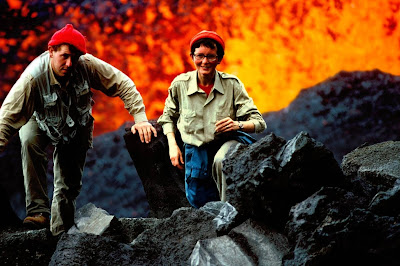 In 1985, the eruption of the volcano Nevado del Ruíz in Colombia killed around 25,000 people while sleeping. The government ignored those warnings for evacuation, and Katia arrived to testify about the damage. Since then, the Kraffts’ film has been used as educational material to warn the communities close to the volcanos to evacuate and save lives because timing is everything.

The narration by independent filmmaker Miranda July (“Kajillionaire,” “Me You and Everyone We Know,” “The Future”) is descriptive and evocative.
The documentary, co-written and directed by Sara Dosa (producer of the Academy nominee documentary “The Edge of Democracy”), is a powerful image of the well-selected material. Dosa did a marvelous job placing together this gigantic puzzle on the Krafft's materials, studies, and discoveries.

Legendary German filmmaker Werner Herzog worked on a couple of projects focused on the Kraffts - “The Fire Within” and “Into the Inferno.” Still, nothing compares with the force that “Fire of Love” has through imagery and consistent structure.

The material selected can compare with the fabric of other Academy Award-winning music discoveries, “Summer of Soul” or the story of “Amy” on the life of Amy Winehouse, where the home videos are sticking material for the world to connect with the legendary singer.

What keeps us watching the documentary is the fantastic material and the lives of those two passionate French investigators who pursue their dreams and dare, like no one else, to go further. Katia, Maurice, and the volcanos love story.

Related Articles:
THE WORLD’S BEST FILM FESTIVAL POSTERS 2022
The Cave: An Underground “Elysium” for Children in Syria
“Honeyland” The Last Beekeeper of Macedonia
“The Silence of Others” Speaks Up Amnesiacs in Spain
The Mole Agent: No “Mission Impossible” for a 90-Year-Old Chilean Detective
The Great Hack Faces Up To Ethics and Technology
The Biggest Little Farm; Transforms Land Into a “Farmville” Reality
Laura Pausini: Pleased to Meet You, Recounts the Life of the Italian Megastar
Summer of Soul: The Music Fest that Gave Freedom to Thousands
Under the Volcano: The Golden Era of a Recording Studio in the Caribbean
Amy, The Brief Existence of A Shining Star
WOMEN, HE’S UNDRESSED: FASHION AND GLAMOUR
Dear Basketball: Kobe Bryant’s Inspiring Love Letter to Posterity

DANCER” THE UKRAINIAN BILLY ELLIOT OF ‘TAKE ME TO CHURCH

A Fantastic Woman Love, Grief, and Compassion in Santiago