Llyn Foulkes One Man Band: The Passion of an Artist Never Ends 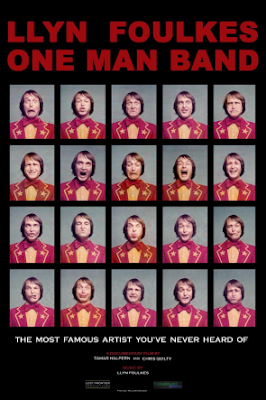 A highly entertaining and fascinating documentary about the life of an artist that will make you addictive to good cinema.

Llyn Foulkes is the most famous artist, musician, composer, and painter you’ve never heard of. Well, now it is time for you to know who this person is who deserves his life and body of work put on a film.

The film documents seven years of the life of Foulkes, the creation of two large paintings that he builds, cuts, destroys, recycles, and builds back again, over and over, until he feels his paintings are 99% finished, then he said: “The painting is done when it is done." Full of passion, he adds: "I can't just finish it. The only way it's finished is when they take it away from me.”

Interestingly enough, his rebel and obsessive personality has the need to express himself with concepts of love, life, and hate.

He moves around the passion he feels for his artwork and how he transforms everything he touches into a form, shape, shadow and tones, with dimensions to give the right depth to his creations.

With his work, he ignites controversy, using elements of pop culture such as Mickey Mouse heads, real dead cats, and a fetus to an organic composition.

He is so absorbed by his work that his private life gets upside down from the imminent divorce and being away from his daughter. All those emotions affect him so much and placed them in his creations.

As a one-man band musician, he’s working in what he calls “The Machine,” a huge musical instrument he invented years ago to perform in a solo show. That same music Foulkes plays in this documentary, just to entertains us.

The documentary is directed by Tamar Halpern and Chris Quilty and features: Johnny Carson, Dennis Hopper and George Herms, among other celebrities who are well known for buying fine art, but you need to see the end to find out who got his hands on the two controversial masterpieces.

Check out “Llyn Foulkes One Man Band” to find out why he got discovered at the age of 77.  His work exhibited two years ago at Hammer Museum of Los Angeles and it was a huge success.

“Llyn Foulkes One Man Band” was part of the official selection of the Los Angeles Film Festival 2013, and now it's time for us to enjoy it at some of the independent movie theaters near you.

“Llyn Foulkes One Man Band” is a documentary with soul and good music, marvelous paintings, and above all… pop-art.

TO ACCESS OUR INTERACTIVE FILM FESTIVAL CALENDAR FROM YOUR MOBILE DEVICE, CLICK: View web version.
Festival in LA ©2014
Posted by Festival in LA at Friday, May 16, 2014