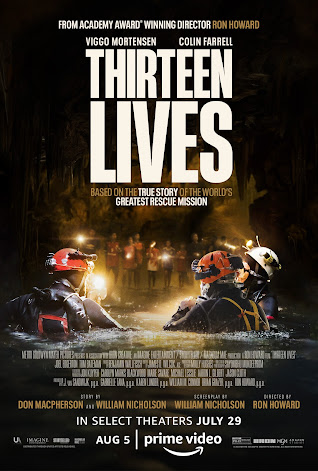 “Thirteen Lives” is a compelling survival drama that keeps the tension from beginning to end - a triumph of the human spirit!

This new Hollywood production directed by Ron Howard is a thrilling roller-coaster with a faithful reconstruction of one of the most dramatic rescues in Thailand’s history. The mission was to save the lives of twelve young soccer players and their coach, impacted by their actions and the forces of nature that trapped them inside the caves.

As we dive into the story, the junior soccer players enjoy their game under the overcast afternoon, a prelude to the events awaiting the youngsters. Once they finished the game, they wanted to go out and celebrate one of the kids' birthdays - their destination, the Tham Luang caves, northern Thailand.

What seems an innocent adventure for the soccer players soon becomes an unsettling tragedy for an entire community. Without warning, the Monsoon season thunders the land with diluvian rains, trapping the children kilometers inside the caves. 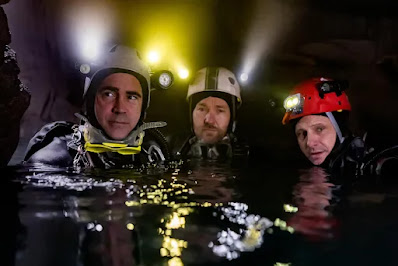 Subsequently, Thailand’s National Guard was tasked with effecting a rescue. After several attempts, their mission could not dive into the caves any further to reach the children, given how their lives would also be at risk. At this point, messages of desperation went out to the international community.

Ron Howard, the director of “Apollo 13,” efficiently managed to push the emotions to the limit, regardless of the intentional disassociation with the Thai children. The filmmaker only showed brief moments of the children’s lives, then focused on divers.

In the film, the absence of the children raises tension. Consequently, the film would have benefited from letting the audience know more about developments in the narrative -- the children: who are they? What are their dreams, desires, and hopes? The audience likes to learn more about the parents, culture, education, and passion for soccer. The film paints an insufficient portrait of the local characters as the drama unfolds.

In the public’s memory, the children trapped in the caves in Thailand are still fresh - the rescue happened in 2018. In this Amazon Prime Video production, the introduction runs away from the children too quickly, then focuses on the British divers, committing significant omissions; what about the rescue teams from other nations who played a critical part in the “collective” mission? Australia, Japan, Germany, and Switzerland.

Faith is a higher power in every country. In this particular case, international solidarity was evident. The Hollywood production focuses on the actions led by the British rescuers and moves away from everyone else.

On the same subject, the Netflix series “Thai Cave Rescue” chronicles the mission to save those kids. And the vivid National Geographic documentary by Oscar-winning directors Jimmy Chin and his wife Elizabeth Chai, “The Rescue,” focuses on the logistics and the international team tirelessly working to save those precious lives. Both projects deeply researched the Tham Luang caves event, showing what “Thirteen Lives” failed to offer the rescue teams from more than twenty countries. 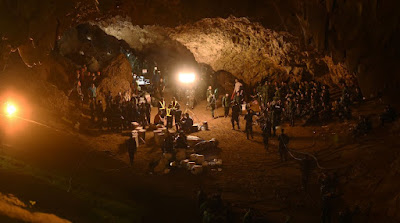 The capital used in the rescue mission was colossal; the numbers don’t lie. The production of “Thirteen Lives” did not show the enormous amount of human and mechanical resources used to save those children’s lives: 100 divers, 900 police officers, 2,000 soldiers, ten police helicopters, seven ambulances, and more than 700 diving cylinders. The volunteers and technical specialists came from Australia, the USA, Denmark, Israel, Germany, the Philippines, Singapore, Spain, Sweden, and Ukraine.

The responsibility of filming inside the caves underwater fell to the experienced Thai cinematographer Sayombhu Mukdeeprom. He previously worked in Thailand’s Palme d’Or winner mystical dark fable “Uncle Boonmee Who Can Recall His Past Lives” and in the luminous Italian production “Call Me by Your Name.” The camera setups in the scenes filmed underwater in a limited space were complex, with fascinating results.

Hollywood history has plenty of “survivor movies,” although since the 1970s, those films have become more popular. The popular projects showing the victims’ journey and people’s struggle to survive to begin with “Towering Inferno,” “Poseidon,” “Survive! /Supervivientes de Los Andes,” and even “Titanic.”

Other more recent survivor epics include “The Impossible,” directed by J.A. Bayona (“The Orphanage/El Orfanato,” “Jurassic World: Fallen Kingdom”), which is also set in Thailand during the 2004 Indian Tsunami. “The 33,” directed by Patricia Riggen (“Under the Same Moon”), is a movie led by Antonio Banderas and Juliette Binoche chronicling the story of the copper miners trapped in Chile who survived thanks to the international effort.

As Ron Howard failed to show the local and international community working in the rescue by giving more screen time to the British divers, Clint Eastwood commits a similar cultural omission in “Richard Jewell.” The film diminishes and washes out the historical festivities of the international community in Atlanta’s Olympic Games of 1996 and the terrorist attack to showcase a mere courtroom drama.

The tragedy of the Boston Marathon on “Patriots Day” disbands most participants and ignores the public, visitors, Bostonians, and even the real heroes who helped the wounded at the finish line. Ultimately, the film failed to show what happened on that fateful day because Hollywood’s Star System focuses on the lead, in this case, Mark Wahlberg, who matters more than the authentic recreation of the events.

Hollywood’s most awkward issue always has been ignoring the vast diversity of our communities. In contrast, the Norwegian film “Otoya: July 22” never loses its sense of community. Neither the Mexican drama “Canoa, A Shameful Memory.” And the unmerciful representation of the ethnic cleansing in Bosnia and Herzegovina in the Oscar nominee production “Quo Vadis, Aida?”

“Thirteen Lives” has a couple of overwhelming flashes that melt our hearts, mostly when we finally see the divers reaching the children. Still, the artificial recreation of those moments entertains the masses, choosing not to show a piece of reality or to construct a historical document that can feel relevant to future generations.