Desde Allá: Confronts the Macho Stereotypes of Latin-America with Hyper-realism 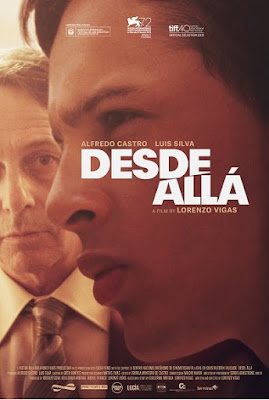 The macho stereotypes of Latino men had never been shown so vividly and so questionable in a movie, until “From Afar” or “Desde allá” came into the game.

“From Afar” is a sensual risqué and sexually divergent. A hyper-realistic motion picture that illustrates how raw and volatile is sexual life of Latin men.
The winner of the Golden Lion at the Venice Film Festival had a sold-out screening at the AFI FEST 2015 in Los Angeles, where we met the visionary director Lorenzo Vigas.
Vigas' his first work is masterful and very realistic. He takes us on a trip inside the box of the conglomerated geography of Caracas - showing the massive contrast between the affluent areas and the slums of the city, where young men steal, do drugs, and beat themselves to death - while the rich pass by indifferently.


The interesting camera-work shows the city as crude and depressing as possible, including its social differences and contrasting environments.

The action starts with the fetishism and the sexual deviations of an uneasy middle-aged, dentures artisan named Armando, marvelously portrayed by the renowned Chilean actor Alfredo Castro (“Tony Manero,” “The Clan,” “Neruda,” “No”).

Alfredo Castro is one of the most best actors in Latin-America, his performance is immaculate.


Elder has all the characteristics of the traditional macho tough Latino man with nothing to lose, but the need for money leads him to prostitution because of his economic condition. 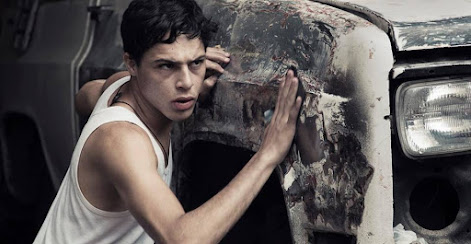 Silva imprints liveliness, impetuosity, sensuality, and fresh air to the film.
The natural obsessions and social prejudices will severely affect the newly made relationship.

The tension builds way up at Elder's sister's Quinceañera when he and Armando show up elegantly dressed up for the "Barrio's" celebration.


Elder, naively, doesn't know how to show his gratitude. After a few drinks, he expresses his feelings in public for his benefactor, becoming a new world of discovery and contradictions.
Homophobia rules the streets, and people see the same gender love is treacherous.
In the bedroom, they struggle to become intimate. The mystery breaks the enchantment when the couple has sex for the first time.
Armando is obsessed with viewing naked men, but he cannot relate to anyone physically and places emotional barriers on the people who rare for him.
Elder is impulsive and uses his body to express gratitude and contempt intensively.

“Desde allá,” accurately and seamlessly, handles the universal themes as loneliness, lack of communication, and fear to express emotions, a paradigm of our times.
The intricate screenplay is written by the Award winner Mexican screenwriter Guillermo Arriaga ("Babel," and "The Burning Plain"), and it is based on an original story by Lorenzo Vigas. 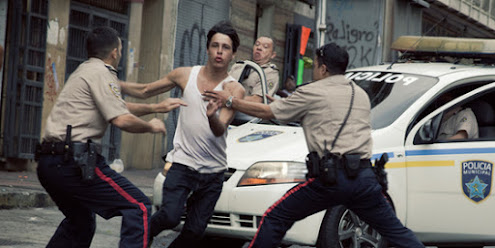 The style of hyper-realistic filmmaking in "Desde Allá" is strident and exposes the characters in focus, blurring backgrounds, washing the colors out, and producing a closer connection between the actors and the audience.

The new fearless filmmakers pouring from Latin America are revolutionizing how the story is told on the big screen. Many pf those hyper-realistic movies maximize the artistic value and lower the production cost. 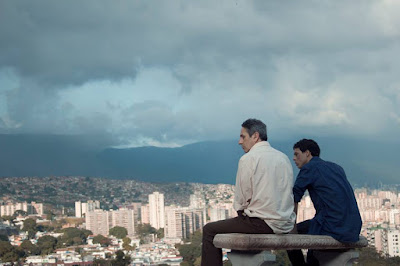 “Desde allá” flows with authenticity and realism. It shows the complexity of the characters with humanism. It expands the cultural horizons of the viewers who may think, in this day and age, that to love another person from the same genre is insane, immoral, and is some countries, a crime.
This Venezuelan film raises so many questions: How much homophobia and prejudices affects a person's growth? Why are so many stigmas, discrimination, and stereotypes affect our society? How far can you go for someone you love? How would you love a person "from afar" if you are so close and so afraid to be in love?
After the horrific attack in Orlando on the LGBTQ community, the timing of this movie from Venezuela couldn’t be any better because “Desde allá” puts the finger in the wound.

Related Articles:
“A Fantastic Woman” Love, Grief, and Compassion in Santiago
The Mole Agent: No “Mission Impossible” for a 90-Year-Old Chilean Private Detective
Two of Us: Juliette & Juliette of Montpellier
Tove: Bounded by Art, Love and The “Moomins”
“In the Fade” “Revanche” in Hamburg
“The Square” An “Exit Through the Gift Shop”
25 Great Foreign Films that Did Not Get Distribution in US Theaters
“Cezanne and I” An Extraordinary Journey of Art and Friendship
“Elle” The New “Basic Instinct” with a “French Twist”
“My Life as a Zucchini” The Beautiful Animated Life of a Little Swiss Boy
“KICKS” A BUNCH OF KIDS OF COLOR ROAMING IN SUBURBIA
“Güeros” A Lyrical Love Letter to Mexico City
“Neruda” Runaway Poet
“Colossal” Not Your Typical “Godzilla” Movie
20 BEST GAEL GARCIA BERNAL MOVIES
The World's Best Female Lead Singer Movies