Violette: When Women Dare to Write 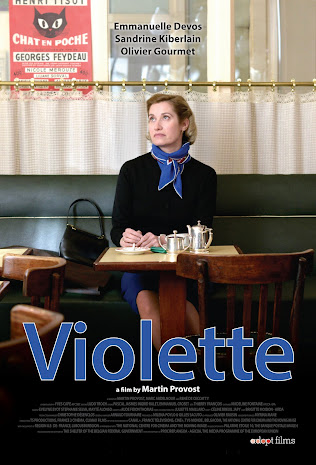 “Violette” is a majestic trip into the life of the passionate French writer Violette Leduc, an infatuated woman who forever changed the literature world. The insightful biopic is told with elegance, enlightenment, and beauty.
Violette Leduc was bold enough to dare to tell stories about women’s intimate desires in a poetic form at the end of WW II.

As Sor Juana Ines de la Cruz did centuries ago in Mexico, Violette takes her frustrations, complexes, and low self-esteem into her writings.

Her dreams separate from her body - chased by the ghost of her past, feels regrets for the love she couldn’t have.

Every rejection is an excuse to evoke the magic of her prose - bursting intense emotions and clear thoughts on her papers.

A few years passed after World War II ended. Food and goods are still in high demand. Violette dares to go out to the black market and look for supplies. She and her abusive husband don’t make a happy couple - it was a fixed marriage.

He’s a man with nothing to live for. She is a survivor, and he needs a reader, and she needs to express herself in writing.

Violette’s troubled childhood - their father abandoned her, and her mother neglected her. The elements that made her feel like a “bastard” will stand out later in her works.

Desperate for love, she must keep her emotions and memories in writing.

The poetry sets in motion. First, Violette has to learn to love herself a little.

After separating from her “husband,” in her grimy new place in Paris, her mother will tell her: “The war is over, and you are still living like you are a thief.”

The first line she wrote was powerful: “My mother never held my hand.” It is how her book “In the Prison of her Skin” starts.


Violette is always falling for the wrong men and crazy women. She is obsessed with them, begging for love.
Beautifully shot, the film’s polished scenery, locations, interiors, and props are outstanding.

“Violette’s” cinematography is minimalist, and it moves accordingly to the character’s emotions:

For example, when Violette is searching for love, everything is dark, grim, obscure, and detrimental. When she writes, everything is full of light with warm colors, open windows, landscapes, trees, flowers, water, and life.


Sometimes, she becomes a mere spectator of her own story, bringing back memories that inspired her books.
Simone de Beauvoir (Sandrine Kiberlain), the polemic writer who has written a story about a ménage a trois, will be the most influential person in Violette’s life, her muse, and spiritual love.

Simone is a hard-core feminist who thinks: “Marriage is an imposition, and for most women, it’s slavery.” She adds: “Women will never be free without economic freedom, and there is a long way to go.”

Simone’s rejection will be a significant turning point in Violette’s story, with a payoff later in the film.

The actress Emmanuelle Devos (“A Christmas Tale,” “Kings & Queen”) does an impeccable performance as poor little Violette. Her character is as obsessive as the painter “Séraphine.” Violette has to learn to write from the pain deep in her soul, and the painter knows to paint from the pain in her body.

Both extraordinary films about women were made by visionary director Martin Provost. Both have similar emotions and perfect depictions of female characters at different historical times.

“You don’t love me because I am ugly,” Violette says. “Screaming and sobbing won’t get you anywhere; writing will,” Simone replies.

Time passes, and she is constantly alone - “C’est moi Violette?” The eroticism in her books will soon find followers and detractors.

Now, thanks to historians and this film, we can remember some of the precursors of the women’s movement of the 1960s.

With women like Violette and Simone, the laws in France (and other countries) changed, giving the “second sex” the right to work, drive, make decisions, be equal, and be accessible for generations to come.

There are several films about female writers that transcend film history: “Reaching for the Moon,” “Henry and June,” “Miss Parker and the Vicious Circle,” “My Brilliant Career,” “Gaby: A True Story,” “Becoming Jane,” “Leonie,” “Sylvia,” “Julia,” “Miss Potter,” among others.

What fascinates me more about “Violette” is the character’s arc. From her introduction in the beginning and how much she will grow at the end. She gains confidence and self-respect so subtly that it makes us feel good about it.
“Violette” is the perfect combination of all the elements that compose an outstanding film – acting, directing, cinematography, writing, and music.

The audience raved for “Violette” at the Los Angeles Film Festival to a standing ovation. Now, you must decide if you will reject or let “Violette” seduce you with her life in writing.