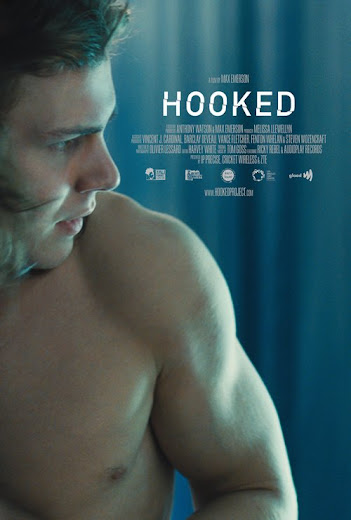 “Hooked” is a compelling, eye-opening work of fiction that awakens the consciousness of the homeless problem of our unprotected youth in America.

This gay drama mirrors our modern-day society and chronicles the untried days of Jack (Conor Donnally).

Besides performing semi-naked with his guitar on the streets of New York, the free-spirited young hustler also gains a few extra bucks doing tricks with men and women. 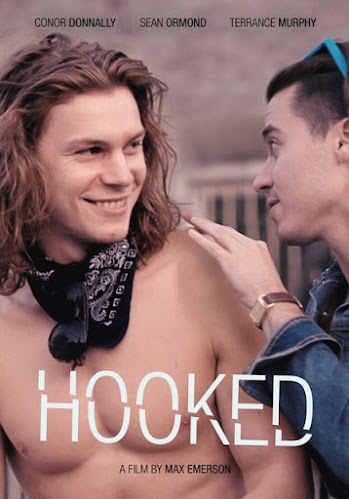 He also enjoys playing pranks on the streets with his supportive and naïve boyfriend Tom (Sean Ormond), a penniless aspirant photographer.

In search of their own identity, they plan to move out of the shelter to a place of their own and live happily ever after. They discover that life is not a fairy tale as the days pass.

Jack has promised not to get “Hooked” on drugs until his 18th birthday, but it's tough for kids at this age to keep those promises alive, mainly when his birthday is around the corner.

Meanwhile, Ken, a mature, religious, but confused film producer – played by Terrence Murphy – wants to go out and have fun with guys while his wife has to take care of their baby at home.
Resembling the gay version of “Pretty Woman,” Jack and Ken meet for dinner in an expensive restaurant. Quickly, Ken invites “the boy” on a trip to his penthouse in Miami, something Jack had never dreamed of.

Jack is ambitious and territorial with the people that care about him. Triggered by jealousy, he decides to go out to the treacherous streets of Florida to continue his life of drugs and prostitution. Life can be harsh for people at a young age.

This film reveals Jack’s enormous need for belonging as he cries out loud to be accepted, loved, and respected. Redemption may be on its way.


Actor Conor Donnally is a revelation – the camera loves him. He articulates Jack’s emotions with perfect body language – At the same time, he can show happiness and internal pain.
Applauding this unique, character-driven first project as writer/director Max Emerson (“Eastsiders,” “Hit the Floor,” and the “Glee” TV Series) took his celebrity status to crowd-funding a film that focuses on LGBTQ youth matters.

With some clichés and unrealistic situations, this film could be frustrating for some viewers, making them wonder if people act this way in real life. But the actors do a compelling job pulling off a complicated subject matter.

In America, LGBT young people are eight times more likely to be homeless. Those kids are twice as likely to be sexually abused, develop a severe drug addiction, or even commit suicide.

The producers will donate 50% of the proceeds to not-for-profit organizations helping troubled young people.

For more information on how you can help, give, volunteer, or become a foster parent, please visit:
www.Hookedproject.com

Related Articles:
Hashtag #OscarsSoFabulous
Bohemian Rhapsody is Getting an Early Oscar© Buzz
“A Fantastic Woman” Love, Grief, and Compassion in Santiago
SEVEN GREAT FOREIGN FILMS SHOWCASED AT AFI FEST 2017
“Endless Poetry” The Atypical Universe of Alejandro Jodorowsky
“WOMEN HE’S UNDRESSED” FASHION AND GLAMOUR IN THE TIME OF THE GOLDEN AGE OF HOLLYWOOD
Festival in LA ©2018
Posted by Festival in LA at Friday, June 22, 2018