Guadalajara in LA 2016 Closes with The “Tree of Life” Awards 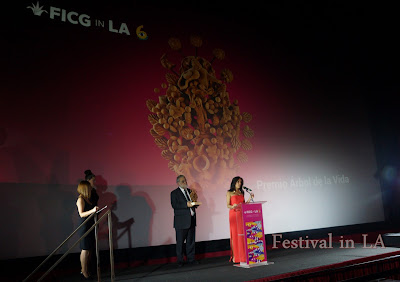 The first award of the night went to the late producer Donald K. Ranvaud. His work includes magnificent pieces such as “Farewell My Concubine,” “Central Station,” “City of God,” “The Constant Gardener,” “Cobrador: In God We Trust,” “Rolling Family,” “Madame Satä,” “Lower City.”
The second award went to the Academy award nominee, late director Héctor Babenco (1946-2016). Born in Mar del Plata made his career in Brazil.
Babenco's legacy is constituted for great iconic films such as “Kiss of the Spider Woman,” “Carandidu,” “The Past/El Pasado,” and “Pixote.” His last work “My Hindu Friend,” was screened during the festival.


His daughter received the award in the name of Héctor Babenco.


﻿﻿And the third award went to the talented Brazilian actress Alice Braga (“City of God,” “Lower City,” “Only God Knows,” “I am legend”).
﻿﻿
After the awards, the festival had a screening of “Me estás matando, Susana/You are Killing Me, Susana,” directed by Roberto Sneider (“Two Crimes,” “Tear This Heart Out/Arráncame la vida”). This comedy has Gael Garcia Bernal in the lead role, Verónica Echegui, and Ashley Grace. The film pleased the audience of a packed house.
FICG in LA, in its sixth edition, continued showcasing outstanding films from Latin-America and celebrated the recognition to the life of actors, filmmakers, and prominent members of the Los Angeles artistic community, and promoted the cultural liaisons between Latinos in Hollywood.﻿