ALL THE CREATURES WERE STIRRING: WISHES YOU A BLOODY MERRY CHRISTMAS

“All the Creatures Were Stirring” is a very Lynchian movie with some touches of good humor and plenty of scary moments.
Seasonal vignettes were well-combined and smartly put together by a group of remarkable filmmakers, plus exceptional performers.

When a blind date goes wrong, the atmosphere of this tiny, little creepy theater plays a series of obscure and bizarre tales by a group of funky performers.
From the beginning, the couple’s interaction with the workers and patrons is awkwardly funny.

A mute presenter introduces every story when they sit to enjoy the show. She has the look of a character in David Lynch’s movies.
The stories are rich and fascinating. It begins with a mind-numbing Christmas office party that turns into a bloody Russian roulette game.

A late-shopping madness ends up in a psycho “Chupacabras” eating people in the parking lot. A not-so-good neighbor’s experience transforms into a twisted version of Charles Dickens’s “Christmas Carol.” A dead deer avenges itself. Finally, a surreal extraterrestrial adventure at a friend’s dinner table gives closeness and hope to another couple.
“All the Creatures Were Stirring” is a creepy, weird, and even frightening anthology, and at the same time, it is fun to watch. 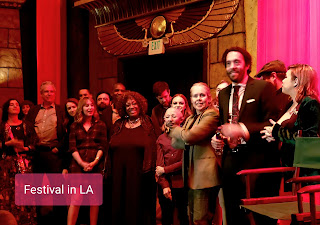 This independent horror flick is reminiscent of the TV Series “Tales from the Crypt.” A show from the 1980’s that I loved as a teen.

The cast and crew were present at the movie premiere in La Vista Theater of Hollywood.

ALL THE CREATURES WERE STIRRING Official Trailer (2018)

The Best Movies of 2018 - Festival in LA
“Roma” An Unprecedented Best Picture Nomination for a Movie in Spanish
“The Silence of Others” Speaks Up in Amnesiac Spain
“A Fantastic Woman” Love, Grief, and Compassion in Santiago
“Shoplifters” The Universal Language of Stealing
BERNARDO BERTOLUCCI ICONIC DIRECTOR OF WORLD CINEMA DIES AT 77
THE BEST FILM FESTIVAL POSTERS OF 2018
The Best Latina-Theme Movies in America
Latinas Tackle the “Latinx Issue” in Hollywood
Hashtag #OscarsSoFabulous
Roma and Ten New Mexican Trailers