Anna and the Apocalypse: Zombieland in a High School Musical

By José Alberto Hermosillo
“Anna and the Apocalypse” is an extraordinary, underground teen's horror/musical with sensational dark humor. An instant cult classic!!!

When British co-writer Ryan McHenry worked in the seventeen-minute short film “Zombie Musical,” he never imagined a few years later, it will turn into a coming-of-age, high school musical “Anna and the Apocalypse.”

The director of this terrific film is the young and talented John McPhail, who placed all the elements together to make this fun-to-watch, vibrant flick. "Anna and the Apocalypse" appeals to a new generation of film-goers.

To upgrade the short into a feature film, they added a few more novelty elements and characters making the story more vivid and fluidly entertaining.

They shot the movie in twenty-eight days, averaging a record of seventeen sets a day in a non-sequential order.
At that time of the year in England, the weather conditions were challenging. During the production, the filmmakers had plenty of rain, wind, fog, and snow.

Having only six hours of daylight, they worked from dawn-to-dark. For that reason, pre-production was essential for the well-being of the film.

They also spent a week planning the climactic song “Hollywood Ending.”
During the shooting, director of photography Sara Deane always looked for that emotional beat to drag the viewer's attention to a focal point. Miss Deane created an electrifying and colorful world through her lenses. With the convenient help of the seasonal Christmas decorations made out of this zombie musical, a genre film worth watching.

She added that working in the hallways was more challenging because space was limited and harder to light.

"Anna and the Apocalypse" combined the zombie assaults with gaudy and well-choreographed musical numbers. 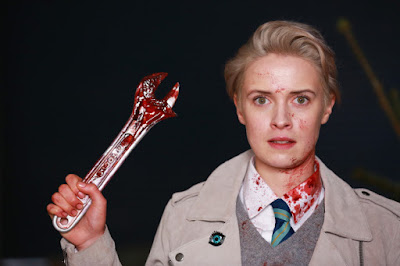 “Anna and the Apocalypse” is a provocative story within the Zombie Genre.

The filmmakers mixed the romantic comedy with horror to help break the structure - beginning with the desires, goals, and dreams of every character, and foreshadow the story's outcome. 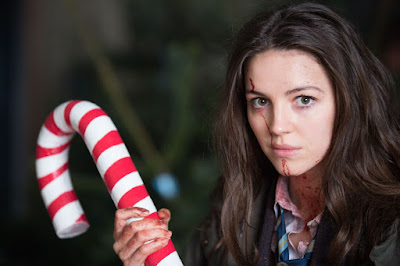 For the central characters, the loss of a good friend gives real meaning to fight the Zombies.

The representation of zombies becomes personal as the symbol of the undead, and depression-like Santa Claus is for happiness.
Director John McPhail wanted everyone in the film to feel real. He is a believer in character truthfulness.

McPhail firmly believes that actors are people, not kids. In the character's bios, he has to know where they are coming from and where they are going.

In McPhail's own words: “‘Jaws’ has the same structure of ‘Ghostbusters,’ and still are two different movies.”

He worked with three other composers who had never done a musical before. They were making sure they were on the same page and used a comparable terminology that included respect for everyone and everything - honor the female characters, respect the zombies, and the bullies too.

The memorable music includes the terrific songs “Christmas Means Nothing Without You,” “Break Away,” “Soldier at war,” “Turning My Life Around,” “What a Time to Be Alive,” "Human Voice," and, of course, “Hollywood Ending.”

This film is not for the British only. Even though it was made in England, “Anna and the Apocalypse” music is Universal. American and worldwide audiences can identify with the songs, the comedy, and the amazing dead and alive characters.

The magic of cinema comes when a movie like this appeals to everyone.

The director said, “The comedy has a sparkle, and it comes from something real.” He added, “What America has brought to Grand Britain, now we want to give back, like this pleasing and surprisingly original film.”
The new hard-core fans of this genre can rejoice to know that the stage version of “Anna and the Apocalypse” will be touring at theaters around the globe pretty soon. Enjoy!
"Anna and the Apocalypse" trailer
Related Articles:
The Academy Museum of Motion Pictures Opens at Last
Under the Volcano: The Golden Era of a Recording Studio in the Caribbean
Makeup & Hairstyling Symposium 2019
“Destroyer” Nicole Kidman Vs. Gangs of LA
“Ben is Back” So is Julia Roberts
“A Son of Man” Ecuador Center of “The New World”
“Roma” Anarchy and Repression in an Epic B&W Mexican Drama
“Shoplifters” The Universal Language of Stealing
THE BEST FILM FESTIVAL POSTERS OF 2018
The Best Latina-Theme Movies in America
BERNARDO BERTOLUCCI ICONIC DIES AT 77