“Big Love” For Polish Cinema ‘Punk is not Dead’ 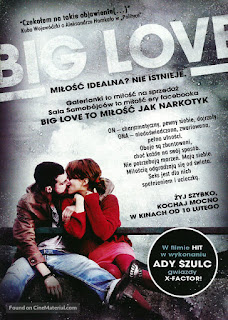 This nonlinear romance/crime story starts with a girl singing in a nightclub when a gunshot goes off. The police investigate.

Boy meets girl. She is a high school dropout with big dreams of going to the conservatory. A Jimmy Hendricks T-shirt tells us music is her passion. Her mother is a famous actress touring around the world. He is a young, tough guy that works in a lab, he used to drive for a band, but now the girl becomes his life obsessively.
“Big Love” flows seamless, in every scene, a new element enriching the story: a dog, a butterfly, a gun, a dream, and sex, lots of sex. The transitions between past and present are perfect. The intense sex scenes are beautifully shot, making the story look even more natural and exciting to watch.
The fantastic soundtrack is telling us that “punk is not dead” as some other great contemporary works about other “neo-punk” bands on the big screen such as: “We Are the Best” from Sweden/Denmark and “Somos Mary Pepa” from Mexico.
“Big Love” and “(500) Days of Summer” as well, remind us of "Poem 20" by the Nobel Prize winner Pablo Neruda “Love is so brief: forgetting lasts so long...”

What makes “Big Love” such a good movie, besides its excellent craft by a first time filmmaker Barbara Bialowas, and the beautiful performances of Aleksandra Hamkalo and Antoni Pawlicki (“Papusza”, “Lullaby”) is the well-told story of an unconventional, mad, toxic, and crazy love, as the theme song of the movie, that says: “Only Death is the Cure for Love.”

For the full program, visit: http://www.polishfilmla.org/wocms.php?siteID=9&lngID=1