“Never Look Away” is Germany's Entry for the 91st Academy Awards® 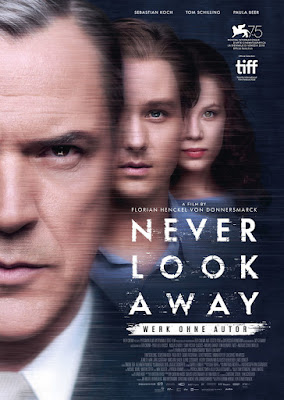 Based on the real life of the well-known abstract German painter Gerhard Richter, the film vividly recreates three significant eras in Germany’s history.

Directed by Florian Henckel von Donnersmarck, who already won an Oscar® in 2006 for “The Life of Others.” Ironically, it beat out Guillermo del Toro’s masterpiece “Pan’s Labyrinth.”

Mr. Donnersmarck came to Hollywood in 2010, to direct the French remake of “The Tourist” with Angelina Jolie and Johnny Depp. The 100 million dollar flick had locations in Paris and Venice and earned $278 million at the worldwide box office. This film plus the Oscar established him as a prestigious Director.

“Never Look Away” focuses on the early days of Kurt, a naïve young artist who falls in love with Ellie, the daughter of the famous Professor Karl Seeband, who strongly opposes the relationship.

They will discover their lives are already connected by a horrendous crime the “prestigious” doctor committed years earlier.
The Teutonic submission premieres at the 75th Venice International Film Festival. To meet the Academy’s requirement, the film is heading for a commercial run in Germany before September 30, 2018.
"Werk ohne Autor - Never Look Away" German trailer (HD)


Related Articles:
Roma and Ten New Mexican Trailers
“I Am Not a Witch” is the United Kingdom Selection for the 91st Academy Awards®
The Best Latina-Theme Movies in America
Latinas Tackle the "Latinx Issue" in Hollywood
The World's Best Female Lead Singer Movies
“A Fantastic Woman” Love, Grief, and Compassion in Santiago
“Endless Poetry” The Atypical Universe of Alejandro Jodorowsky
“Elle” The New “Basic Instinct” with a “French Twist”
“Neruda” Runaway Poet