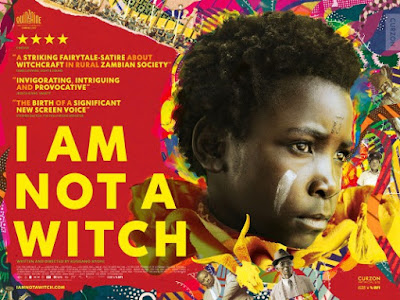 The United Kingdom has selected “I Am Not a Witch” to compete at the 91st Academy Awards® for Best Foreign Language Film.

The most celebrated British film of the year premiered at the Director’s Fortnight section of the 2017 Cannes Film Festival.

The team integrated by the director Rungano Nyoni and the producer Emili Morgan took the BAFTA Award for Outstanding Debut by a British Writer, Director or Producer.

In “I Am Not a Witch” people speak Bemba, the language of Northern Zambia. The film opened in the U.K. last October. Those are the two most essential elements to qualify for Best Foreign Language Film. Also, it began to show in Europe and in other territories.

The striking cinematography and the originality of the story has an approval rating of 100% on Rotten Tomatoes by critics and film specialist.

The highly-praised flick recounts the tale of Shula, an eight-year-old Zambian girl accused of witchcraft. After her trial, she is sent to a witch camp in the desert. During a ritual of initiation, Shula is instructed to follow the rules; otherwise, she will become a goat.

Other productions shot in Africa with similar storylines are the Oscar-nominated film “War Witch” from Canada, the Mauritanian-French coproduction “Timbuktu,” and the Netflix creation “Beast of No Nation.”

The United Kingdom submitted a film in the Foreign Language category for the first time in 1991. Since then, they had two Oscar nominations, the 1992 biopic “Hedd Wyn” and the 1999 “Solomon & Gaenor.”
Rungano Nyoni is a new visionary woman director. In her beautifully-crafted first film, “I Am Not a Witch,” she did a remarkable study of the millennial African cultures and their influence in modern day society.

I Am Not A Witch trailer.


“Never Look Away” is Germany's Entry for the 91st Academy Awards®


The Best Latina-Theme Movies in America


“A Fantastic Woman” Love, Grief, and Compassion in Santiago


“Elle” The New “Basic Instinct” with a “French Twist”