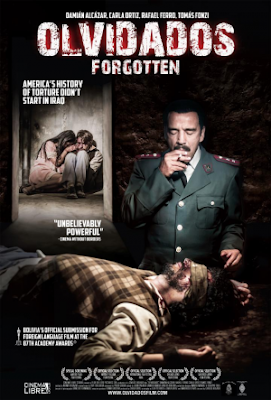 A well accomplished artistic composition with beautiful scenery, contrasting with the pain, remorse, and the human toll during the repression Era in Latin America named “Plan Condor.”

A story that has been censored for decades of forced silence now comes to light in a major motion picture.

“Olvidados” was the Bolivian submission for the 87th Academy® Awards for Best Foreign Film.


A phone call from New York to Bolivia triggers the flashbacks of a dying general. His turbulent past is haunting him - From his military training by the CIA to the Era of repression, abuse of power, torture, executions, and enforced disappearances that became a human tragedy in all South America during the 1970’s.


Those were the Golden years of the Cold War when the USA fought against the communist penetration of the Soviet Union in Latin America.


In the big picture, the US intentionally turned a blind eye to the dictatorial regimes which committed crimes against humanity in Bolivia, Chile, Peru, Argentina, Ecuador, Uruguay, and Brazil. These countries were fertile fields where such atrocities occurred.
The casualty counts were in the thousands.

The extraordinary reconstruction of settings of the Repression Era of "Los Olvidados" show in detail how these crimes were committed, the impunity and with no remorse, recreating perfectly the dark atmosphere of its mysterious past. 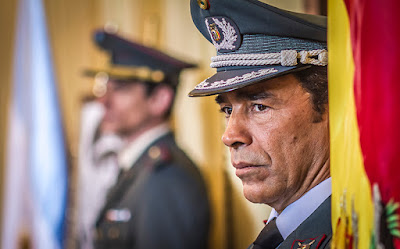 Damián Alcázar (“The Chronicles of Narnia: Prince Caspian”) is a chameleon actor who played the victim roles in films like: “Herod’s Law/La Ley de Herodes,” “El Infierno,” “The Perfect Dictatorship/La dictadura perfecta,” and now he plays the magnanimous General José Mendieta in “Olvidados.”


Damián Alcázar is terrific as the bad guy too.
Director Carlos Bolado (“Bajo California, el límite del tiempo,” “Tlatelolco, Verano de 68,” “Colosio, el asesinato”) managed to put together an artistic composition of beautiful images, great performances, but with lots of pain from the victims, the oppressors and their families too.

Bolado states in an interview: “Reality is worse than fiction,” meaning it’s almost impossible to write or place in a movie the tragedy of the Operación Condor.

The camera captures the beauty, but remains rigid and stiff, giving an intentional and unnecessary claustrophobic effect to the film, leaving us to wonder for something else to happen, but nothing else is happening.

The editing lost its tempo, it needed to be organic, logic, and balanced with a better structure to make the sequences more harmonic to create a significant impact of the situations of agony experienced by the main characters. A stronger dramatic punch was needed it.


There are similar films on the subject of repression and torture, the Argentinean Oscar winner “The Secret in Their Eyes” (2009), the also Argentinean brutal film “Garage Olimpo”(1999) directed by Marco Bechis, and the Mexican production “The Violin” (2005) directed by Francisco Vargas. All of these films projected the hunger for justice people have for those atrocities to be recognized.

The most significant accomplishment of “Olvidados” is its strong message about how people lived and died. And how the very few of the lucky ones survived the repression caused by the absurd policies implemented by the Condor Operation,

“In the Fade” “Revanche” in Hamburg
“The Square” An “Exit Through the Gift Shop”
The Best Latino Performances in Movies of 2016
“Ixcanul” Pursuits Guatemala’s First Oscar® Nomination
“Güeros” A Lyrical Love Letter to Mexico City
16 Latino Submissions for the Academy Awards® 2015
Can “The Revenant” Be a Good Oscar® Contender?