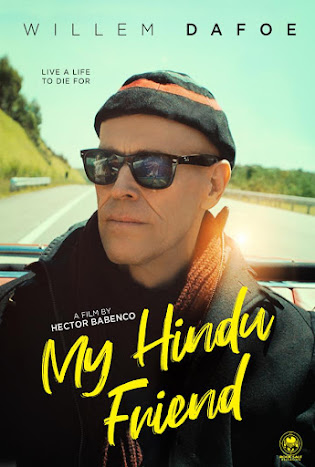 “My Hindu Friend” is elegant and cinematic celebration of life at the end of one man's journey with gratifying visuals. Hector Babenco last film, is a conciliatory testimony with his work, friends, and close ones, with a high sense of respect.
The insightful reflection about the life and death of one of the most beloved Brazilian-Argentinean directors is immersive, and goes beyond the bounds of a delirious reality.
Willem Dafoe’s execution is a tour de force. He plays the director's life, who is on a quest for redemption, exceptionally. If you think Antonio Banderas in his Oscar-worthy characterization of Pedro Almodovar in “Pain and Glory” was remarkable, the performance of Willem Dafoe portraying Hector Babenco is fascinating, hypnotic.

Without self-pity, Dafoe's fictional character, Diego Fairman, is a conflicting, selfish filmmaker who blames others for things that are out of his control – including his lymphatic cancer.

In the urgency for a bone marrow transplant, his brother Antonio (Guilherme Weber) is the only person who lives nearby with compatibility.

Antonio feels that Diego blames him for the death of their father and the misuse of their family’s money. Far-off, the brother became the medulla donor with a costly price tag.

The family liaisons don’t go well. In private, everyone feels betrayed. His surrounded friends also have problems dealing with the stressful situation of Diego going under surgery. The treatment will have an unknown outcome.

“My Hindu Friend” original dark humor lightens the awkward moments of Diego's fight against cancer. Diego’s witty personality guides us to unexpected places. The performances and the settings work together harmoniously, enriching the flamboyant and pristine look of the film.

At the hospital, he meets some stimulating characters who will help Diego on his transitional stage, including a symbolic gatekeeper, the death, and his new Hindu friend.

In terms of separation of the body and soul, every doctrine has different interpretations. For Diego, being Jewish is a confrontation between the predetermined religious beliefs versus his precepts.

Babenco's last work makes us feel the experience of a dying man vividly. All he wants is to have another opportunity to produce one more film and redeem himself.

“My Hindu Friend” exquisite soundtrack is composed by the extraordinary Polish musician Zbigniew Preisner, who worked closely with Krzysztof Kieslowski in "Three Colors: Blue, White, and Red" and "The Double Life of Verónique," among other transcendental soundtracks. The recording was done in Austria by the Vienna Symphony.

Born in Argentina and naturalized Brazilian, Babenco is not afraid of talking about his active sexual life - he shows, without any inhibitions, the beauty of a women's naked body in a poetical form.

Babenco accomplishes, with a high grade of mastery,  his personal experiences to the big screen in a very intimate atmosphere with his minimalist settings.

The filmography of Babenco includes his Oscar-winner masterwork “Kiss of the Spider Woman.” He is behind some Brazilian influential projects such as “Pixote,” “Carandidu,” and “El Pasado.” “Before Night Falls” and “A Play in the Fields of the Lord” represented his return to Hollywood.

“My Hindu Friend” has some references to "Pixote," a child dealing with drugs and prostitution in the streets of Saint Paulo in the late 1970s. Both films deal with loneliness, despair, and dehumanization in a society.
The character-driven, linear, semi-autobiographical piece awakens paradoxical emotions in the viewer and transcends further the legacy of a director that is no longer with us, but his work is a fundamental part of world cinema.

“My Hindu Friend” is essential, spiritually meaningful, and a well-balanced work of art ready to be discovered by viewers who appreciate the excellence in cinema.

Clara Sola: Defines Feminism and Magical Realism in Costa Rica
“Birdman or (The Unexpected Virtue of Ignorance)” Flies High
The Painted Bird: In the Dawn of the Holocaust
“Roma” Anarchy and Repression in an Epic B&W Mexican Drama
“Les Misérables” Boyz n the French Hood
‘Cyrano, My Love’ A Fine French Comedy of Love and Errors
“Parasite” Accomplishes the South Korea Dream
“Pain and Glory” Almodóvar's Blast from The Past
“Synonyms” A Good Jew in Paris
“Honeyland” The Last Beekeeper of Macedonia
“Endless Poetry” The Atypical Universe of Alejandro Jodorowsky
The Academy Museum of Motion Pictures Opens at Last
MAKEUP & HAIRSTYLING - OSCAR WEEK 2020
NINETEEN BEST FILMS OF 2019 - FESTIVAL IN LA
THE BEST FILM FESTIVAL POSTERS OF 2019

IF YOU ARE READING FROM A MOBILE DEVICE, CLICK: view web version FOR OTHER COOL FEATURES SUCH AS TRANSLATE POWERED BY GOOGLE, AN INTERACTIVE FILM FESTIVAL CALENDAR, AND MORE.
Festival in LA ©2020
Festival in LA at Monday, January 20, 2020
Share